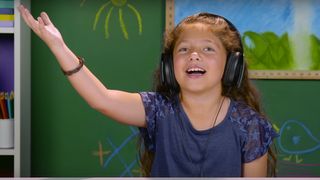 Following on from kids reacting to Guns N’ Roses, the bunch of pre-teens have now been introduced to the music of Nirvana. Born after the year 2005 (oh god!!!), these guys and girls have never heard Kurt Cobain and co. before, so listening to the likes of Smells Like Teen Spirit and Come As You Are is a whole new experience to people who probably think Foo Fighters is ‘old man music’.

Initially describing the name Nirvana as “a hippy name” and like a tropical drink, Sydney really gets into the music. And she’s not the only one, Carlin is loving pretty much every song and wants to listen to even more.

Throughout the listening session, the same comments of “calm”, “mellow”, and “chill” are thrown around to describe the music, while opinions of Kurt’s vocal ability range from “a scratchy voice” to “[I] could see him as a normal singer and a rock singer,” whatever a normal singer is.

Similarly, a number of the kids complain about not being able to understand the lyrics (Brooke-Monaé is having a terrible time of it), with the gang offering such brilliant observations as “Why are they talking about mashed potatoes?” and “Is he saying crocodile?”

Check out the full video below.

How Nirvana Changed The Face Of Rock Music Forever