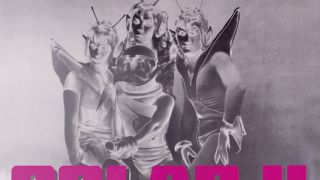 Though released during the height of post-punk, neo-prog and new wave, Timeless belongs to a whole other era entirely: the shimmering, glitter-dusted spectacle that was LA’s nascent glam rock scene centred around the Sunset Strip and Rodney Bingenheimer’s English Disco club, where this trio of beautiful freaks were employed as the house band circa 1973⁄74.

Ostensibly a collection of demos recorded during a time when they shared stages with the likes of New York Dolls, Iggy Pop, Van Halen and Jobriath – and overlooked by every record label in America in the 70s – Timeless is nevertheless a thrilling glimpse into Zolar X’s self-mythologising world. Formed by guitarist Ygarr Ygarrist and fronted by “mime/robot”and son of a Kentucky coal miner Zory Zenith, Zolar X inhabited their own other planet entirely. In fact, even before the band, the enterprising Zenith enjoyed a brief period of notoriety around LA as “Billy McCartney, cousin of Paul.”

From day one, Zolar X had their own look (part Ziggy Stardust, part The Boy From Space), their own language (an lexicon of alien-speak called Zolarian) and a carefully constructed inter-galactic back-story – all delivered unnervingly straight-faced. But it’s the music that matters, and Timeless is an opus brimming with prog rock ambition, proto-classical intricacies, a sci-fi narrative and urgent, pre-punk energy. Their two musical touchstones were Bowie and Beethoven: on the one-hand fantastical, escapist and contrived, on the other epic and expansive. After the backmasked montage of voices on album opener Recitation (then still a relatively novel studio technique), Rocket Roll blazes like a comet, Science struts like a peacock dipping a toe in the Sea Of Tranquility, and the title track offers one hundred and twenty seconds of pomp-pop built on power-chords, space-age siren-sounds, Who-style drum fills and Ygarrist’s searing guitar solo. And who couldn’t love a song called I Pulled My Helmet Off (I’m Going To Love Her)? Quite a lot of people as it happens, because despite the brilliance of this album, Zolar X fell apart, unknown and obscure, a year before its release.

Such bad timing was reflective of their career as whole, the band continually beset by bad luck, drug addiction and prison: Zenith was spotted in Vegas doing an Elvis tribute act, and later landed a ten year prison sentence for repeated domestic violence. A fascinating 2007 documentary, Starmen On Sunset, has yet to be released.

But Timeless still sounds fresh, ahead of the pack and fuelled by a naive belief that rock ‘n’ roll wins in the end. And perhaps it does: Zolar X are still going, and a re-issue on Jello Biafra’s Alternative Tentacles label a decade ago has helped find a new audience for this utterly odd and terminally overlooked space-prog masterpiece.