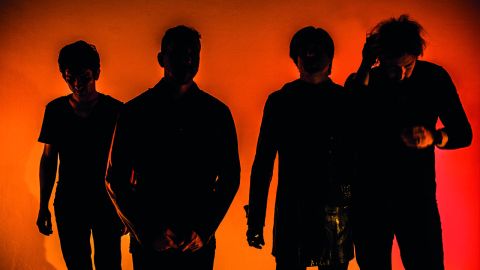 These days, people throw the ‘supergroup’ label at any bunch of vaguely recognisable roleplayers jamming with a dude who spent some time on a club tour with an ageing hair metal band in the late 90s. A quick eyeballing of Gone Is Gone’s personnel, however, and it’s impossible not to get excited. With members of Mastodon, At The Drive-In and QOTSA filling out the ranks, one can assume the vibe will be anything but formulaic.

Gone Is Gone is many things, but a traditional metal album isn’t one of them. The EP hews closer to the loose structure of a movie score; taken separately, the tracks feel fragmentary and unfinished, but as a whole, Gone Is Gone takes on a sprawling yet thoroughly absorbing cinematic scale. Little surprise, considering that Tony Hajjar (ATDI) and guitarist-keyboardist Mike Zarin formed the band after scoring film trailers and video games together. Tapping into a brawny amalgam of bruising metal riffs, lush atmospherics and spectral washes of psychedelia, the two invited guitarist Troy van Leeuwen (QOTSA) and Mastodon vocalist/bassist Troy Sanders to take the sound in a more ambitious, band-oriented direction.

Refreshingly, the result isn’t some midpoint between the artists’ primary bands, but a bludgeoning and immersive melodic experience that draws generously from the musicians’ respective strengths without sounding lazily derivative. Violescent roars with a clatter of dissonant feedback and the thud of the kick drum before blasting off into a chugging, fuzz-drenched stomp. Steadied by Sanders’ gristly basslines, Troy van Leeuwen’s rangey tonal experimentalism alternates between slow, dramatic bends and hummingbird-paced bursts of speed-picking. The transfixing Starlight delivers polished, memorable hooks and lustrous melodies and fragile lyricism like ‘I’ll stay/I’ll wait tonight/Floating in nothing’, its appeal proving undeniably mainstream.

Sanders’ voice offers the most familiar reference point and the record’s thrumming, mid-tempo muscularity doesn’t pitch far from Mastodon. ATDI fans will also find much to love in the band’s dizzying emotional catharsis and their exhilarating sense of all-or-nothing urgency, particularly in the grinding devastation of heavier fare like Praying From The Danger or the snarling bite of One Divided, which spirals into a vortex of tree-felling riffage and clattering post-rock deconstructionism before hurtling into its final chorus. This Chapter stands as the record’s arresting highlight, gradually unfurling into a bluesy and spellbinding psych-infused voyage, slowly tripping through Pink Floyd’s gauzey cosmic ether.

Gone Is Gone falls short of stylistically comparable post-metal epics like Sólstafir’s Ótta or Anathema’s Distant Satellites, leaving too much territory unexplored. But considering that it’s not a full-length release and that the band have subsequently debuted new tracks in their live show, it offers not only a uniquely evocative post-metal headtrip but an exotic taste of something thrilling and suggestive of heroic possibilities for their next move.

How much of the album was written by the time you all met in LA?

“All the music was recorded before Troy Sanders came in to record vocals. When he did come in we knew that he would be the one that would be our missing link.”

How did the sound change when the four of you finally got together in the same room?

“Troy’s vocal melodies helped us continue our path to being a band that can sound cinematic. We all had that end result in mind, which was to take everything we started to the next level.”

What qualities were in the early demos that caused Tony and Mike to see potential beyond just a film trailer?

“The trailer composition that started this was one that kept on getting used over and over again in different kinds of movies. The thought was it had a lot of reach as an instrumental, so why not try some vocals on it and see how it can sound as a completed song? It had the capability of being used in diverse ways.”

What moods were you trying to create with the industrial dynamics and spacious atmospherics?

“The mood is obviously dark with undertones of things changing for the better. We have always pictured space and Icelandic landscapes when writing our music.”

What was the inspiration for bluesy, softer parts of this chapter?

“It’s encompasses the sound we are aiming for in the future. So much thought went into just the intro of the song. We are really happy with how it all turned out.”