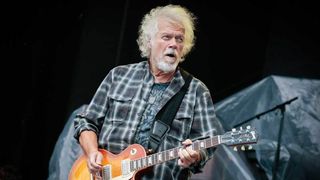 Randy Bachman has a career that goes back 50 years, to when The Guess Who had their first hit. Since then, the Canadian icon has had consistent success, not only with the aforementioned band, but also with the blues-rock rollercoaster that was Bachman-Turner Overdrive. Songs like American Woman and You Ain’t Seen Nothin’ Yet have become part of rock’s folklore.

He’s one of my all-time musical idols. And I got to play with him on the BTO album Head On in 1975. I needed a piano player on a couple of tracks. I told my manager that it would be great to get someone like Little Richard, and he said: ‘Well how about the man himself?’. He’d just done a club show in Toronto, where we were recording at the time, so after a lot of negotiations, it was arranged that he’d come down to the studio.

The day arrived, and no Little Richard. Hours passed and I picked up a guitar and started strumming. Then someone told me he’d finally shown up. Now, at the time he was always introduced onstage by his band starting up Lucille. So, as a tribute I began to play that classic. In walked Little Richard. He was dressed in an orange jump suit, with an orange cape and a big ‘R’ in silver on his chest. He heard me playing Lucille and got really angry. He yelled: ‘I ain’t staying here for some white boy to make money from my song. I’m leaving!’ I had to calm him down and explain that this wasn’t the song I wanted him to play on.

Now, the fun began! The songs were in the keys of A, D and E – simple, or so I thought. But he couldn’t play those chords. He could only play in C. Therefore, I had to use some clever trickery. He was getting so stressed out about the whole thing that we began to jam around on his own songs, just to ease the tension.

I then got the idea of actually slowing down the tape for one song, Take It Like A Man, so that it worked in the key of C. And we got a take, even though Little Richard thought we were just rehearsing. When I played the song back to him, at normal speed, he was amazed. ‘Who’s playing piano?’, he asked. ‘It’s you,’ I replied. ‘Hallelujah!’ he shouted, ‘Randy Bachman’s taught me to play in the key of A!’ He was so fired up that we did the other song as well – Stay Alive. It was only after this was done that I told him he’d been playing in C all along, and that I’d used technology to change it. He was so furious that he stormed straight out!

In 1969, The Guess Who played at a three-day event called the Seattle Pop Festival. Everyone was on the bill: Led Zeppelin, Ike & Tina Turner, The Doors, The Byrds. And Bo Diddley.

Now, nobody ever filmed or recorded the festival, which might sound amazing, but it was true. There were also no posters, only a few handbills. I was lucky enough to have one. I met Bo Diddley just before he died in 2008, and I went up to him and said: ‘Mr McDaniel – his real name is Elias McDaniel, and it seemed a bit odd to be calling him Mr Diddley – do you remember playing the Seattle Pop Festival? Well, I’ve got a handbill from it that I’d like to give you’.

He was just so grateful, because as I said there’s no recorded evidence that it ever happened. “Oh, thank you,” he said. “At last I can prove to my grandchildren that I was on the same bill as all those great bands. They always thought I was lying!”

I never got to meet him, but that’s a story in itself. It was thanks to seeing Elvis doing Tutti Frutti on TV that I gave up the classical violin and took up rock’n’roll. Years later, I wrote the song Takin’ Care Of Business for BTO. Elvis heard it on the radio and liked it so much he adopted it as his anthem.

Anyway, when BTO were falling apart, we were offered the chance to meet Elvis. Well, the rest of the band were told about the meeting, but things were so bad between us that they never told me. So off they went to meet the man. First thing he said was: “Where’s Randy Bachman, the guy who wrote that song?” They said: “Er, he didn’t wanna come along”. I was devastated when I found out what had happened. This was the man who changed my life! But when Elvis died, one of his entourage gave me a solid gold pendant that he always wore. It had the letters ‘TCB’, with a lightning flash through it.

When I was in The Guess Who, we found out about this English band called The Who and were determined to force them to change their name. So, we were in London and The Who were playing at The Marquee club. Down we went to confront them. They were being filmed for German TV at that show, so we had to wait around for about four hours. Eventually, we get to meet them and say: “Look, we were here before you. So, change your name, it’s confusing people.” Pete Townshend looked at us and replied: “There’s The Yardbirds and The Byrds. Nobody’s confused by that. So bugger off.”

The two bands actually became great friends. And that phrase ‘bugger off’ was our in-joke. We’d check into a hotel and find out The Who were there, so we’d call up one of the guys at 3am and when they answered we would say: ‘Bugger off!’ then hang up. They’d do the same to us.

I did a telethon in Toronto – one of those marathon TV charity experiences. Eartha Kitt was appearing, and the dressing room facilities were poor. So, she collared me and asked if I’d hold up a coat round her while she changed into her stage gear. So, there I was, holding up a coat while this beautiful woman got naked.

When she finished her stint, Eartha asked me to repeat the process. As I stood there, she wriggled out of her costume, stood there for a second and then said: “This is what you wanna see!” and promptly turned round right to face me – I got a major eyeful of her nude. And she had a great body. What could I do but rush straight to my room and relieve myself!

I also saw Tina Turner naked, but that was by accident. It was at the Seattle Pop Festival. I was watching the show on a raised platform, and Tina got changed at the side of the stage, while the Ikettes held up a blanket round her. But my view was excellent – fantastic legs!

BTO were due to play a show in Boston and the local promoter asked if we’d mind having a young band called Aerosmith open for us. We checked them out, and they had a song on the radio called Dream On at the time. It seemed quite good, very Zeppelin-esque, so we agreed.

Here we were in our dressing room before that gig, when in walked this clown. He was dressed in silk pyjamas, had huge shades on and was trying to high-five everyone. How he got past our security I do not know, but we told him to get straight out. “Hey man, I’m…” he tried to explain. “GET OUT!” I shouted, “No, you don’t understand…” he tried again. “OUT!” I repeated, pushing him into the corridor. That was the first time I met Steven Tyler. Now whenever I see him, the first thing he says to me is: “OUT!”

I grew up in Winnipeg with Neil, and one of the biggest influences were The Shadows. In 2000, I found out that Sting was putting together a Shadows tribute album called Twang! I called him up and asked if Neil and I could be on it. He said that there was room for one more song. So I got hold of Neil, who was up for the idea. Trouble was all the classics were gone. Neil suggested we did Spring Is Nearly Here, which I couldn’t recall at all.

I went through all my Shadows records – and I have loads – but couldn’t find this anywhere. I tried to persuade Neil to do something else, but he was insistent. Eventually I confessed that I had no recollection of the song. Neil said: “We heard it on the local radio in 1964, so just think back to then”. Well, to cut a long story short we managed to record our version, but one guitar part Neil did just jarred a bit. He refused to change it, so cunningly I took home the tapes, fixed it and sent the new version to Neil, not expecting him to notice anything. I then get a call from his manager: “Neil wants the original recording used!” He had picked up on it right away.

A few years later, I met up with a couple of The Shadows and apologised to them for the way our version sounded. They just laughed and said: “Oh, it’s the way we always sounded when we played live.”

I grew up in the snow of Winnipeg wondering what sort of place would inspire a band like the Beach Boys. Sun, surf… all that was alien to me, But I knew Brian was a genius. I got the chance to tour with the Beach Boys just when he’d come out of mental hospital and was gradually getting back into real life. It was an experience to be around at the time. There was so much love and affection from the rest of the band towards him.

Brian used to have the hotel room next to mine, and that was when he was with the psychiatrist Eugene Landy. Now, he’d rigged up a hidden microphone in Brian’s room, with an amp in his own, so that he could hear when Brian went out. The problem was that he was like a child and would walk in straight lines and get lost. So Landy would follow at a discreet distance behind him, and make sure he got back OK.

Just to be there as Brian slowly got back his faculties was such an honour – a triumph for the human spirit.

What an intimidating man. I was in the Capitol Studios in Los Angeles, and he was expected in. Now, his engineer hadn’t turned up, so the guy I was using agreed to set up Sinatra’s microphone and help out. In walked Sinatra, did one take of the song, and then my engineer said innocently: “Can we do another take, please?” Sinatra looked at him, and said: “What’s your name?” He replied, “Mark Smith”. “OK,” responded Sinatra. “That’s ONE. You get one mistake with me and then you’re out.” It seemed that the man only ever did one take of any song. You never got a second one.