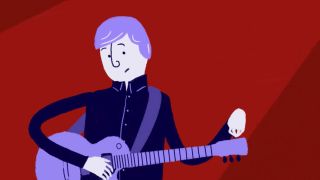 An animation from New York-based storytelling website Great Big Story has explained the origins of The Guess Who’s 1970 hit American Woman. While the story itself is familiar, this is the first time the tale has been told via the medium of cartoon. As the animation reveals, the story starts as band founder Randy Bachman breaks a string during a last-minute gig at a curling arena in Canada. Tuning up afterwards, he accidentally comes up with that classic chord progression.

“I’m going ‘Oh My God, I don’t want to forget this riff’,” says cartoon Randy Bachman. “So I stand up and start playing, and I turn my guitar up, and I’m playing it louder, and I look into the audience, and I yell out [to vocalist Burton Cummings] ‘Sing something! Sing anything!’. And the first thing he sang was, ‘American woman! Stay away from me!’” And the rest is history.

Previous videos from Great Big Story include That Time Ray Charles Beat Willie Nelson in Chess, and a story about the Khun Narin Electric Phin Band, a psychedelic rock outfit from Thailand.