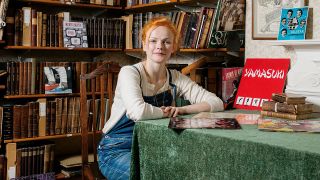 The star of such TV gems as Shameless, Dinnerladies and Silk takes inspiration for her roles from the theatricality of prog rock. “It’s that same leap of imagination,” she reveals, thinking back to summers of prog, magic mushrooms and Star Trek on the telly…

“In our house, there wasn’t much music. My mum was into Billy Joel and Frank Sinatra and my dad liked Randy Crawford and The Drifters. Then there was the New Romantic scene, which I didn’t really like. So I was always looking for something different. Me and my mates from school all used to go to a pub in Bolton called The Boar’s Head, and there was a lad there called Gaff. He looked different to the rest of them – dressed all in denim, with long hair, a little goatee beard and desert boots. And on the back of his denim jacket he had a picture of Angel’s Egg by Gong. I had no idea who Gong were, but I was fascinated by him. One night I went over and he starting telling me about them. So the next day I went down to X-Records in Bolton and bought myself a copy, then went home and put it on. It was like, ‘Bloody hell! What’s this?’ I’d never heard anything like it before.

There was a heavy metal scene at a club we used to go to called Sparrows. And there was a kind of offshoot of that, led by Hippie Darren and Hippie Steve, who shared a flat just outside the town centre. My friend Karen used to knock about with Hippie Darren and we’d go to their flat and take magic mushrooms. Then they opened me up to more Gong and Hawkwind, and we used to watch old episodes of Star Trek on VHS. It was summertime as well, and I always thought prog was something best listened to in the summer. There was a certain romanticism about it. As a kid I’d always been fascinated by folklore and fairies and pixies, that idea of other worlds. And that’s what I think prog did: it opened up a different world. There were elements of English folklore, nature and a sense of spirituality about it too. And there was a great theatrical side to prog, which encouraged you to use your imagination. You can let it run wild, even without taking magic mushrooms!

I became fascinated with the sound of those records. I’d listen to Hawkwind, but didn’t really get into the whole manifesto side of the band. I last saw them a few years ago at the Green Man Festival. Everyone was flocking to the main stage to see Wilco, but we were off to see Hawkwind do their thing. It was hilarious! The songs went on forever but they were brilliant. They had all the girls in their white outfits and everything. It was very prog, almost on a Spinal Tap level.

Aphrodite’s Child’s 666 is one of my favourite records. I discovered it five or six years ago and was shocked when I found out Demis Roussos was in the band. I had to convince a friend of mine that it was really him. One of the songs – I think it’s Ofis – sounds like a Greek version of Mark E Smith. Some of it’s almost too weird, then it suddenly breaks into a great rock song with melodies. I’ve recently been doing a radio play over in Saddleworth, so I’ve been listening to 666 again while driving over the moors. I nearly ended up crashing a few times! But some of the poetry in it is beautiful and I really admire the actress [Irene Papas] who does her thing on Infinity. Did she really have an orgasm on that track? My God, she’s brave! There’s another one like that on [The Pretty Things’] SF Sorrow. Prog quite liked those kinds of songs, with women getting very, well, over-excited.

I can’t remember where I heard about this great Yamasuki Singers album, Le Monde Fabuleux Des Yamasuki. It’s from 1971 and happened when two French guys [Daniel Vangarde and Jean Kluger] got a children’s choir together, a bit like the Langley Schools Music Project, but then you have this sumo wrestler shouting on it too. It sounds like it should be a disaster, but it really works. Somebody told me that Bananarama did a cover of one these songs [Aie a Mwana].

Then there’s Louise Huebner’s Seduction Through Witchcraft [1969]. I suppose this is linked into the Eccentronic Research Council album [1612 Underture, a new multimedia piece about the Pendle Witches, featuring Peake, Adrian Flanagan and Dean Honer], because she talks about witchcraft and the power of the female. A lot of it is spells, one for a full moon rising that includes a splash of olive oil. Some of it’s very strange, but she’s got a very lovely, sexy voice. Which you could never say about mine. They say everyone has some kind of singing voice, but not me!

Another band was Wicked Lady, who were a three-piece from Northampton. Very big with Hells Angels apparently. The Axeman Cometh [recordings from 1968 to ’72] is quite heavy and hardcore. One of the band members was called ‘Mad’ Dick Smith and did end up in an institution. Some of the stuff about them is priceless. Martin Weaver, the singer, says: ‘Yes, I did punch an A&R man, but only because he said my girlfriend had legs like a footballer.’

Is there a connection between the theatricality of prog and being an actress? I think so. It’s that same leap of imagination. I saw [trippy Japanese noiseniks] Bo Ningen recently in Manchester and had an epiphany while I was watching them. Without being pretentious, the best musicians are those who manage to get a bit of their soul over to you. And as an actor, you can learn about theatre from live performance. Watching Bo Ningen was like watching creatures from a different planet. They had so much presence and it was very theatrical. There’s something about the raw power you get from a band that you can use as an actor – depending on the play, of course. Though it might not work quite as well with Noël Coward!”