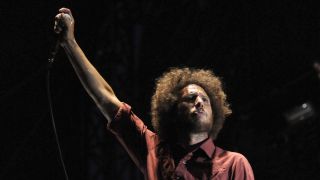 Rage Against The Machine frontman Zack De La Rocha turned 48 today. To celebrate this momentous occasion we decided to take a look back at the great man’s life and present these ten reasons why he is a true hero. Happy birthday Zack!

He Was The Mouthpiece Of One Of The Greatest Debuts Ever

So unless you’re some sort of cave-dwelling simpleton you’ll know that RATM’s self-titled debut is one of the finest albums ever. And, although much of the jaw-dropping impact was due to the incredible chemistry between the members and the previously unheard guitar work of Tom Morello, much of that has to do with the pure fiery fury spat from De La Rocha’s mouth. In a metal world dominated by Sunset Strip bands banging on about how many girls they were going to ogle that night, grunge bands crying into their plaid jumpers or trad-metal acts pretending they were about to be attacked by dragons, Zack turned the rock world into an arena where it was okay to sing about things that were real and, you know, actually meant something.

He Perfected The Art Of Sloganeering In Rock

He wasn’t the first person to do it, but when he penned the infamous ‘Fuck you I won’t do what you tell me!’ Line in Killing In The Name Zack started a trend in rock music for bands attempting to capture the feeling of an entire generation in one easily quotable line. Korn just elongated it a bit with their ‘Fuck you I’m fed up with you, I’m not as good as you, fuck you I’m better than you’ line in Divine, Machine Head made it a bit more literal and a lot more violent with ‘let freedom ring with a shotgun blast’ from Davidian and Limp Bizkit, predictably, made it more ridiculous by letting Fred Durst inflict ‘Give me something to break’ from Break Stuff on an unsuspecting public. All tried, but none matched the sentiment or inspired delivery of Killing In The Name.

Better People Than You Love Him

A good barometer of how well respected an artist is would be to look at the sort of people that they have collaborated with. In that respect De La Rocha has got one of the most impressive CVs in music, having worked away from Rage with true cultural icons and geniuses such as KRS-One, Chuck D, Trent Reznor and DJ Shadow. He also worked with former Mars Volta drummer and human octopus Jon Theodore on his One Day As A Lion project. Plus Rage have been joined onstage over the years by everyone from Cypress Hill to Tool’s Maynard James Keenan. Seems like everyone in the music business loves our Zack.

He Backs Up His Words With Actions

It’s not hard to write a protest song. Any schmuck or member of Green Day can watch the news and write a vague and ill-educated bunch of politically-motivated tunes (that may or may not be called American Idiot) and sit back whilst trying to look like a revolutionary voice. Zack doesn’t do things by half, though. Be it heading into the jungle and living and working with the Zapatista movement in Mexico or addressing the UN in protest to America’s treatment of wrongly convicted activist Mumia Abu-Jamal, he certainly doesn’t do things by half. These are no half-arsed attempts to appear edgy, this is real life to De La Rocha.

He’s One of The Best Frontmen In The Game

Rage Against The Machine’s live shows are the stuff of legend. And standing at the front, working the crowd from the barrier to the back, is Zack. Watching him in action is an electrifying experience, a constant barrage of movement, rhymes and that louder than hell roar. He’s a unique presence and is able to inspire any field, festival, stadium or club to lose their shit despite rarely addressing the crowd directly. Some people work hard on stagecraft, some are just born with the charisma to dominate. Zack is definitely the latter.

He Was Schooled By Classic Punk Rock Bands

Rage are usually associated with their mix of hard rock riffs with rap vocals. But De La Rocha was actually inspired to start making music by attending punk rock shows in his formative years. He loved The Clash, and was present to see life-changing events like watching the likes of Bad Brains, Teen Idles, Minor Threat and The Dead Kennedy’s. This in turn led to him joining straight edge hardcore act Hardstance, who later became Inside Out.

He Inspired A Generation Of Vocalists

They weren’t the first band to meld rock and metal, but in RATM’s unique frontman rock had its first properly rapping rock star. Without De La Rocha’s trailblazing, bands like Stuck Mojo, Downset, (hed)pe, Orange 9mm and even Biohazard may have sounded very different. It can even be traced forward to modern outfits like TRC, Enter Shikari and Hacktivist and their outspoken and politically-minded vocalists. You could also blame him for Fred Durst… But we we’ll give him the benefit of the doubt, eh?

He’s Got A Way With Words

We all know about the content and the slogans in Rage’s music. But we should take a minute to celebrate some of his finest rhyming couplets. Proclamations like ‘I’m rolling down Rodeo with a shotgun, these people ain’t seen a brownskin man since their grandparents bought one’ manage to be catchy, angry, violent and cutting all at once. He can also be very funny, in Tire Me De La Rocha manages to introduce sarcasm and satire into his lyrics with ‘I wanna be Jackie Onasis, I wanna wear a pair of dark sunglasses’. He doesn’t though! He’s taking the piss! Good one, Zack! Classic!

He Won’t Sugarcoat Anything For You

When Rage reached number one in their battle for the top of the 2009 Christmas charts they were exposed to a lot of mainstream outlets that were probably unfamiliar with their lack of compromise. One such outlet was BBC Radio 5 Live, who invited the band on to play Killing In The Name live on air. As long as they cut out the bad language. Zack, but of course, did anyway… In fact he might have chucked a few more f-bombs in for luck. Fuck you I won’t do what you tell me, indeed.

We Still Haven’t Given Up On Seeing Him Again

While Rage have seemingly disbanded once again, their last show happened at the LA Colliseum on the 30th of July 2011, there is still a chance that we may see them again. De La Rocha has been quoted as saying that the bands relationship personally is ‘great’ and that ‘when you get older and look back on tensions and grievances now you have a different perspective on it.’ So it seems the door isn’t slammed shut entirely for Rage as far as he’s concerned. Let’s hope not. That’d be a great present for everyone.