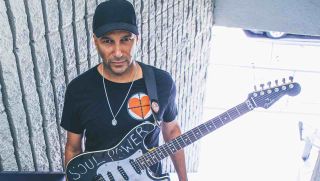 Rock star, revolutionary, nerd: Tom Morello is all of these and more. We spoke to Rage Against The Machine guitar hero and solo firebrand to find out what 30 years manning the barricades has taught him.

“It’s true that hip hop, pop and R&B are more popular than rock music these days. There will always be great rock’n’roll, but it’s no longer the dominant genre. But times change and trends ebb and flow. The thing is, metal will be here long after other genres have come and gone. Sure, it’s level of popularity isn’t at a peak right now, but that’s all the more reason for those of us who believe in it to keep making the music we love.”

The guitar solo is dying

“I’m disgusted by the fact that a lot of young people these days aren’t willing to sit down and practise the electric guitar for eight hours a day. They are all looking for an easier route to becoming famous. Look at the Top 50 songs on the radio in the US – there are no guitar solos in them. I see [Tom's 2018 all-star solo album] The Atlas Underground as a Trojan horse. I want it to turn a new generation of kids on to cranking up the guitar.”

America is breaking. But it’s not broken.

“We’re in a very dark time right now. It’s like we’re in Pompeii with Vesuvius exploding and the only ship out of town is the Titanic. But there’s always hope. There are two constants that I’ve seen from the time I started making music with Rage Against The Machine. One is the rampant injustice around the globe. The other is the resistance to that injustice.”

The revolution needs you

“We are at a crossroads in our planet’s history, with impending environmental disaster, racism and anti-immigrant sentiment on the rise, a dangerous whiff of fascism in the air. So now, from the moshpit to the dancefloor, it’s time to do something about it.”

Direct action has its place

“My personal leanings are pacifist in nature and I’m not at all a violent person. But look at the ANC – they fought a violent campaign against the racist apartheid system in South Africa. I’m not going to say that they’re wrong. I would prefer a world that’s changed by peaceful means, but that’s not always how the world is changed. I live in a country that was founded on violent revolution.”

“People should be less concerned with the strategies of what they need to do and just focus on making great music that they believe in. That’s your only responsibility as an artist: to make something that you care about, something you think will be great or beautiful or will kick ass. That’s it. That’s your only job.”

Revolutionaries are created, not born

“I can’t say if I inherited the activist gene from my dad [Kenyan guerrilla fighter-turned-diplomat Ngethe Njoroge]. I didn’t meet him until I was 30, so he never sat me on his knee and told me stories of what he did, though his example loomed large. I’d say my politics were very street orientated, in that I was the only black kid in an all-white town. Politics found me very early in the playground.”

“I’ve known and worked with people who have suffered from depression and mental illness, and it feels like we’re at an important crossroads right now where those things are coming out of the dark and losing the stigma they once had. The most important thing is to not suffer in silence. Seek help from friends, family, professionals. That itself can be a battle, but a lot of time your life may depend on it. But always know that you’re not alone, that there is help available and people who care about you and love you and would like to be part of a solution.”

“Would I ban cell phones from gigs? Well, if things are crazy enough, you would probably be a fool to get yours out. My job is to make sure, whether it’s in the moshpit or on the dancefloor or wherever, that people are going so apeshit they’ll put their stupid phones away and just live in the moment for a second.”

The 1990s changed everything

“It was a decade where so many unusual bands got a platform, from Rage to Jane’s Addiction to Tool, Nine Inch Nails, Soundgarden… These were all bands that did not fit any previous mould of what rock stars should look like or sound like or behave like, yet they found a global audience. And they were bands with ideas. They had a foot planted in the punk rock ethos. They were different to the typical rock’n’roll clichés.”

“I know there tends to be an inherent criticism in hard rock about bumping up against other genres, but there are a lot of rock and metal fans that rejected Rage Against The Machine for that reason. That didn’t stop us from making music that was true to our hearts. What I wanted to do with this record is combine artists of different ages, different genders, different ethnicities. That in and of itself is a powerful statement. Especially when you strip away a lot of the synthesisers and replace it with kick-ass rock’n’roll guitar.”

Don’t be someone you’re not

“When I moved to Hollywood, I thought, ‘I can never be in a band here – I’m not anything like these guys. I’ve never done drugs, my hair doesn’t look like those guys’.’ But I made the decision a long time ago to be the person that I am and let the chips fall where they may, and fuck you if you don’t like it.”

“I do love Star Trek, I do love Dungeons & Dragons, I do love Lord Of The Rings and R2-D2… But I can write some riffs, too. You can be both. Or either.”

B-Real really does smoke as much as you think

“I’ve known the guys from Cypress Hill for years, and one of the pleasant reveals of being in Prophets Of Rage with B-Real is his level of political awareness. He embraces the cause with the same grip that he holds a joint. He’s a tremendous MC and a great friend, but a lot of times I’m so bewildered with second-hand smoke intake that it’s hard to be able to tell what’s going on.”

The bad news: the music industry has completely changed

“In this current climate, there really is no record industry. If a new Metallica or a new Rage Against The Machine came along, there’s not the apparatus to shove it down the world’s throat that there was 20 or 25 years ago.”

The good news: the music industry has completely changed

“The distribution of music is much more democratic. You, me and the guy walking down the street outside can all make an album on our phones, we can all have a Facebook page to put it out there.”

Longevity is a mystery

“Don’t ask me why I’ve lasted so long, because it’s hard to say. I guess for me it’s always been about having my priorities intact: challenging myself and being really honest about the music I make.”