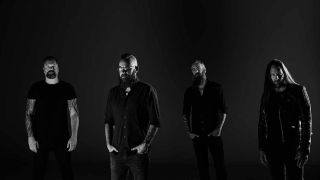 Standard bearers for Swedish heavy music over the last 20 years, In Flames were instrumental in putting their home city of Gothenburg on the metal map. 26 years into their career, the band are poised to release a new DVD, Sounds From The Heart Of Gothenburg, which documents their triumphant homecoming show at Gothenburg’s Scandinavium venue in November 2014. A thrilling stampede through In Flames’ huge and diverse back catalogue, it’s another major milestone for these hugely influential melodeath veterans. We spoke to vocalist Anders Fridén and guitarist Björn Gelotte about the new DVD and the city that changed metal forever.

Why do you think Gothenburg became the centre of such an important period of evolution within metal?

Anders: “I think because we didn’t know any better! A lot of people were hanging out and forming bands, trading ideas back and forth, and we sort of inspired each other, you know? Someone would create an awesome demo and you got it and thought ‘Yeah, now we’ve got to top this!’ It was all friendly and healthy competition. And we had a lot of shows. If you didn’t play yourself you helped out with the stage or the front door. We just didn’t know any better. We took the inspiration from the Florida death metal scene and from Stockholm, where things started happening earlier than in Gothenburg, and we took that scene, that sound, and did a mish-mash of that and the New Wave Of British Heavy Metal and the German thrash scene… we just stole ideas and turned them into something of our own! It was just our interpretation of metal. It’s easier now, after so many years, to just see the good side of those early days and the bad stuff just disappears.”

Was there much of a metal scene in Gothenburg before you guys and At The Gates started making waves?

Bjorn: “There was a scene going on, but at the time we started I think Stockholm was the more prominent metal city. Those bands were a little bit more punk and dirty, that style of metal, with the Sunlight Studios stuff and all that. We wanted to do something else, maybe not more hi-fi, but a little bit cleaner sounding and using melodies more than aggression, perhaps. Along came a producer called Fredrik Nordström and he managed to get all these bands in shape and sounding different from the Stockholm sound.”

Was there a sense of competition with Stockholm?

Anders: “There’s always been a rivalry between Stockholm and Gothenburg because Stockholm is the capital and Gothenburg is the next biggest city. In sports there’s a big rivalry and I guess also in music, but it was more friendly for us. When the bands came down here we all played together and had a good time supporting them. I remember playing with Dismember and Entombed and going to shows where we saw Unleashed and Tiamat and all those bands. We were fans of them and we looked up to them, so it wasn’t a ‘fuck them!’ thing. Earache Records picked up Entombed pretty early on and they were the first Swedish extreme band to get that recognition and that was really inspiring. Then a lot of other Stockholm bands like Tiamat, Unleashed and Dismember all got signed, so we knew it was possible that if we got good enough, maybe we could get signed too. They really opened doors for the rest of us.”

Was there a particular venue in Gothenburg that was particularly important at the start of the In Flames story?

Anders: “We had a super small venue called Valvet, which is like ‘The Vault’ if you translate it. It was run by a non-profit organisation and we all helped out. It was super punk and dirty but it was run by these enthusiasts and it was amazing. It really warms my heart when I think about that place. It was super tight and sweaty but it gave us the chance to play in front of people and that’s so important. We got to adapt to the live scene and play and play and play, and that place was definitely the start for a lot of bands in Gothenburg. It got shut down, like a lot of places. The people that run the city don’t realise how positive something like that can be. It got us off the streets! I saw Coroner, Massacre, Master, Carcass and all those extreme metal bands there and it was phenomenal, a cool environment. It was the right kind of club, like Rock City in Nottingham. It was our version but smaller!”

Does it blow your mind that you started in a tiny venue in Sweden but can now headline at Scandinavium and release a DVD?

Bjorn: “It’s really hard to get any perspective, because it’s all part of what we’ve done over the last 20 years. But it is kind of mind-blowing. I saw all the bands I wanted to see there, growing up, and maybe I imagined one day opening up for someone there, but headlining it? That was never expected. And we’ve done it two or three times now! It’s a really cool thing and that’s why we wanted to record the DVD there. The sheer size of the place… it was great.”

What are your particular memories of the show itself? Did you have a lot of things to worry about because it was being filmed?

Anders: “No, I don’t really get nervous. Obviously you feel it because you can see all the cameras. I’m glad that we documented this because there are things that I see on the DVD and think ‘Oh, that’s fucking cool!’ When people are screaming ‘Gothenburg! Gothenburg!’ it gives me goosebumps. I don’t think I remembered that happening a week after the show, you know? It’s a hard question because if I say I don’t remember anything, it sounds bad! I do, and there were a lot of emotions but we’ve done a lot of shows and they kind of blur into one another! But I’m super happy that we documented this one.”

Is the audience in Gothenburg still one of the best to play to after all these years?

Anders: “I should say yes, right? Ha ha! I mean, it’s definitely super supportive and it’s amazing that we can keep coming home and play to almost 10,000 people. That’s fantastic, especially since we started at that small venue. But I feel we have a very good and loyal audience all over the place. We’ve never focused on one particular country or continent. We’ve been everywhere! People come and people go, but the core fans are very loyal and they appreciate what we’re doing still, which is fucking phenomenal when you think about it. I never thought, when we were playing in that tiny place all those years ago that it would turn into a career and then 20 years later I’d be sitting here talking about it.”

Bjorn: “It used to be really tough for us in Gothenburg, because we had our first bit of real success abroad, so coming back to Gothenburg was like ‘Oh, here we are again… nobody will be there except for people in other bands!’ Ha ha! but that’s changed over the years. In Sweden generally now it’s really, really good for us. The crowd is diverse, it’s young and old, boys and girls, and it’s been rejuvenated. It’s a strong sign that the scene is really healthy, so it’s very cool.”

What would your teenage self think about you releasing this epic show from Gothenburg’s premier metal venue?

Bjorn: “Having done 12 records now and toured the way we have, playing with all these awesome bands, if you’d told me that would happen 25 years ago, I’d have said ‘Fuck off, are you kidding me?’ Ha ha! But I never thought I would do anything else for a living, but that’s how you are when you’re young and king of the world, you know? In the end, I went to school as an electrician, and I haven’t worked a single day!”

These DVDs are always important milestones, so what will be in the next chapter for In Flames?

Anders: “Yeah, this is the end of a chapter. We lost our drummer, Daniel, who decided that he’d had enough of playing fast and he decided to take a different path. So it’s pretty cool that we got to document this while he was still in the band. We have a new album and that is coming out fairly soon, so we’re looking forward to taking those songs on the road and, you know, just continue doing what we’re doing. We’ll see where it leads us!”

Sounds From The Heart Of Gothenburg is out September 23, via Nuclear Blast.

In Flames album review – Sounds From The Heart Of Gothenburg

In Flames: Battles was inspired by inner struggles

Under The Influence: How In Flames Changed Metal