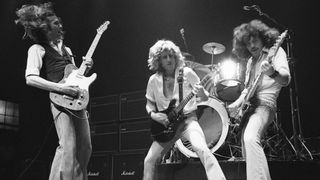 Time isn’t always the great healer. Certainly it hasn’t been for Francis Rossi, in terms of how he now views Status Quo’s definitive first live album. What bugs the Quo frontman the most about 1977’s Live! is the very thing that made the fans who bought it first time around so proud of it.

“Unlike every other live album from those days, there are absolutely no overdubs on that album, no going back and fixing the bum notes, nothing other than what we actually put out there on stage at the time,” he says. “We wanted to prove we weren’t like the others, we weren’t cheating. But every time I listen to it now, all I can hear are the mistakes. I sit here cringing, thinking: ‘I wish we’d put fucking overdubs on.’”

A lack of overdubs – a complete lack of any dressing-up whatsoever – is what gave Status Quo their unique appeal, and what gave Live! head-shaking brilliance. The fact that it was rough as a badger’s arse mattered not then, and matters even less so now.

That crowd you hear going ballistic – the Glasgow Apollo, famously the most ballistic audience in the British Isles – isn’t the product of some producer’s bag of tricks. Nor are those squawking, squealing, wheeling-dealing guitars and swing-hammer drums. That is the authentic sound of the original Quo, and you’re invited to accept no substitute.

Of course, they were one of the quintessential British live acts of the 1970s. Long before AC/DC came along, Quo were the original heads-down, no-nonsense boogie band par excellence. They released albums, from which just one single was allowed to be released, even though it was always an enormous hit. Actually they had just broken that rule with their Blue For You studio album, which became their third album to go straight into the UK chart at No.1, and from which they released three singles. Nevertheless, the fact remained: you couldn’t consider yourself a true, heads-down Quo fanatic unless you’d been to see them lay down the law live at least once.

“That’s exactly who we were in those days,” agrees Rossi. “Which is why I think the Live! album went down so well with everybody. It was like a ‘greatest hits’ album only much better. No long-form videos in those days, let alone YouTube, so the closest you could come to a genuine Quo live show without actually buying a ticket was on that album. It’s definitely us at our most rocking, that’s for sure. It was rock’n’roll all the way with that line-up, which is another reason why that live album jumps out of you. You can hear the aggression.”

It’s an attitude best heard on the album’s quintessential Quo-in-the-70s track, Forty-Five Hundred Times (one of the few songs Rossi and fellow guitarist/partner in crime Rick Parfitt sat down and wrote together). The head-pummelling version on Live! is nearly 17 minutes long. Better yet for the true Quo addict, though, is the speeded-up, heavy-hitting version of Caroline – featuring co-writer and then-tour manager Bob Young on harmonica – weighing in, via a hearteningly clumsy segue into Bye Bye Johnny, at a not so much cool as downright unreasonable 13 minutes.

But this album wasn’t some off-the-top-of-their-heads, Grateful Dead-type performance. Live! had its share of hits, too, including Roll Over Lay Down, which remains one of the few live rock tracks to become a hit single in its own right, and Rain, still one of the biggest and best Quo singles, and one of the few truly great ones written solely by Parfitt, who also sings it in his hard-as-nails voice.

“The thing is, it was a complete one-off,” says Rossi. “Not only would we never make a live album like that now, but no one else would either. In fact no one else was making live albums like that back then. So even though it gets on my nerves, I’ve got to love it really. And that audience you hear, in Glasgow. You didn’t argue with them, I tell you.”