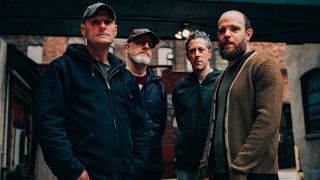 It's easy to throw around that dreaded term 'supergroup' when confronted by a new band made up of 'ex-members of'. But when that band's credentials include members of Unsane, Cop Shoot Cop, Swans and Xiu Xiu, it's fair to say 90s noise-rock line ups don't come much more super than Human Impact.

The band's sound incorporates all the dirge, grit and squall you might crave from a line-up of that caliber, with a healthy dose of gloriously noisy 80s industrial influence thrown in for good measure.

Their lyrical themes take aim at everything from societal greed, environmental crisis to the world's ability to ignore spiralling homelessness. Imagine Big Black scrubbed some of the grime from beneath their fingernails, added some polish to their production and became socially-minded citizens, and you're just about there.

Here, singer/guitarist Chris Spencer and keyboardist Jim Coleman talk us through their debut, self-titled album one track at a time.

Jim: Though November wasn’t the first song that we took to completion, I think it was the song where we really initially got a solid look at what this band was. The song came out of our second recording session with Alan Camlet at Hoboken Recorders. Whereas in the first session, we went in pretty blind – we had to work a lot with the recordings after the session to really craft the material into distilled, coherent songs. But November kind of led the charge in terms of writing music in a self-assured way specifically for this band and the strengths of all members.

Chris: Yeah, the song November was when we could really tell that things were coming together. We were getting comfortable with playing together and beginning to see where things could go. For me personally, it was a point when I began to understand what I wanted to say and how to stylistically approach the material with the vocals. With November in particular, it was lyrically a singular view of a giant overall picture, like standing on a bridge over the East River watching the traffic and looking at unsustainable population growth.

Jim: E605 came about totally unplanned. We had basically wrapped up a few days in the recording studio but had a little time left on the clock. I had to step out to take a phone call, and when I came back in, the foundations were already there for E605. The whole thing kind of grew out of the bass line from Chris Pravdica.

Chris: E605 came together completely organically. Chris P started with a bass thing while Jim was on the phone, Phil started following along and I followed what they were doing. We had fun with that for a while, wrote a few breaks, and had something pretty substantial to play when Jim got back. Lyrically, it refers to a massive system that collects data and information on the user, using that to manipulate them, while pacifying them with a sense of singularity, convenience and ego gratification.

Jim: Protester came out of our first recording session with Martin Bisi. I like the fucked up drunken carnival feel of this. It could really easily be a more normal song but it’s all off kilter, out of alignment, on the verge of falling apart.

Chris: I really liked Phil’s approach to the rhythm. To me, more of a straight ahead kind of song. Lyrically, I was thinking about the many different fucked up aspects of what happened in the protests in Charlottesville, Va.

Jim: As this song was taking form, it was clear that it was stretching us out in ways, acting against any possibility for us to get locked in any set ways in terms of songwriting. Which is great – as we get to know more and more about who we are as a band, it’s an increasingly fun challenge to keep pushing and redefining.

Chris: Yeah, as Jim said, Portrait was a bit different from other songs we had written to this point. More of a use of dynamics. Lyrically it refers to an insatiable greed that seems pretty prevalent in todays society, although written from personal experience. Sometimes it's really surprising what people will do.

Jim: Respirator came out of our third recording session I think. The song really grew from the piano and bass lines that you hear at the beginning. I love how our songs grow organically – just starting with an idea or a couple of sounds, kicking it back and forth a bit, and then you end up with a fully realised track. When I heard the initial pass at vocals from Chris I was really captivated – all of a sudden this thing was alive in a different way.

Chris: Once we were at the point of recording Respirator, we were really locked in. We had become super comfortable in the studio and things were coming together really easily. I had been in Hong Kong not long before we wrote this one and had been pretty horrified by the smog that just about blocked out the sun.

Jim: Super simple, super effective. I feel like this song is trimmed down to essentials. Which is so much of the creative process (editing). This one feels like some old muscle car that is actually dependable.

Chris: On Cause I get to have some fun. I had written a few different guitar parts for this one and had bounced them off Jim. His comments were consistently something to the effect of “MORE NOISE”, so I really felt free to do whatever I wanted to with the guitars. Lyrically, this one kinda refers to the homeless street scene near my girlfriend’s apartment.

Jim: This was an early one, also recorded as part of our initial session at Martin’s. It’s got the noir/spy thing, which creeps into other songs on the record from time to time as well. Love the interplay of guitar and synth. And I of course like the breakdown, where we just dissolve into another world for a little bit.

Chris: Consequences was when Jim and I were really beginning to discover how fun and cool it sounded to mesh the guitar and synth stuff. It really opened a whole new door. I really enjoy the microtonal dissonance that’s going on here. It seems pretty self-explanatory lyrically.

Jim: Phil wasn’t wearing pants on this one. I know listening to albums as a whole is somewhat of a lost pleasure. But we really see this album as a journey, not just a collection of individual songs. And we felt the second half of it just needed a breath here.

Chris: Just one of many reasons I like being in a band with Jim.

Jim: We just wanted to make a short fast punctuation of a song.

Chris: Direct, manic and to the point. I remember being pretty shocked when I heard Phil and Chris working on it when we did the basics. I feel lucky to be in a band with those guys as the rhythm section.

Jim: We felt like this one was the perfect closer to the album, and we have been closing our live sets with it. It’s heavy, it sways hard. It’s got some dark hope in the face of devastation. Which is kind of a universal in our music. The music itself is hopeful – it’s a voice in the face of the global and local challenges we are facing on an environmental, social, political, psychological and emotional level.

Chris: A fun one to play. Especially live.

Human Impact's new single, Contact, is available now. All proceeds from the single will go directly to the NYC Covid-19 Relief Fund. Check out Metal Hammer's premiere of the video now.