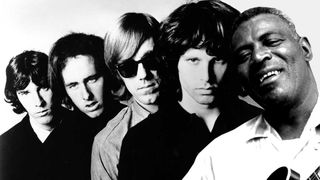 Let’s get one thing clear right up front: no one ever cut Howlin’ Wolf. The best anybody else could ever hope to achieve would be to draw somewhere close to even, and even that didn’t happen very often. Koko Taylor, the Queen Of The Blues, just about managed it with Wang Dang Doodle, as did Jimi Hendrix with Killing Floor, The Rolling Stones with Little Red Rooster, and, on the version of Wolf’s Back Door Man included on their eponymous 1967 debut album, dark princes of acid rock The Doors.

Da Mighty Woof had cut the song at a June 1960 session, along with two other Willie Dixon compositions, Spoonful and Wang Dang Doodle (not bad for a few hours’ work!), and it emerged the following year as the latter’s B-side. In 1965, John Hammond Jr borrowed the song for his So Many Roads album, which is where Doors guitarist Robbie Krieger found it. He brought the song to a Doors rehearsal, and the rest is history.

The huge-voiced, man-mountainous Howlin’ Wolf – aka Chester Burnett (1910– 1976) – had literally earned his trade at the feet of Charley Patton, the primal Delta bluesman, and been taught harmonica basics by no less a personage than Rice Miller (better known as the second Sonny Boy Williamson) before settling in West Memphis, Arkansas, after World War II.

Discovered by Ike Turner in 1951 and brought to Sam Phillips’ newly opened Memphis studio, his earliest tracks (cut before Phillips had founded his own label, Sun Records, otherwise he would’ve been able to release them himself) were licensed to both Chicago’s Chess label and the LA-based Modern Records.

A tussle for his services commenced between these two cut-throat rivals: Chess won and by 1953 Wolf had relocated to Chicago, where he speedily established himself alongside Muddy Waters as one of the most powerful performers on the South Side, though not the best-selling; that honour went to Jimmy Reed, whom Chess had rejected and who subsequently sold shed-loads of the records for upstart rival Vee Jay.

By 1960, when Back Door Man was cut, Team Wolf included the prodigious young guitarist Hubert Sumlin and, in the studio, the equally man-mountainous Willie Dixon as arranger, bassist and songwriter.

The stellar backup crew also featured veteran Chess sidemen like pianist Otis Spann, drummer Fred Below and guitarist Freddy Robinson, and they created a loosely swaggering, easy-rolling variant on one of the stock South Side riffs whilst Wolf rasped out Dixon’s ode to the joys of being the Other Guy and getting better lovin’ – and even better food – than the notional Man Of The House.

With its unforgettable punch-line – ‘the men don’t know but the little girls understand’ (which, incidentally, is the single best explanation of boy bands and teenybopper pop ever encapsulated in a single aphorism) – Dixon and Wolf had created both a defining variant on a classic blues theme, and a song destined for more than to just languish on an obscure B-side.

Back Door Man’s apotheosis came seven years later as The Doors – a hot, dark and dangerous LA club band – were preparing their debut album. By their cover versions ye shall know them: Back Door Man was one of two non-originals on the album, the other being Bertolt Brecht and Kurt Weill’s Alabama Song (aka Whisky Bar, from The Threepenny Opera).

In performance, the band would often medley those two songs together, telegraphing their intention to fuse Brecht/Weill and Dixon/Wolf into a single entity. Left to themselves, the three instrumental Doors – keyboard guy Ray Manzarek, guitarist Robbie Krieger and drummer John Densmore – would probably have been a tidy little jazz trio.

Left to himself, southern-born film student and would-be poet Jim Morrison would, equally probably, have never been a singer at all. Together they became one of the most intriguing, innovative and transgressive American rock bands of the era and – particularly after their second single, Krieger composition Light My Fire, blazed to the top of the charts, taking their album with it – the only one to approach the commercial and cultural status of a home-grown Rolling Stones.

His three colleagues were gentle, meditation-class organic potheads, but part of the eternal Morrison paradox was the perpetual tension between two sides of his being: the sensitive, literate poet and the mean-drunk redneck asshole. This worshipper of Muddy Waters, John Lee Hooker, Otis Redding and Bo Diddley spent the night of Martin Luther King’s assassination getting spectacularly trashed in a Hollywood strip club before dodging in and out of traffic, bellowing the n-word at passing black folks.

John Hammond’s cover provided the bridge between Wolf’s original and The Doors’ version, just as The Small Faces’ You Need Loving bridged Muddy Waters’ You Need Love and Led Zeppelin’s Whole Lotta Love. Like Hammond, The Doors imposed a 12-bar structure onto Wolf’s one-chord original, but they also slowed Hammond’s tempo and heavied it up into a menacing funk-blues sex-beat stomp.

They credited the song jointly to Dixon and Wolf, sliced out two of the four original verses and spiked it with a snarky guitar solo from Krieger; Morrison made his vocal entry not with a sung line but with a couple of decidedly groinacious grunts’n’hollers which suggested that, in the free-loving newly sexualised 60s, the subtext of the song’s title was rapidly becoming the text.

Ray Manzarek: “Jim loved the blues – as we all did – and would have been happy to be a bar singer in a New Orleans crawfish, oyster and gumbo blues bar back in the mid-50s.” Morrison himself found not just inspiration in the blues, but freedom: “I don’t listen to [rock] much. I like singing blues – those free long blues trips where there’s no specific beginning or end. It just gets into a groove and I can just keep making up things… Just starting on a blues trip and seeing where it takes us.”

Since the earliest club days, The Doors had always jammed live on blues tunes (like Bo Diddley’s Who Do You Love, Muddy Waters’ version of Rock Me and John Lee Hooker’s idiosyncratic take on Money) and they continued to do so through their brief and tempestuous roller-coaster career, which ended with an almost complete ban on live performances and mainstream TV, thanks to both their vehement anti-war politics and the live chaos engendered by Morrison’s alcoholic confrontationalism and his penchant for the kind of theatrical transgression which so inspired the young Michigan nerd who later transformed himself into Iggy Pop.

A mere four years separated their first album from their sixth and last, LA Woman, on which they cut their second studio blues cover: a magisterial reading of John Lee Hooker’s Crawling King Snake which would have seemed tailor-made for Morrison’s Lizard King persona if the growing girth brought on by his relentless drinking hadn’t forced him to shed the Lizard King’s leather carapace in favour of roomier and more comfortable jeans and workshirts.

His Byronic beauty buried beneath beer-bloat, blear and beard and his once proudly-displayed six-pack submerged in suet, Morrison adopted a new persona, that of bluesman Mr Mojo Rising, a fortuitous anagram of his name. The original doors’ last two studio albums, Morrison Hotel and LA Woman, saw him attempting to retool the group as an existentialist bar-band playing post-psychedelic blues.

How this directional change might have panned out – if Morrison hadn’t then taken off to Paris on an extended sabbatical swiftly cut short by a fatal heroin overdose – is anybody’s guess. The Doors would’ve been one king-hell blues band if that had been all they were prepared to settle for.

But it’s the likes of that early Back Door Man and the later Crawling King Snake – not to mention blues-based originals like Roadhouse Blues (later adopted by Status Quo, who gleefully stomped most of the nuances out of it) and The WASP/Texas Radio And The Big Beat – which delineate one of the possible futures The Doors could’ve explored, if they’d actually had a future.

So who wins? As in all comparisons between great blues originals and great blues-rock adaptations, each one does, on its own turf. Wolf’s original is a masterpiece, and it says much for the stratospherically high standard of his studio work that label boss Leonard Chess and writer/producer Willie Dixon could’ve cheerfully relegated a track this cool to the status of a mere B-side.

The Doors’ cut is also a masterpiece, of 60s blues-rock – not exactly a canon short of masterpieces, from the decade where the form originally established itself in the wake of the band to whom The Doors always had their truest kinship, The Rolling Stones. It’s grungy, funky dirty-white-boy blues sung by a young Southern intellectual revelling in having someone else’s dick stuffed down his pants. And you can dance to it.