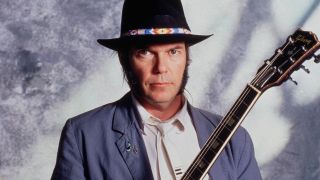 For all the frequent brilliance of Neil Young’s albums, cherry-picking from them throws up its own set of problems. Distinctive, quixotic and, at times, downright infuriating, such is his uncompromising nature that even his own record company once threatened to sue him for deliberately making “unrepresentative” music.

A truly restless artist, there are various kinds of Neil Youngs: lone wolf, supergroup icon, Canyon hippie, garage rocker, country boy, grunge forefather... Will the real one ever stand up? Whether or not the definitive Neil Young really exists, one thing is certain: during a career spanning almost 60 years, he’s never been averse to taking the odd risk.

Born in Toronto in 1945, Neil Percival Young played in various Winnipeg garage bands in his youth, before striking out for LA in the mid-60s.

The financial freedom gave his solo work limitless possibilities. By the early 70s he was the golden child of the Topanga Canyon set, the moody troubadour with the shaky voice and the bitter-sweet melodies.

But as his record company began plotting out a lucrative career as sensitive singer- songwriter, Young was already headed for the ditch. His bleak post-Harvest albums and a renewed acquaintance with old buddies Crazy Horse, marked by howling guitars and distorted feedback, proved he was a force that was impossible to tame.

The 80s found Young in his own peculiar wilderness, producing a series of increasingly ‘difficult’ albums that tested the patience of diehard fans and confounded his record label, Geffen. In retrospect some of the bizarre experiments with electro-pop (Trans) could be forgiven once Young explained it was his way of communicating with his son, stricken with cerebral palsy. But it wasn’t until the early 90s, when he returned to the polarities of his best work (acoustic and raw electric) that he finally sealed the iconic status he enjoys today.

Young is as prolific now as he’s been at any time in his career. And as he gears up to take to the stage in Hyde Park with Bob Dylan this summer, what better time to assess the legend?

Young’s first solo album after hooking up with CS&N placed him somewhere between wistful acoustic balladeer and eco-mystic. Inspired by actor Dean Stockwell’s green-themed film script of the same name, After The Gold Rush was evocative and achingly beautiful.

It was largely set to spare piano and strummed guitar, with Young’s disquieting lyrics echoing the uncertainties of a new decade. Don’t Let It Bring You Down and Only Love Can Break Your Heart were striking enough; Southern Man, an uncompromising, vitriolic put-down of extremism and prejudice everywhere, provoked a rebuke from Lynyrd Skynyrd with Sweet Home Alabama.View Deal

Young’s biggest seller and the record that set him up as the new poster boy for the post-60s hippie crowd. Accessible and dreamy on the surface, Harvest was dark and claustrophobic underneath.

With backing from Nashville vets The Stray Gators, Old Man was near perfect, while Heart Of Gold gave Young his sole US No.1 But it was the unorthodox stuff that marked him down as least likely to cosy up to James Taylor (who, ironically enough, guests here). The Needle And The Damage Done lamented the heroin use of Crazy Horse’s Danny Whitten, among others, while the Jack Nitzsche-arranged There’s A World and A Man Needs A Maid were overblown orch-pop works of rare ambition.View Deal

“Probably the most depressing album I’ve made,” was Young’s assessment of the follow-up to the consumer-friendly Harvest. Certainly it polarised opinion enough for the NME to print two separate reviews, with Ian MacDonald defending it from charges of self-pity brought by fellow hack Steve Clarke.

With hindsight, it’s up there with anything Neil Young has ever made, a kiss-off to the blind idealism of the 60s counter-culture at a time when Nixon still held sway. Bleak, scornful yet not without humour, it’s a bony collection of electric songs that vents spleen on Tricky Dicky (the stunning Ambulance Blues), corporate greed (Vampire Blues) and the hippie dream itself (Revolution Blues).View Deal

Recorded before On The Beach but deemed too gloomy for an audience of fans eagerly awaiting the sequel to Harvest, the label sat on Tonight’s The Night for two years before they finally released it.

Informed by the deaths of Danny Whitten and roadie Bruce Berry – and unveiled in all its booze-sodden glory before bemused crowds later that year – it’s an unnerving record with the stoned air of a private wake. Emotionally racked and set to the sparest of piano arrangements, Young is at his most candid on the stumbling title track and the pained Roll Another Number.

It sold poorly but remains a cornerstone of the Young legend.View Deal

Half acoustic, half electric (and part live, part studio), Rust Never Sleeps married the two dominant strands of Young’s career thus far: melodic troubadour and electric warrior. Nothing summed up its schizophrenic brilliance more than My My, Hey Hey, a paean to Johnny Rotten and Elvis Presley both acoustic and in barn-burning glory at opposite ends of the album.

Pastoral delights include the exquisite Pocahontas and Thrasher, Young’s two-fingered salute to old cohorts CS&N. Cranking the amps high, Young and Crazy Horse have rarely rocked harder than on the proto-grunge of Powderfinger – a song first offered, believe it or not, to Lynyrd Skynyrd.View Deal

The previous year’s Freedom may have rescued his spectacular 80s nosedive, but Young’s real return to form was Ragged Glory.

Back with Crazy Horse, and now fêted by Sonic Youth, Dinosaur Jr and a whole new generation of white-noise terrorists, he threw himself into a pot of boiling riffs, churning solos and disorienting 10-minute jams.

But there was sharp lyrical insight and artful country rock too. Country Home and White Line were unrecorded live pleasers from the 70s, while obscure 60s nugget Farmer John revisited Young’s pre-Buffalo Springfield days with The Squires, who used to cover it. Most anthemic of all was F*!#in’ Up!, a scathing attack on self-destructiveness.View Deal

Everybody Knows This Is Nowhere (Reprise/WEA, 1969)

Four months after his sensitive, self-titled debut, Young re-emerged with a raw backing band introduced to him by old flame Robin Lane. Young and Crazy Horse had played together for just three weeks, but it was the start of a lifelong alliance.

Sure, there were still diversions into folksy pop and chugging country, but this album is known best for three fuzzed-up guitar blasts. With its tempo shifts and crunching riff, Cinnamon Girl became an instant classic, while Down By The River and Cowgirl In The Sand were epic, improvised forays into the kind of emotive, unfettered rock that has become a benchmark of Young’s electric sound ever since.View Deal

His career relit by Freedom (1989) and Ragged Glory, Young was more prolific than ever in the early 90s. Having had his My My, Hey Hey lyric (‘It’s better to burn out than to fade away’) quoted in Kurt Cobain’s suicide note, Young paid tribute by naming this album after his grunge progeny.

A dark, enigmatic set of songs, the mood is largely melancholic except for the brusque swipe at consumerism that was Piece Of Crap. With Young backed by Crazy Horse, the 15-minute Change Your Mind went in dogged pursuit of fuzz-guitar heaven, but much of this rather fragile record (Trans Am, My Heart) felt like last orders at the bar.View Deal

If both the elegiac Prairie Wind and the Bush-bothering Living With War were marked by a rare sentimentality, here was a return to the sly brilliance of Young’s mid-70s work. Which was hardly surprising, given that the title, and a handful of songs, were rescued from the original Chrome Dreams project aborted (or lost in a fire, depending on who you believe) in 1977.

A dazzling sweep of all his classic traits, from tender laments and rough-edged acoustic balladry to monumental guitar distortions lasting 18 minutes, and with great horns, this is Young at his raw best. Subsequent live dates confirmed he’d fully reconnected with his primal instincts.View Deal