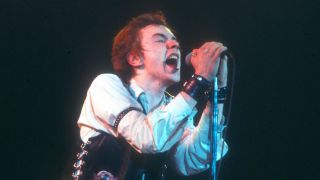 “I always said when I was little that my two favourite bands were Sex Pistols and Parliament. People might say they’re completely different, but they both had that ‘fuck you, we’re gonna do what we want’ kind of attitude.

“There was an amazing amount of honesty I found in the Sex Pistols. There was a radio station I used to listen to and at midnight they’d play all the good stuff that I didn’t know was called punk rock at the time. I liked the music before I even knew what it was, and I thought Johnny Rotten was an amazingly witty and intelligent person. He led so many close-minded people in for the slaughter thinking they could have a shot at him, but they had no idea what was going on. It was absolutely brilliant. Obviously it was more of an English thing than over here, but I was really appreciative of the way he went about it.”

“I think of lot of punk rockers just went for shock value, but it wasn’t shock with Johnny, it was awe. There was substance there. If it wasn’t for John Lydon, the Sex Pistols wouldn’t have the legacy that they do. They wouldn’t have had the influence they did. It took somebody to be incredibly brilliant on so many levels, and to come off as brilliant. He was on a lot of different levels with the way that he did things. He knew what people wanted – the presentation they wanted, the result they wanted, and he wasn’t going to let them get it. And that sums up punk rock to me. He wasn’t a circus act, he was the spokesperson that was needed.

“He used to live in Venice and every time that I’ve been semi-close I kept my distance. He probably wouldn’t like it because people used to spray paint Suicidal on his house! I think it would be a situation where I tell him he’s brilliant and he’ll say something that I absolutely don’t deserve. I could tell him all the reasons why I admire him but I don’t really think he gives a damn, and that’s why I like him.”