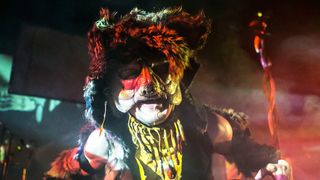 Whether you’re familiar with Skinny Puppy or not, music wouldn’t be the same without them. The Vancouver industrialists have been knocking about since 1982, drum machines and samples pinning them, for simplicity’s sake, as a bastard Kraftwerk, a depressed Depeche Mode or Throbbing Gristle on leg day. They’ve influenced musicians across almost every contemporary genre – well, maybe not reggae – and had their ideas nurtured and nicked by some of metal’s finest.

Ministry and Nine Inch Nails used the 90s as their trampoline into the mainstream, but they wouldn’t have bounced once without Puppy. Al Jourgensen’s Ministry was laughable in ’84, whereas Puppy gave us Remission: an EP bursting with potential, exuding a dance-ready racket heavier than anything their contemporaries offered. Ministry beefed up on 1986’s Twitch and that still sounds limp compared to Skinny Puppy’s Nivek Ogre repeatedly screaming “DEATH!” on Assimilate a year prior; it took Ministry until 1989 to rival them with The Mind Is A Terrible Thing To Taste, and that’s only because Jourgensen half-joined Skinny Puppy to record Rabies at the same time, thus making both albums’ thrashing brilliance comparable.

Even Trent Reznor admits to ripping off Dig it for Nine Inch Nails’ first ever song, Down In It. Aside from basically inventing Nine Inch Nails – and just think how many bands wouldn’t exist without them – Skinny Puppy aimed their lyrical scope at everyone and fired until heads exploded. It’s protest music; “Fuck you I won’t do what you tell me” before that phrase became a bumper sticker. AIDS, war, suicide and fascism are just a few topics terrorised by Puppy, done so in the most confrontational of fashions that still continues to this day, the band invoicing Guantanamo fucking Bay in 2014 for unlawful use of their music. A digital Dead Kennedys, if you will. Meanwhile VIVIsectVI, Puppy’s 1987 LP, tears apart the seemingly mandatory implementation of animal testing; Testure’s music video features a bloke being experimented on while VIVIsectVI’s tour had the band dissecting a stuffed dog called Chud. As you do.

And that brings us to the live show. Skinny Puppy’s studio innovation was just the shore-lined poison to their creative iceberg. On stage, Vancouver’s most villainous remain without peer; Alice Cooper and Screamin’ Jay Hawkins may be cited as the creators of rock‘n’roll’s stage show, but Puppy’s late 80s/early 90s gigs make Coop’s Cold Ethyl look like The Muppets. Skinny Puppy’s wired-up jungle nightmare is year zero for modern metal theatrics – Ogre’s stilt-walking on 1990’s Too Dark Park tour was aped by Marilyn Manson five years later. The industrial scenery, the flickering screens, the angle grinder, the fake blood and facial grotesqueries – it’s GWAR, it’s Rammstein, it’s Ministry, it’s Cradle Of Filth. Skinny Puppy tightrope-walked over the absurd and the horrifying, the arty and the obscene, bands of each persuasion indebted to them.

If Skinny Puppy’s only goal was to just get high and write glitchy, sample-laden nonsense – or brap, as they liked to call it – then fine. They did that. But people paid attention. Following keyboardist Dwayne Goettel’s death in 1995, the band called time until a one-off show in 2000 and, finally, an album in the form of The Greater Wrong Of The Right four years later. Not only was that record a sublime stylistic progression, but its eighth track, Use Less, features Static-X’s Wayne Static and Danny Carey from Tool – and if Tool’s drummer is up for it, you’re probably doing something right. Even Deftones remixed Spasmolytic, for Lemmy’s sake.

As Skinny Puppy’s cEvin Key recovers from recent facial reconstruction surgeries (doctors removed cancer cells from his face while listening to Assimilate and Tormentor – metal as FUCK) we can only hope he returns stronger and more cynical alongside Ogre. Because 2016 is a terrifying place to live. We have Architects, letlive., Enter Shikari, King 810, Thy Art Is Murder and countless other young bands tackling issues head on, but nobody does it like Skinny Puppy.