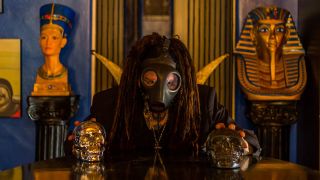 Industrial metal is back. While it waned in popularity, it is making a huge comeback this year. So far in 2016 there have been new releases by Surgical Meth Machine, a new project by Al Jourgensen of Ministry; Die Krupps just released Live – Im Schatten Der Ringe, while Filter returned to its industrial roots with the powerful Crazy Eyes. Rob Zombie’s latest The Electric Warlock Acid Witch Satanic Orgy Celebration Dispenser is a return to form and Combichrist just released This Is Where Death Begins. Fear Factory released one of their best albums last year (Genexus) and just wrapped a successful tour performing their landmark record Demanufacture in its entirety, and are currently considering a similar tour of Obsolete. In 2015 Rammstein frontman Til Lindemann released an album with Peter Tägtgren of Hypocrisy (called Lindemann) and in an interview that summer, Tägtgren indicated that Lindemann was soon to be returning to the studio with Rammstein, with an eye on a 2017 release. That’s after they finish a 23-date world tour. Nine Inch Nails are expected to release a new album this year, and members of The Revolting Cocks (Richard 23, Luc Van Acker, Chris Connelly and Paul Barker) will tour as The Cocks on a short run of dates in the US this autumn.

Industrial is many things to many people, but the splintering of genre into myriad categories baffles and aggravates listeners and musicians. What is it, and who qualifies as industrial? The term ‘industrial metal’ is polarising, and the basic characteristics of the genre, blending electronics with aggressive metallic guitar and drums, is an abomination to heavy metal purists. Thirty years ago, most metalheads would scoff at the notion of seeing a band like Ministry, but now they are right at home at the Brutal Assault festival.

Followers of industrial pioneers Throbbing Gristle, Laibach and Einstürzende Neubauten may feel the same way about having metal intrude on their experimental darkness. Bands from both genres might seem incongruous, yet beneath the umbrella of industrial the relationship makes perfect sense.

‘90s nostalgia could be driving interest as late Gen Xers hit their 30s, though what is more likely is the outrage that fuels the music. The US is in an election year and Donald Trump is fanning the flames of xenophobia. As conflict continues unabated in the Middle East and refugees from Syria pour into Europe, many countries that had put such sordidness behind them are seeing racism and xenophobia thrive there as well. Whether there is a direct correlation is incumbent upon individuals to decide: but what is definite is that angry music thrives during social unrest, and people are divided and angry. Industrial metal is a powerful, wonderful stimulant and release.

Burton C. Bell of Fear Factory puts it succinctly: “There’s angst in industrial and there’s driven angst in metal that makes it seem like they’re a perfect fit together because they’re both anti-establishment. They’re both genres that break rules, sonically and conceptually.” Filter’s Richard Patrick agrees, “Industrial music’s whole vibe is just anarchy and speaking the truth. It’s not Kraftwerk, it’s not Depeche Mode. It’s not polished and pristine: it’s aggressive and angry.”

Tristan agrees with Bell. “There’s an anti-fascist element to it and I think in trying to achieve that a lot of acts will use fascist imagery. Throbbing Gristle have done that, Rammstein does that. It’s a perfect time right now, when we have a fascist presidential candidate, for industrial to make its return. The political element to it is important.”

For Combichrist frontman Andy LaPlegua, it’s about freedom. “I feel like music shouldn’t have any rules. If you want to do a David Bowie kind of song and then go into an epic metal anthem you should be able to do that. That’s one of the things I like about industrial or whatever you want to call it: I can do whatever I want. I can bring in a damn saxophone if I feel like it. Why should I follow other people’s rules about what I want to do?”

Alexis Mincolla, vocalist of Los Angeles industrial act 3Teeth, who opened for Tool this year, believes industrial is an abstract. “To me, the amorphous term of ‘industrial’ is more of a state of mind than it is a sonic palette that makes up the genre. I always liked the way it focused its intentions on sucking the poison out of a mass-production society and sardonically spitting it back in its own face. That was the primary element of industrial that I personally identified with; well that and the fact that it always came across as more experimental to me. It felt like it was a space that you could get away with trying weirder shit because it didn’t have such a definitive DNA to its sound unlike other more traditional genres of music.”

It took time before industrial gained acceptance. “For a long time we were the red-headed step-child of industrial and metal, but our roots were legit,” says Bell. Fear Factory helped popularise the hybrid with Demanufacture and the resulting rework Remanufacture, which featured remixes by Junkie XL and Rhys Fulber of Frontline Assembly. “We were listening to Ministry, KMFDM, Nine Inch Nails, Einstürzende Neubauten, and classic sounds that informed our sound and inspired us to create something different from studio albums to remixes. Electronics are a tool and for someone that practices their art, a tool is necessary. Sometimes you need it, sometimes you don’t.”

Ministry firebrand Al Jourgensen was at the forefront of the movement, but the so-called Godfather Of Industrial doesn’t care for the label at all. “I never liked being called industrial in the first place. When I think of industrial I think of early Neubauten or before that with Karlheinz Stockhausen. I’m doing music because it pleases me and I’ve never really been comfortable with that mantle. I take it with a grain of salt and I just do what I do.”

LaPlegua is equally confounded. “I wouldn’t know where to put us. Aggrotech was a term I used to describe an album that I said was aggressive techno, but it hasn’t really applied to anything I’ve done for the last ten years. For what we do I guess industrial rock would be a good term for it. I’m happy with the term as long as people understand we’re a band and we do whatever we feel like playing.” This is interesting to note as Combichrist was recently announced as part of the inaugural Knozzfest.

“Nitzer Ebb was considered an industrial band,” Jourgensen points out. “Most of the bands we signed to Wax Trax! Records were called industrial bands by the media. Now industrial has branched out into industrial metal and this EDM shit is all the rage… that’s stuff that we were doing twenty-five, thirty years ago. Stuff I’m hearing now at dance clubs is exactly like stuff from thirty years ago: it really is no different. The broad-based term of industrial has shifted into sub-sects and there’s no putting your finger on it.”

Richard Patrick started out as a tour guitarist for the then-unknown Nine Inch Nails during the Pretty Hate Machine tour and the tour for the Broken EP. “Industrial music was brought to my attention by Skinny Puppy and Ministry… and not too long after that I met Trent [Reznor]. He had seen my band and asked me if I wanted to tour with him. One time we saw Revolting Cocks at The Fantasy Nightclub. Trent looked at Al and he said to me, ‘You see that guy right there?’ And I said, ‘Who’s that? Is that Al Jourgensen?’ Trent said, ‘Yeah. That guy’s my fucking idol!’

“By the time I quit NIN I looked like someone who was jumping on the bandwagon, but I have always known in my heart that it came from the right place,” says Patrick. “Al left a massive impression on me. I know our music doesn’t sound similar because I take more of a singer-songwriter approach to stuff, but he’s always been the guy that pushed the envelope musically and tried to get every ounce of life out of life. He’s someone I regard as a massive hero. I get nervous around him when I see him: it’s like being in the presence of John Lennon to me.”

Al Jourgensen’s latest project, Surgical Meth Machine is a riveting work that moves from hyper speed thrash to mournful crooning. The singer explains, “There’s all sorts of genres that I’ve touched on over thirty years and with the SMM record I decided to give all those subsets of genres a fine tuning.

“When we first started, before anyone was calling us industrial, we were using organic samples. If you wanted a train rumbling across a song, we’d have to actually go out to the train tracks with portable Sony Nagras and sit there and wait for a train and record it as it went by. My kick-drum was me thumping the car door of my 1977 Avanti with my thumb! Nowadays you can press any number of programs that will send you up a million options of all the sounds in history without having to work for it. So if I sound like a cranky old man sitting in his yard drinking a beer yelling, ‘These damn kids today have it so easy, goddamn it!’ – well, basically, that’s exactly what’s happening!” Jourgensen laughs.

Thankfully, some kids today like Tristan Shone are pushing the envelope like Jourgensen did. The force behind Author and Punisher explains his music. “I would characterise what I do as experimental industrial doom. Every album I do is a little bit different. My influences are Godflesh, Neurosis, the Melvins, some death metal, drum ‘n’ bass and dub stuff. I always listened to Ministry as far as industrial, but I really was not into fashion industrial and I think that’s what a lot of people got turned off by, when it became a Hot Topic party. It didn’t have anything gritty: it was just house beats with a bunch of metal to it. Industrial drums are not soothing: they’re aggressive. I’m trying to make music that does not involve a lot of pre-sequenced material. Organic, live industrial: that’s what I’m trying to do.”

This music continues to evolve and thrive and is currently enjoying a welcome, spirited renaissance; but as far as classifying it, Jourgensen has a suggestion that he offers point blank: “There’s good and there’s bad music, and those are the only two genres you need to know!”