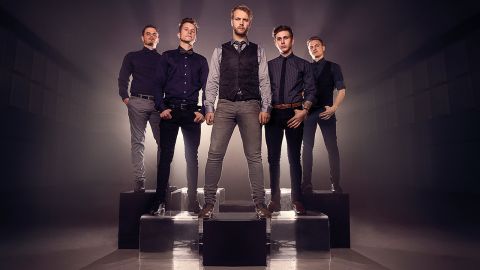 Striking the balance between accessibility and technicality is a feat many metal bands fall foul of, especially when trying to condense the kind of epic, progressive adventures Norway’s Leprous have carefully constructed over four albums into a more accessible form. Malina, their fifth, after the intricately constructed and gradually revealing wonders of 2015’s The Congregation, threatens disappointment. Stuck and From The Flame are built around huge, punchy hooks, but never quite reach for the bold horizons of old. Yet you should never underestimate a band who also moonlight as black metal visionary Ihsahn’s touring ensemble. What rapidly becomes apparent is that this is but a soft introduction into Leprous’s histrionic world. Einar Solberg’s operatic falsetto is initially off-putting in its similarity to Muse’s Matt Bellamy, but nowhere near as smugly convinced of its own grandeur. It ultimately proves the perfect counterpoint to the staccato stab of the angularly abstract riffs that anchor such extreme melodies.

This tug of war provides the record’s main tension – a battle that increases in compelling complexity without ever losing focus the deeper you venture in. It barrages on the snare-blasted rattle of Captive and proves engrossing on the predatory canter of Illuminate before reaching a thrilling apex on Mirage. Its knock-down, drag-out dirge of a riff flourishes amidst the pulsating, sci-fi synth into emotive urgency, and culminates in an exhilarating instrumental dash to the finish – a sinewy tangle of bass and keening leads that will leave you gasping. By rights Malina should make Leprous huge.