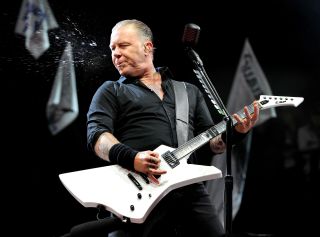 “Getting a chance to play Glastonbury and representing the first harder rock band is obviously a huge honour. And we are aware that there may be a few people in a few of the tents who’ll sit there and go, ‘What the fuck is Metallica doing at our festival?’.”

Metallica’s drummer and driving force was speaking to The Guardian as his band, the biggest in metal, were preparing to make history by headlining Glastonbury for the first time. The fact is that Metallica getting the big Saturday night slot on the Pyramid Stage wasn’t just a novelty – it was a complete anomaly.

Here was a band who had written Battery being given the kind of spot usually reserved, in recent years at least, for pop-friendly singer-songwriters (Ed Sheeran, Adele), rock  ‘n’ roll megaweights (The Rolling Stones, U2) or reliably safe and largely inoffensive stadium-fillers (Foo Fighters, Coldplay, Kasabian).

The fact that Metallica’s booking surprised so many lent credence to a criticism that has been levelled at Glastonbury by metalheads for decades: despite priding itself as a festival for all-comers, it just doesn’t give a shit about heavy music.

Or didn’t. Since that Metallica set – which, in fairness, felt more like a fun bucket-lister for Lars et al than a door being broken down at the time – Glastonbury has slowly but surely opened its gates to heavier bands. This isn’t an entirely new thing – the likes of Deftones, Nine Inch Nails, Rage Against The Machine and a pre-Dave-Grohl-is-everyone’s-best-mate Foos popped up on Glasto lineups across the 90s.

Still, 21st century metal fans have had little to get excited about when it comes to Worthy Farm. Following Metallica’s performance, however, there were small signs that Michael and Emily Eavis were starting to look towards heavier climes on a regular basis.

Motörhead and Bring Me The Horizon were snuck onto the lineup in 2015 and 2016 respectively – hardly Insect Warfare, but it was impossible not to enjoy seeing Oli Sykes scream ‘CUNT’ at a field half-filled with indie kids waiting for Bastille. Then, in 2017, one madcap idea took it all a step further.

“A few of us travelled down in 2016 to watch our band Blackberry Smoke on the Avalon Stage,” explains Tom Hadfield, Head Of Live Music at legendary metal label, Earache.

“We were exploring all the mad little stages on the way to Avalon and Dig [Earache founder Digby Pearson] mentioned how the anarchic and political vibe reminded him of the early Earache days and going on marches with Napalm Death and Carcass. I distinctly remember him turning round and saying, ‘We should have our own stage at Glastonbury – we belong here.’”

While Earache’s roster has evolved and expanded over the years, the label ultimately remains embedded in metal lore, having helped facilitate the rise of influential artists including Napalm Death, Cathedral, Carcass, Godflesh, Bolt Thrower and others. The likelihood of them being given a whole stage to preside over seemed slim at a festival where Muse would usually be considered one of the heaviest acts of the weekend.

“The preconception and stereotype amongst a lot of non-metalheads is that all metal bands are into war and violence, and there is no place for that at Glastonbury,” says Tom.

“But we wanted to prove this stereotype wrong. It took a bit of persistence, but once we’d got our point across about metal being underrepresented and how we could bring something different to the festival, they were totally onboard with it, very welcoming and open-minded.”

And so, Earache were charged with putting together a bill that represented heavy music in the widest possible terms – not just from their own roster, but from right across the spectrum.

“We had a variety of metal, punk and rock, ranging from punk legends like Dead Kennedys, Crass’ Steve Ignorant, Sex Pistol’s Glen Matlock and Extreme Noise Terror, to some of the most exciting new extreme bands around like Ho99o9, Hacktivist, Wormrot and Heck,” notes Tom.

“Part of the reason for having the stage that year was to celebrate 30 years of Earache, and so Napalm Death were the first name on the team sheet. Their debut record, Scum, was the album that put Earache on the map.”

Hosted in a disused tube carriage dubbed the Earache Express in the heart of Glastonbury’s colourful and expansive Shangri La area, the experiment proved to be a rousing success, with queues of dedicated metalheads, old school punks and curious bystanders a regular fixture over the weekend as people clamoured to see what all the racket was all about.

Wormrot’s Singaporean grind rubbing shoulders with Ho99o9’s chaotic, experimental punk and Hacktivist’s rap-infused tech metal was unlike anything people had ever seen at Glastonbury.

Grindcore godfathers Napalm Death, meanwhile – afforded a special position on the larger, open-air Truth stage – attracted over 7,000 people for what proved to be one of the sets of the weekend.

“We knew there was a big demand for heavy music at Glastonbury, and we were proved right,” beams Tom today. “They had to shut the gates to Shangri La for Napalm Death as the whole field was full to capacity. The Earache Express was ‘one-in-one-out’ the whole weekend, queues stretching off into the distance. It helped our case in getting a bigger venue for 2019.”

That venue, rebranded Scum, will see some of the most exciting heavy bands in British music play Glastonbury for the first time, including death metallers Venom Prison, hardcore firebrands Employed To Serve and Rolo Tomassi and trap-metal innovator Scarlxrd.

“Anyone who has been down to Shangri La will know it's the most political part of Glastonbury, with a huge emphasis on the environment and saving the planet,” he muses. “We wanted to make sure we got Gojira to be a part of it, because they can really help amplify the message while absolutely destroying the crowd.”

For the bands, it all represents a long overdue chance to win over crowds that, for all intents and purposes, would usually sit well outside their comfort zone.

“Glastonbury has never really been a festival we thought an extreme band like us would be asked to do,” says Venom Prison guitarist Ash Gray.

“I think it's great to allow extreme bands to play to a wider audience and, hopefully, open the gates to introduce people to extreme music. It’s positive for the scene and great for sustaining the metal industry.”

“I feel the inclusion of bands like us at Glastonbury gives the genre the recognition and platform it deserves. People have become far too safe with the music they listen to, even to the point of radio DJs having to prepare their audience before playing a track that has a tiny bit of guitar on it. Hopefully, the heavier bands at the festival will spark a fire in people’s music taste.”

The heavy bookings at Glasto this year don’t end there, either. As this year’s set times were revealed, fans quickly noticed that both Bring Me The Horizon and Babymetal had been added to the bill, taking over the Other Stage during the mid-afternoon on the Sunday.

Neither booking is particularly surprising – Bring Me making their second appearance off the back of a mainstream-embracing new album and Babymetal’s genre-splicing antics likely to be a welcome oddity for a festival that prides itself on leftfield attractions.

Still, though, the fact remains: after years in the wilderness, metal is very much on the agenda for Europe’s biggest festival. And, ultimately, that can only be a good thing for our scene. Perhaps Metallica were onto something after all.

Babymetal and Bring Me The Horizon will play on the Other Stage on Sunday, June 30.

Over in Shangri La, Gojira, Venom Prison and Idles will be playing The Truth Stage.