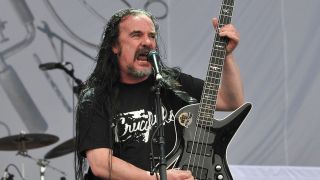 The challenge was simple. We asked Carcass’ Jeff Walker to nominate 10 of the band’s most goriest songs.

After all, they set out their stall early with their 1987 demo, Flesh Ripping Sonic Torment. Their 1988 debut Reek Of Putrefaction and its 1989 follow-up, Symphonies Of Sickness had artwork and medically-themed song titles that would turn the most steely of stomachs. Crepitating Bowel Erosion, anyone?

“I don’t consider our lyrics to be at all gruesome,” protests Walker. “To me, they’re more absurd and funny than nasty. You read the lyrics and they’re comical. We’re all fans of ‘70s horror movies like The Vault Of Horror and The Crypt Of Horror. They were morality tales, but also had a rich vein of gallows humour running through them. And we were also influenced by the Pan Book Of Horror Stories book series – that’s the way I see our songs.

“We’ve never gotten any negativity from those in the medical profession for our lyrics or artwork,” he adds. “I’ve met a lot of nurses, doctors and people from the medical world, and they are always positive about what we do. So all these songs will come from our debut album, which started the whole process off.”

Let’s start with the album’s opening track. A grind ballad, if you will…

GENITAL GRINDER
“Yes, it’s an instrumental, but I love the title. It makes you wonder how such a grinder would work. And where would you have it? In a saw mill? The whole idea is very daft, but does get you thinking. However, you can’t take it seriously.”

FESTERDAY
“When you come from Liverpool, like we do, you can’t escape The Beatles’ influence, because it’s everywhere. This was our piss-take of Yesterday. I had another idea for a song, called Eleanor Rigor Mortis. And we may write lyrics for that one day. The pay off here at the end is suitably ridiculous. How can you be eaten alive? If you were eaten, then you wouldn’t remain alive!”

EXCRETED ALIVE
“The title is self-explanatory. Someone is eaten alive and then shat out – alive! Of course, it’s physically impossible, It just shows just how ignorant we were back in those days. But then, it’s supposed to be funny.”

PSYCHOPATHOLOGIST
“This was one of the first written by songs Ken (Owen, drummer). When I first heard the demo, I thought it was stupid. But then I read the lyrics and realised this was pure comedy. As with all of Ken’s songs, this was written in the first person. The line towards the end – ‘I get high sniffing on all the fumes’ – that’s just so cool. It could even be a drugs reference.”

OXIDISED RAZOR MASTICATOR
“I wrote the lyrics for this one. It’s about someone actually chewing razor blades. Honestly, can you actually imagine anyone doing something so crazy? That’s what I mean about our songs having a real black humour.”

FOETICIDE
“It’s about abortion. Or rather, Ken’s take on abortion. There was some graffiti someone had sprayed on the side of a clinic we had on The Wirral in Merseyside. I think that gave Ken the idea for the lyric.”

SPLATTERED CAVITIES
“This one has a good narrative. ‘Terminal backache paralysing as your spine is shattered’. It sparks the imagination, doesn’t it? I can’t help thinking about a caretaker or a cleaning woman with a mop in their hand, cleaning up the mess left behind, with a cigarette dangling from their mouth!”

FRENZIED DETRUNCATION
“This was originally called Limb From Limb. But at the time we were just getting into reading dictionaries and being all intellectual, so we changed the title to sound as if we were clever. But the opening line is… ‘Limb from limb’. And that says it all.”

MICROWAVED UTEROGESTATION
“No, not a song about attacking a pregnant woman. Nor about murder. This one deals with what happens to human flesh when you microwave it! A bit messy, don’t you think?”

MAGGOT COLONY
“I love the title. And I do recall that one time in America we had a support band called Maggot Colony. Yes, they’d take their name from this song. The amazing thing was that their drummer was completely blind. He had to be led to his kit, and led back offstage. But once the gig started he was amazing.”

Jeff Walker was talking to Malcolm Dome. The band are on tour this month. For full details, visit their official Facebook page.