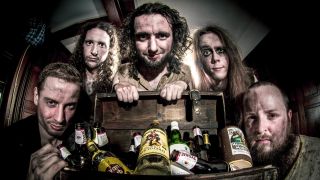 Back in 2008, a band called Alestorm, dubbing themselves "pirate metal" broke into the UK metal scene with their debut album Captain Morgan's Revenge. The band began as a standard power metal band, but following the success of their song Heavy Metal Pirates they were convinced to permanently adopt a pirate theme as well as folk metal elements into their music.

And a decade later, Alestorm are still here, ruling the seven seas and continuing their "epic quest to drink your beer, steal your rum." Here's their guide to being the greatest pirate you ever could be...

I Thou shalt drink

Observe the rum, the beer and the wine and keep them holy, as the Captain hath commanded you. Six days you shall drink your alcohol and bury all your treasure, but the seventh day is sacred, for on this day you shall drink and drink only, until you do vomit upon the ground (and then drink some more).

II Thou shalt hath no gods before mead

A most holy and sacred beverage, mead is truly the drink of the heavens and all who dwell in them. Brewed in monasteries for centuries, it was the original reason behind the founding of all religions and has been getting priests, kings, commoners and pirates drunk for aeons. Amen.

Contrary to popular belief, as expounded by the 2003 documentary Pirates Of The Caribbean, the rum is never always gone. In reality, if you shout loud enough and fire enough guns, there is always more rum. We’ve actually got gallons of the stuff… would anyone like some rum?

Not just an attractive fashion accessory, the eye-patch will protect the eye from spraying beer cans and shield your retinas from unsightly wenches. It may also be worn under the trousers to cradle your treasure during your morning jog around the ship.

Some tasks are best attempted with a full field of vision. Operating power tools is always a risky business, and it’s nigh-on impossible to chop up your average midget without paying close attention. Think those hook-hands were won bravely? Nah. Some pirates are just clumsy.

VI Thou shalt quest at my behest

Maybe you’ve guessed, but we love to say “quest”. We really can attest to the zest the word brings to every jest, whether you’re stressed, feeling blessed, taking a blood test, or just trying to get dressed. Some will protest, but most have confessed themselves impressed.

VII Thou shalt play a keytar

The keytar first entered the history books in 1732 as the “quay-tar”, the favoured weapon of legendary pirate Sir Henry Portington-Mouth. It was especially efficient during sudden assaults on wharfs or harbours, its steel resonating with canorous melodies as the British Navy were cut down.

VIII Thou shalt not covet thy neighbour’s peg-leg

Peg-leg theft was rife in the 17th century. It was not an uncommon sight to see an unfortunate pirate dragging himself across the floor with the hooks on his hands, in slow pursuit of the thief.

Many pirates have taken to wearing peg-legs simply to avoid the rigours of tying their shoelaces with a hook for a hand. However, knotwork is essential for tying up and keelhauling mutineers. Or for a relaxing game of after-dinner conkers.

X Thou shalt plunder the booty

There’s nothing better than coming across a magnificent chest. Unsheathing your weapon and getting inside that glorious box is perilous but finding that glistening treasure is all the reward a pirate needs.