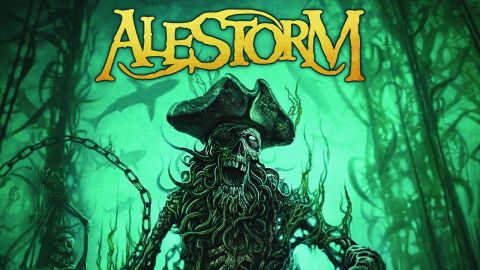 Depending on who you believe, Alestorm are either the most fun a metalhead can have while being fully clothed or an abominable novelty that should never have survived this long. Ultimately, one man’s folk metal fiesta is another man’s intolerable exercise in brainless gimmickry, but regardless of what you think of Perth’s premier purveyors of pomp-powered pirate metal, there’s no denying that Alestorm are both hugely popular and entirely impervious to the sniping of non-believers. No Grave But The Sea is the band’s fifth studio album and is mercifully free of any self-conscious attempts to mature or branch out into other lyrical worlds. Instead, this is simply the next batch of irresistibly boisterous and, yes, rather stupid singalongs, all underpinned by a thunderous blend of folk and power metal, with plenty of contemporary sonic oomph ensuring that, daft or not, these songs sound as preposterous and majestic as intended. It’s an Alestorm album. It’s ridiculous. It’s also hard to imagine a single fan being disappointed with it.

At first, No Grave But The Sea is entirely a case of business as usual. The opening title track and the swarthy romp of Mexico tick all the required boxes, from Christopher Bowe’s rum-pickled snarl and the mischievous parping of his keytar to the rowdy backing vocals that genuinely do sound like the work of inebriated pirates. Newly minted theme song Alestorm takes the band into slightly heavier territory than ever before, albeit with yet another instantly memorable chorus that could hardly be the work of any other band. The epic To The End Of The World is a more adventurous effort, but even though Christopher’s cinematic urges are being more convincingly realised these days, the song’s appeal lies largely in those infectious, folksy melodies and the overwhelming silliness of the whole thing. The same applies to the album’s other two lengthier tracks, Man The Pumps and lavish closer Treasure Island, and yet even though Alestorm continually undermine their loftier musical ambitions by being daft and reducing everything down to a booze-ravaged knees-up, there’s clearly been a lot of thought, craft and care put into making No Grave But The Sea as riotously entertaining as it is.

Meanwhile, one particular song more than justifies the entrance fee on its own. Alestorm have never been subtle and neither have they ever pretended to be more serious or mysterious than they plainly are. But they have never been quite so hysterically childish and, as a result, hilarious as they are on platinum plated album highlight, Fucked With An Anchor. The chorus goes as follows: ‘Fuck you, you’re a fucking SOFTWAREmark” gingersoftwareuiphraseguid=“6e0f9782-a42c-4187-ab25-7db690579b19” id=“1dc7ecc5-48c7-456f-8384-0c98d2cd5e46”>wanker/We’re going to punch you right in the balls/Fuck you, with a fucking anchor/You’re all cunts so fuck you all!’. If ever the world needed an anthem to ease us through the uncertainty and chaos of an age ruled by fuckwits, this is it. And yes, really it’s still about pirates. But that’s what Alestorm do and they do it brilliantly, the silly sods.