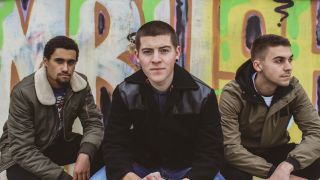 According to Grade 2, the first rule of punk rock is to make something happen.

So, it should come as little surprise that when the UK trio found themselves in the company of Rancid guitarist Lars Frederiksen, they wasted little time in touting him their wares.

“We told him we were getting ready to do a new album,” says vocalist Jack Chatfield. “He told us to leave it with him, and then he came back to us and told us that he’d had a word with Tim Armstrong.”

The rest, as they say, is history. Not only did Hellcat Record boss Armstrong recruit them to his label, he also put himself forward to produce their new album, Graveyard Island.

You can see why the pairing works. An incisive, politically-charged record, Graveyard Island trades in the well-worn pairing of the grinding mundanity of daily life and explosive punk rock, for a collection of songs which are both relatable and motivational. Because as we all know, the first rule of punk rock is to make something happen.

Here, Grade 2 go through Graveyard Island one track at a time. You can stream the album in full at the bottom of the page.

"Tired Of It addresses the modern issue of the severe lack of privacy the people have due to current technology, social media, targeted advertisements, etc. We live in an age where businesses care more about the money they can make from selling personal data than the privacy of their users and we’re fucking tired of it."

"We all know that kind of person that always ends up landing on their feet. Not necessarily someone that has everything handed to them, but someone that always ends up getting lucky. This song begins to paint a picture of that kind of person. However, it's not all as it seems to be; getting hit with the struggles of everyday life, zero hour contracts, high outgoings, and generally having to put all plans on hold. Furthermore, it carries on to explain how, once hit with the struggles, people tend to rebel – until reality comes calling once more."

"The song explains how everything was and is for us growing up. The title Graveyard Island may come across as a criticism to where we're from. However, that is far from the case. While we are proud to say we’re from the Isle of Wight, the many negative aspects of it that have challenged us are hard to ignore. It can be taken for its face value and be pretty accurate to anyone that has grown up in a similar environment of a small town but it is also very metaphorical. It mentions the hardship of being a musician in today's market... with venues closing, guitar-influenced music changing, and the struggle to even be noticed. 'Rock'n'roll has left us now, get on the boat and get out of town/What's it gonna take to put us on the map?'"

"Look Up is plain and simple just a classic feel good tune made to get people moving. We as a band generally don’t let things bring us down, we laugh it off and keep our heads high and we want others to feel the same. Sometimes you just need that feel good song to zone out and forget about your problems, even if it’s just for 2 minutes (and 49 seconds)."

"Murder Town is about the love/hate relationship we have with the touring life style. Murder Town is not referencing a place but rather is a metaphor for being on tour. It is a life that we are forever grateful for and ridiculously lucky to have but all the same it can most certainly can take the life out of you and drag you down at times. However, the good times always weigh-out the bad which is why, despite its seemingly negative message, it’s got that happy and upbeat sound."

"Don't look back, you're not going that way... It's easy to fall back into old habits, or, in particular, not ever break those habits in the first place. We talk about British pub culture specifically, the Saturday tradition. Get your bets on, get into the pub before 12, all sharing stories from the past. We also lightly touch on the football casual scene within the song, mentioning the dress sense of everyone. It's a straight-up punk banger coming in at under two minutes."

"Every British town has at least one ‘local legend’ who spends their entire time at the pub, all day every day. Once again, influenced by British pub culture with a fitting humorous touch. It's all about people like ‘Johnny Aggro’ who have no responsibilities, sleep all day and their main priority is to get back to the pub."

"A location close to the Isle of Wight's central bus station, all about the journey home from a night out described from one person’s perceptive. We've all been in the position of being on a night out, losing the group of mates you were with, so you're left with no choice but to make your own journey home sitting at a bus stop with your headphones in just watching what’s happening around."

"Dover Street – the street where Grade 2 rehearse in their home town, Ryde. Unfortunately, Ryde offers very limited resources for musicians, so the boys have to make do with an old, damp, basement of a church for a rehearsal space. But this song is not to make you feel sorry for Grade 2, but rather about how no matter the environment, once they are playing music together nothing matters."

"Abbreviation for 'Job Seeker Allowance'. Coming out of school at the age of sixteen, in a town where career opportunities/employment are minimal, finding a job is near on impossible. There was a brief period where two of the band's members were left with no other choice but to sign on. This song is a straight up description of our personal experience and what we saw happening around us."

"Monsters was written during a period of time when Jack was experiencing frequent night terrors. It describes the stress of not wanting to go to sleep due to the fear of being woken up by a night terror, i.e. the ‘Monsters’. Over time the stress and lack of sleep starts playing with your head makes you feel mental."

"On The Radar comes back to a similar topic of Tired Of It – a topic we feel so strongly about we covered it twice, once at the start and once at the end of the album. On The Radar sings about the modern privacy issue in a much more aggressive and straight to point manner. It is full of rage and hate for those who have brought this dark reality upon us, and even more importantly for those bringing an even darker future upon us. It faces the depressing reality that ‘the radar’ has complete control and as it stands we are powerless. This song is written in hope that it will spark some rage into the people, into the young people and to those who are unaware that this isn’t a normal way to be living."

Grade 2's new album, Graveyard Island, will be available via Hellcat Records on 11 October and is available to pre-order now. Catch them live at one of the dates below, and check out the full stream of their album right now: