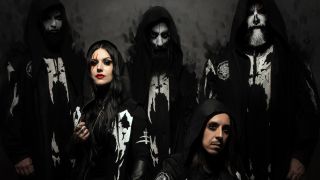 Earlier this month we took goth metallers Lacuna Coil to the London Dungeon and hosted an exclusive interview and album playback of their forthcoming new record Black Anima – which will be released on October 11 via Century Media.

It was an incredible night, packed full of terrifying interactive tours (including Lacuna Coil's own Cristina Scabbia and Andrea Ferro disguised in plague doctor outfits to terrify their greatest devotees), an in-depth interview where the duo revealed all about the new album, and a listening session where fans were treated to a full playback of the new record over a month ahead of the release – all of which you can see in our exclusive gallery!

Tickets for the event flew out quicker than we ever imagined – as you can imagine, there isn't much space in a dungeon! However, we were there to document the whole thing for all you fans who missed out.

We go behind the scenes and chat to Cristina Scabbia and Andrea Ferro – who were adorably terrified to unveil the new album live in front of their most devoted fans – and chatted to some of those lucky fans to find out what you can all expect from Black Anima (clue: it's fucking heavy!).

Watch the full video below!

Lacuna Coil will embark on a UK and European tour with Eluveitie throughout November and December.