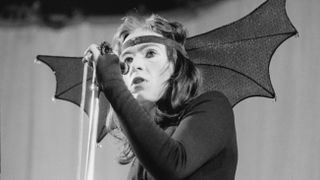 Today it sounds as unique, dramatic, thrilling and ambitious as ever. It’s where the classic line-up of the band came fully into being; it’s when they realised how much they could do, how far they could go. “It was about creating a film for the ear rather than the eye,” says Steve Hackett. “And it even got to Number 12 in the charts,” Tony Banks laughs. “Of course the next week it went down to Number 27 or something, but it was our first moment of scoring anything, so we felt that we were underway, that we were heading somewhere different. Foxtrot was where we first started, in my opinion, to become significant.”

While all of its tracks are strong and inventive, Foxtrot is unavoidably dominated by the 23-minute, seven-part suite which graced what used to be side two. Supper’s Ready is one of the towering landmarks of prog, dovetailing short surreal pieces with moving neo-classical reprises and recapitulations, serene flows with shuddering staccato, parochial realism with pulchritudinous dreams. Across this fire from the skies, Peter Gabriel sings of battles between good and evil and love and war, of firemen, farmers, flowers (‘a flower?’), and a frog who was a prince (who was a brick) (which was an egg) (which was a bird). And of 666 and a new Jerusalem. Startling then, it remains a stunning achievement of vision and scale. Roger Taylor of Queen has called it, “at separate times, homely, beautiful, tortured and epic.” ‘We’ve got everything,’ it declares presciently. ‘We’re growing everything…’

While Supper’s Ready is the main course, Foxtrot should however be appreciated as more than just a set of appetisers leading up to it. It’s strange to learn that the album came about in a relatively ramshackle manner: no great master plan had been conceived.

The band sought a producer who could capture their improving live sound, and to that end had meetings or sessions with Paul Samwell-Smith, John Anthony and Bob Potter. None was quite the right fit so David Hitchcock, whose work with Caravan had impressed, came in, with the more outspoken engineer John Burns.

Steve Hackett was fatigued by the heavy touring schedule and still somewhat intimidated by his fellow band members’ prowess (“these guys are so good”, he’s recalled thinking).

In 2012, having just re-recorded Supper’s Ready and others for his Genesis Revisited II album, he remembers the steps towards Foxtrot more fondly. “There weren’t a lot of days off; we were a hard-working live band,” he says. “Whereas with its predecessor, Nursery Cryme, we’d taken the summer off and written and recorded together as a unit, bonding the team, this time we were on the run, in and out of the studio. I remember flying back from Italy to be in there a day or two ahead of the others, who were travelling by road, just to finish off my guitar parts on the end of Supper’s Ready.”

If there’s one album that doesn’t sound like a rush job, it’s Foxtrot...!

“Maybe not. But when you’ve done something, you know what your intention was. The perpetrators will always be looking for improvements. We generally agreed to a man that we recorded Watcher Of The Skies too fast. To my ears now it sounds like a young band desperate to get the notes right in a race to the finish. Once we’d been playing it live for a while, we relaxed into it and it sounded bigger. The version that ended up on

Genesis Live is more in-the-pocket. That rhythm is almost impossible for any band to play perfectly! It’s full of pitfalls.Yet there’s lots of weird and wonderful stuff; it’s a band at its most creatively eccentric.”

Rehearsals (and writing sessions) in a variety of locations may have coloured the album’s angles and attitudes. Hackett recounts that Foxtrot was worked up in a variety of “drab, functional” places, until they moved (without Gabriel, who added the words later) to the Una Billings School Of Dance in Shepherd’s Bush. “There were girls dancing upstairs, learning their tap-dance and what-have-you. And the sound of that, those rhythms would come down through the ceiling. We were below in what had been a refectory, so you had a counter here and a gobstopper-dispensing machine there. It was all a bit strange, and the atmosphere influenced our subsequent efforts. Much of Supper’s Ready was written in the two weeks there. With the tap-dancing upstairs, you couldn’t be too serious for long, because you’d hear them: clumpety clump clump. That rhythm would kick in, and we’d have to break into smiles…”

Watcher Of The Skies had grown out of Banks “fooling around” with the Mellotron. “We bought one of the ex-King Crimson Mellotrons,” he notes, “and Robert Fripp insisted it was the one they’d used on In The Court Of The Crimson King. Mind you, he had three, and I’m sure he said that about all of them when he was selling them.”

Hackett too emphasises the importance of that instrument to the album. “I’d kept hammering on that we should get one, saying it’d make our story-telling abilities so much greater. It meant that the band could function as a time machine, with all these various mythologies. The idea was that all the old instruments were there within the Frankenstein that was the Mellotron.It was like an alien orchestra being beamed to you by satellite. And you need to be able to smell the dust from time to time. It had a… cold warmth. I think it’s actually the most influential keyboard instrument in the whole of rock.”

Banks reckons people had never heard “a big, big sound like that” before. It brought the album in with an impossible-to-ignore surge.

“Time Table, Get ‘Em Out By Friday and Can-Utility And The Coastliners don’t get as much attention as the others,” agrees Hackett, “but they’re all part of the journey.” Not least because of Gabriel’s always busy, multi-voiced lyrics. “Yes, there’s important social comment on Get ‘Em Out…, and the rest is hardly boy-meets-girl, is it? And the sci-fi elements show that mythology doesn’t have to be backward looking. Time Table has something: there’s a magic between the piano and the six-string electric. It chimes. You get that third instrument – not piano, not guitar – where the distinction between them is blurred. The ensemble work welds instruments together, grafts them onto each other like that Star Trek mind-meld. It’s not so much an album of solos.

So how was the response to Foxtrot upon initial release? Were people dazzled, confused, appalled, or exhilarated? Or just indifferent?

“All of those things,” muses Hackett. “Don’t forget, we weren’t The Beatles.

Just before they released Sgt Pepper, they worried whether they’d gone too far and whether the crowd might give them the thumbs-down. We felt in a similar position. It was early days for the band. We just weren’t sure. We’d really gone out on a limb with Supper’s Ready, it was labyrinthine with layers, and it was by no means certain that the response would be positive.”

Of course Paul Whitehead’s surrealist sleeve design is as much a part of the Foxtrot “immersion” experience as that pyramid-prism is to The Dark Side Of The Moon. Gabriel certainly dived in, courageously donning his wife’s red dress and a fox-head for stage shows. “It’s interesting how the most cherished albums have the most cherished sleeves,” ponders Hackett. “I think for fans of it there was always that feeling of looking at it and thinking: I’m onto something here that other people don’t necessarily know about. One’s taste becomes tribal: these albums become important bonding elements. Where language leaves off, music begins, and you share a dream.”

A dream that’s lasted 40 years and counting, in the case of Foxtrot…

“Musicians do tend to disparage their early work: the need to continually move forward can be everything. I prefer to celebrate it, and look for what’s right about it. If you have passion, energy and honesty you will come up with something valuable. You don’t always verbalise it as a band, you try to do things instinctively, listening closely to each other without ego - and sometimes you get a great crystallisation. You may not recognise it at the time, you might think it was just a doodle, but someone else will see it as a full-blown portrait, a Mona Lisa. The musicians might still be searching, but the audience, the true owners, will say: look no further. We’ve found it.”

This article originally appeared in Prog #31.