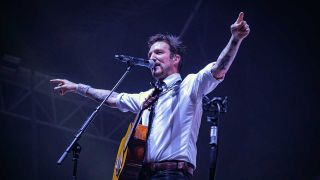 "I've long been planning on writing a song about the northbound Northern Line platform at Waterloo Station," says the former hardcore punk-turned-folk-singer-songwriter. "That was a place of much excitement to me. As a kid, coming in from Winchester, I wasn't interested in getting to anywhere else in London. It was always Camden."

This weekend, Frank Turner puts his money where his mouth is, returning to the borough to headline the annual Camden Rocks festival. With 400 bands playing and a line-up that also features Deaf Havana, Ginger Wildheart, Ash, The Quireboys, New Model Army, A, The Wonder Stuff, Glen Matlock, The Virginmarys, Angelic Upstarts and a host of known and less well known acts, it's an event that breathes community, with festival goers thronging the streets as they race from venue to venue.

Frank's been coming to Camden since the mid-90s, heading in from leafy Hampshire with one destination in mind. "I'm not entirely sure who told me this," he says, "but it was just understood that Camden was where you went if you were a punk or, more broadly, if you were into alternative culture.

"When I was kid tribes were more of a thing: you had goths, and punks, and indie kids, and we were grebos. If you were part of that kind of alternative culture, you went to Camden."

In 2019, it's still true. The cashpoint machine opposite Camden Town tube station is officially the nations's busiest, with queues of people emptying their bank accounts to spend hard-earned cash on music, clothes, jewellery and tattoos. And, this weekend, behind the bars at the 20 venues taking part in this year's festival.

What should people heading to Camden Rocks do to make the most of the event?

"I think the main thing I like about Camden Rocks is that they're essentially sneaking in a new band festival under a thin veneer of established acts," says Frank. "It's cool that I'm playing and that Ash are playing and that the Pigeon Detectives and everyone else are playing, but what's important about the festival are the new bands.

"My plan is to show up on Saturday at Midday and just wander up and down the street listening to stuff. I'm not going to get any recommendations or do any checking beforehand, I'm just going to bounce from bar to bar away and wait for something to grab me."

Tickets to Camden Rocks are on sale now.

Do you have a favourite Camden venue?

"I would probably pick The Monarch. I've played there more times than I've had hot dinners. It's run by friends of mine and it's kind of my local in Camden. If I've got no other specific plans, I go to The Monarch."

Do you have a favourite gig of your own in Camden?

"The Lost Evenings Festivals we did at The Roundhouse were very special occasions, but if I had to pick one, I'd probably go for a headline show in August 2006. It was at the old Barfly, and it was the first gig I ever sold out.

"I had just arrived back from a very long and very hand-to-mouth DIY run in Eastern Europe, and this news was so far outside my realm of thinking as to how my career was going that I couldn't really understand what they were trying to tell me. I was asking, 'What do you mean? Will there be tickets on the door?' And they're 'No, they're all gone.'"

What about gig of someone else's in Camden?

"There are very many to choose from. I've seen some amazing gigs in Camden over the years. I'm friends with the band Reuben, who also started out on Xtra Mile [alongside Frank's post-hardcore band Million Dead], and I remember them playing The Electric Ballroom in about 2006 and it was awesome."

There's talk of like a Hollywood-style Camden Walk of Fame. What do you make of that idea?

"That's the first I've heard of that. I think it's kind of gross, but it'll probably happen anyway. I mean, I think that the Amy Winehouse statue is a travesty, and that Amy would have hated it."

Do you have anything special planned for the festival?

"I do actually, for once in my life. I've got the solo headline set, and I haven't done one of those in quite some time, so that should be special. But there's also discussion about an encore that involves other musicians, with some sort of punk rock covers group coming together for the end of the night. It's still slightly dependent on whether or not we can find time to rehearse, but it's under discussion."