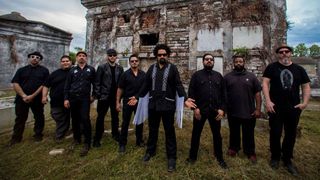 While the success of most tribute acts is based on their musical proximity to the band they’re paying tribute to, there is an alternative route, which is to take someone else’s original material and reshape it completely.

Think Battle For Seattle, an album in which Jamaican musician Little Roy puts a roots reggae spin on a series of Nirvana songs and succeeds so successfully you’d swear the songs were written on a sun-splashed Caribbean beach rather than in the rain-soaked Pacific Northwest. Or Hayseed Dixie, whose first steps were almost entirely based on plundering AC/DC’s back catalogue for songs they could turn into bluegrass stompers.

Then there’s Brownout, a Latin-flavoured funk collective from from Texas who play sets of Black Sabbath songs. Tony Iommi’s churning, metallic riffs are replaced by a horn section, and everything is delivered with a furious amount of full-throttle funk.

There’s no novelty about Brownout. A successful funk band in their own right — they’ve played back-up for Prince, and he knew a thing or two about such matters — with a serious penchant for Birmingham’s finest, they’ve followed up 2014’s brilliant Brownout Presents Brown Sabbath with, yep, you’ve guessed it, Brownout Presents Brown Sabbath, Vol. II.

“When we recorded Volume I, we had only played a couple of live shows, and it was a very new thing,” says guitarist Adrian Quesada. “We’ve grown as a live band and gained a new level of confidence and ownership over what we do with Black Sabbath. It was important to capture another moment in time showing the band’s development and stamp on the music.”

Other tracks recorded by the band for the new album include Supernaut, Snowblind, Symptom Of The Universe, Children of the Grave, Electric Funeral, Sweet Leaf and Sabbath Bloody Sabbath. It’s released on CD on October 28, with a vinyl version due later in the year, and we can’t wait.