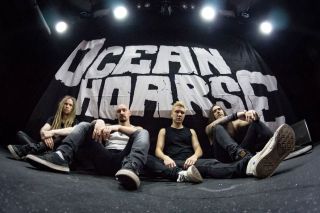 Nero might have fiddled while Rome burned, but it’s a pretty measly instrument to soundtrack the wholesale destruction of all you know. Now that we’re all teetering on the brink once more, what you really need is a massive guitar break, the kind of muscular metal grooves that can bear the weight of our downfall and a huge voice that’s up to the task of spelling out our doom, but with a bit more concern than our historical emperor.

Finland’s Oceanhoarse are clearly up for the task. Emerging from the ashes of Amoral and For The Imperium, the four-piece’s huge-sounding, melodic riffs that cut straight to the heart of any Trivium fan. They’ve recently taken on new vocalist Joonas Kosonen and have let him loose on a new track, Death Row Center, that stares directly at the worlds ills and makes a suitably epic statement on its behalf. Although it's available on all the major streaming services now, we have an exclusive premiere of the song’s video, one that not only shows what a shit-hot live band they are, but that also embodies the madness surrounding us.

”Although grievance, oppression and agitators have always existed,” says guitarist Ben Varon, “it’s just grotesque how nowadays these themes are becoming clearer and more visible to the public eye yet they are still untouchable, so the status-quo stays. The title is a reference to the term ‘front row center’, meaning the best seats of the house. In short, we are all destined to sit in the front row to witness the train wrecks happening around us.”

So without further ado, pull up a chair and throw yourself into the pure heavy metal maelstrom that is Death Row Center below!

And stream more tracks from the band on Spotify here!