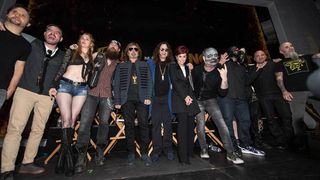 Last night, two of the most prominent metal festivals on planet combined their powers into one amorphous mass of heaviness. Ozzfest and Knotfest are meeting each other for the first time in California this September, and to make the special announcement some of the biggest names in metal turned up to the Palladium in Hollywood, California.

As the hordes filed in to the venue to see the announcement first-hand, we bumped into a group of freaks and carnival performers – who will apparently be in attendance at the festival!

Speaking to the amassed crowd inside the Palladium, Ozzfest mastermind Sharon Osbourne said: “20 years ago, we realised that there was no touring festival that supported music like these guys did.

“We came up with Ozzfest and for 20 years it was amazing. And for many of those years we had the unbelievable Slipknot playing. And Slipknot came along and kicked our arses and created Knotfest.

“They took that around the world and it was hugely successful and critically acclaimed as one of the best festivals on Earth.

“Then we decided, ‘Why not merge together?’”

Ozzfest Meets Knotfest is taking place at the San Manuel Amphitheatre in California on September 24-25. As is tradition, Black Sabbath will be headlining the Ozzfest day and Slipknot will be headlining the Knotfest day, and they’ll be joined by the likes of Opeth, Slayer, Amon Amarth, Anthrax, Megadeth, Suicide Silence and Disturbed.

Is this a sign of things to come in September?

Tickets go on sale for Ozzfest Meets Knotfest on May 20, via the official website. We’ll see you in the pit!

(All photos by Stephanie Cabral)