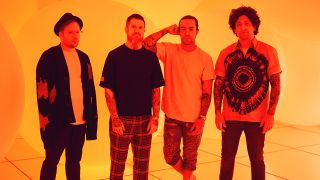 When Fall Out Boy released their first greatest hits album, Believers Never Die, in 2009, they were experiencing a full collapse. Exhausted and fighting within themselves after over four years of near-recording and touring, the band played their final show in October 2009, during which Mark Hoppus symbolically shaved bassist Pete Wentz’s famous head of hair.

The message was clear: Wentz, and his bandmates Patrick Stump, Andy Hurley and Joe Trohman, were done. The ensuing four-year hiatus wasn’t broken until 2013 and the release of Save Rock And Roll, a drastically different record that saw the band doing the impossible: reinventing themselves and kickstarting a successful second coming. With the recent release of Believers Never Die Pt. 2 in November, almost ten years to the day of Pt. 1, a keen onlooker might ask: does this mean another end is in sight?

“There’s not an impending hiatus, but there’s also not impending new music. I don’t know. We don’t have anything coming up beyond Hella Mega tour,” says Wentz over the phone in LA. “There’s just nothing on the horizon. We need to figure it out,” he adds. He’s in a good mood, and with record label DCD2, a family and new jewellery and apparel brand Ronin to think about, he’s keeping fairly busy.

He’s keen to reiterate, too, that this is nothing like 2009. “There’s so much going on. Music changed so much at the time and our friendships were strained. I think we were just burned out. That doesn’t exist in the same way this time.”

Of course, even if there are no imminent plans for new music, it doesn’t mean Fall Out Boy are slowing down. The Hella Mega tour – a tour that will unite them with Green Day and Weezer in an international stadium tour of epic proportions – was announced in September, sending fans both current and former into a frenzy. Many shows sold out, pushing Fall Out Boy to the forefront of public consciousness once again.

It also led some to ask: why these bands? “In our band, we’ve always asked, what is the Monsters of Rock equivalent?” explains Wentz. Of course, organising three massive bands to collaborate on a united vision is no small mission. “It’s a massive undertaking, the stadiums and stuff. It’s a lot just being in a band with three other people. Trying to figure out all these moving parts and egos is hard. We had to think, if we’re into the idea, we’re going to have to find ways to figure stuff out.”

He adds that he’s been happy with the reception: “It’s been great so far, we haven’t played even one date yet! The lead up to it and the little show we played together was fun.”

Most people who are aware of Fall Out Boy divide their work into two distinct timelines: pre and post hiatus. “It makes sense to give some of these eras official starts and ends. It’s easier for us to wrap our heads around what all fits where,” says Wentz. Fans and detractors are united by one common truth: that the music released either side of their break is distinctly different. Pre-hiatus, Fall Out Boy’s legacy was defined by their attachment to emo and pop punk, despite losing most signs of either by 2008’s Folie à Deux with its ballads and theatrics.

2013’s comeback album Save Rock And Roll, their most pop album to date, took their flirtations with the mainstream to new levels. “I definitely know that the stuff post-break doesn’t necessarily fit side by side chronologically, at least, or art-wise, with the earlier stuff. In some ways you can probably compare the three albums post-hiatus to the three after Grave.” says Wentz. That style development culminated in last year’s MANIA, a ridiculously bold album that pushed boundaries, even for them, with sidesteps into reggae and dubstep.

He wants to make it known, though, that while there’s no plans for new music, signalling a hiatus isn’t the intention of the new compilation. MANIA felt so completely ridiculous, so personal – a wish fulfilment on the part of the band to do things that they wanted to do. Fall Out Boy have never made music for anyone else, and Wentz is keen to keep it that way. “Everyone has such disparate adult lives now, and if we do new Fall Out Boy music it’s really got to be purposeful. I think doing it for the sake of it, nobody needs that,” he adds, “if it’s just a filler album, it’d be a bummer. I’d rather not make one than do that.”

“George Lucas always said Star Wars is like poetry,” says Wentz, taking a slight detour that those who have heard him speak will recognise. He makes Star Wars references with an almost compulsive regularity, which makes some sense: there’s little to compare Fall Out Boy to in the music world, so he has to pull associations from somewhere.

With this particular reference, he’s comparing the eras of the franchise to his own work. “It’s so interesting when you’re on a long timeline, because then you can go away from something and come back to it. I’ll run into people at the airport and they’ll be like, whoa, you guys still make music! Then I’ll run into kids at my kids’ school and they’re like, oh my god, Uma Thurman is the most important song to me!” he says of the distinct eras of Fall Out Boy.

“If Star Wars had been those three movies from the 70s and 80s, I don’t know if you would debate it all the time.”

With the two (so far) eras of Fall Out Boy, there is an almost militant divide between “old” and “new” fans. By the time Fall Out Boy came back, emo had died down, and many fans had disappeared with it. The distinction is something Wentz has found peace with: “On a long enough timeline, you can love some of it and not other parts of it. You can rank it and you can argue with your friends,” he says.

Many artists become embittered knowing that they have fans with no interest in hearing their newer work, but Wentz isn’t one of them. He understands how that happens. “It’s hard to describe the weight of someone’s nostalgia. Where you are, especially at certain ages, the things you’re going through, it’s hard trying to tell someone why something matters to you. I got into some punk rock when I was 16 and I was going through some stuff, and I don’t know if I would like those things in the same way now but at the time it meant so much. The feelings were so visceral.”

For many fans – myself included – that nostalgia only underpins a greater fandom. It isn’t the only thing bringing fans back to shows: it’s just the thing that kickstarted it. In recent years, adults who repressed their teenage loves have started to rediscover them, which has invigorated a revival of interest in 00s emo-associated bands.

It’s something Wentz has seen, too: “You go to college or wherever and all of a sudden you feel embarrassed of those years. Like you’re not cool enough. Then sometimes you go into the real world and the real world isn’t always super great, so maybe it’s just OK to like some of the stuff that you like? I’ve noticed that a lot, people come back to it. It’s an interesting thing to be a part of. It’s a bigger thing than us.” He adds, emphatically: “There’s just something great about being unabashedly comfortable with what makes you feel happy and what feels good to you.” It’s clear that he’s not only spent a lot of time thinking about what he’s saying, but that he really believes it.

When Fall Out Boy went on hiatus in 2009, they left behind the broken hearts of their teenaged, primarily female, fanbase. With their comeback in 2013 they found that while they’d lost a lot of them, they had gained an entirely new fanbase; albeit a still young, female one.

For Wentz, the obsessive fanaticism that those fans can bring isn’t a source of shame, it’s one of pride. “If you look back on history, on bands like The Beatles, they’re critically loved artists. But a lot of them started because there were people, especially girls, that really loved them. I think that’s really cool. I think people will look back on Harry Styles in a similar way,” he says.

“I would say that a lot of things that I really like that are critically loved throughout history probably started that way. I think that’s great.”

Before we get cut off for talking too much, Wentz has a final thought on fandom, both his own and more generally. He’s understanding of where his fans come from because at his heart, he’s a nerd, too: beyond Star Wars, Fall Out Boy’s lyrics are littered with references to films, books, and music. He understands obsession.

“That’s what drives popularity. History looks back on it in a different light, but at the time people considered it disqualified. If all these people love it, maybe I have to look at it in a funny way. You should just like what you like,” he says, laughing that it’s “lame” to dismiss things that people enjoy.

He in part is referring to his own band’s lengthy, multi-faceted legacy. Fall Out Boy have always been divisive. Initially scoffed at for their fanbase of teenage girls and boys in skinny jeans, they’ve managed to win the respect of even the hardest of critics. The Hella Mega Tour signalled a new era for Fall Out Boy: history is being rewritten in real time, and they may well be canonised alongside “monsters of rock”.

But as the band sell out arenas and grace the covers of magazines once again, let's not forget the people who were on the right side of history before it was rewritten: the all powerful fans Wentz speaks so highly of.