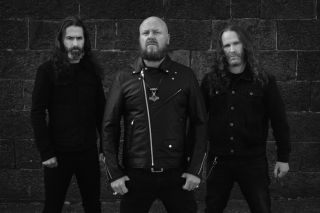 Hailing from the frozen wastes of… Melbourne, Australia, melodic black/death metallers King are proof that the efficiently epic, blizzard-scything sounds of Satyricon and Immortal not only know no geographical boundaries, but that they can take on new life when handled by a bunch of extreme scene veterans with skill and vision to spare.

Three years after their well-received debut, Reclaim The Darkness, the trio – whose collective CV includes Pestilence, The Amenta, Blood Duster, Fuck I’m Dead and a host of other bands – are back with the follow-up, titled with absolute disregard to their local climate, Coldest Of Cold.

Stuffed with precisely calibrated neck-wreckers, hooks that could land Moby Dick and riffs that will leave you like an arctic cat chasing a laser beam, Coldest Of Cold – released on November 22 via Indie Recordings - still proudly wears its influences on its sleeve, but attains the kind of triumphant peaks only the most seasoned and determined traveller can reach.

If mountain tops, epic battles in whiteout conditions, and tales of extra-terrestrial terror to boot are your kind of thing, then rejoice, because we are exclusively streaming the album in its full, frostbitten glory below. All hail!

And pre-order Coldest Of Cold here!