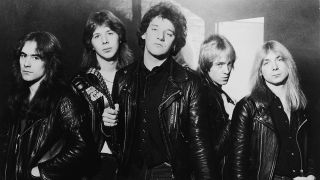 In truth, the New Wave Of British Heavy Metal was a direct result of punk. Metal bands grabbed punk’s DIY baton and ran – pressing their own singles, booking their own gigs and giving a swift two fingered salute to the ambition-stompers in corporate music business sausage machine.

We could theorise endlessly why the new British rock explosion detonated at this exact time: soaring unemployment; Maggie Thatch and free falling social decay; the miners’ strike; inner city riots; planetary alignment; extra-terrestrial activity or the price of fucking cheese… but the simple explanation is that it was just meant to happen.

Maiden prime mover Steve Harris is insistent that it didn’t happen overnight, for Maiden anyway. “We’ve paid our dues like most bands,” he says. “We’ve done the clubs. Maiden took four-and-a-half years to get a recording contract. It’s not like we just appeared.”

But that was how it seemed. The beginning of the NWOBHM – regarded by many to be a Maiden, Angel Witch and Samson gig at London’s Music Machine on May 9 1979 – opened the floodgates on a veritable tsunami of exciting new British rock.

It’s true. UK metal never really went away, it just didn’t make the headlines for a while. But after the 60s tri-partite supernova of Sabbath, Zeppelin and Purple burnt and faded, it took until the tail-end of the next decade for British rock to gather enough old tyres together to light a convincing fire under the press’ arse.

Harris is right enough, there were bands like Priest and Lone Star along the way – as well as monster bands from across the Atlantic like Kiss, Aerosmith and Rush, and even one or two, the Scorpions for example, from Europe. But there was no internet, no specialist rock press – you had to be supremely dedicated to be a rock fan back in them days.

The shape of punk to come: How punk became part of classic rock's story