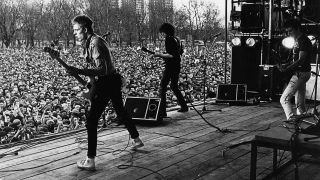 Forget the fabled 100 Club Punk Festival of September 1976. It wasn’t until the Anti-Nazi League’s Rock Against Racism Carnival in April ’78 that punk truly graduated from being a metropolitan, elitist cult into a populist movement to be reckoned with.

“There was a triumphal feeling about the event,” remembers bill topper Tom Robinson. “Never before had so many people been mobilised for that sort of cause. It was our Woodstock.”

Anti-Nazi League co-founder and Labour cabinet minister Peter Hain, meanwhile, reflects on the event’s wider influence: “The carnival was a complete watershed, a fusion of popular culture and politics that had not been achieved before and that has only since come close with the Free Nelson Mandela concert at Wembley a decade later.

“I thought it was the critical blow against the National Front. It mobilised a generation of young people – students, schoolchildren and others, especially working-class kids. I remember vividly at that carnival punks and skins coming out against the Nazis. It was a dangerous time, and it could have gone the other way. I think it was decisive in running the NF out of town, and it helped create a climate in which being racist was not acceptable.”

April 30 was the first big date on the 1978 punk calendar and nobody really knew what to expect. Had the kids in ripped T-shirts survived 1977’s long, hard winter of discontent? While The Clash had politicised punk in the sense that they talked a good argument, and liked to paint slogans on their clothes and pose in the Falls Road, it was the Tom Robinson Band that actually got punks wearing Rock Against Racism badges and marching against the National Front.

Three coaches set off from Chelmsford on Sunday morning, and there was much conjecture as to how many people would turn up. It had been reported that RAR were expecting up to 30,000 (a rough estimate based on the number of badges they’d shifted). Even by ’78, punk’s true pulling power remained unproven. The coaches parked-up close to Trafalgar Square, which was rammed with placard-wielding politicos.

Eventually, with regimented chants of ‘Black and white unite and fight, smash the National Front’ we trudged towards the East End, where phalanxes of police held back counter-demonstrating skinheads at various flashpoints along the route.

As the crowds swelled, trepidation gave way to triumph and the adrenalin pumped like raw amphetamine as we approached the park entrance. On hearing X-Ray Spex explode into life we ran the last few hundred yards to find all our expectations surpassed: there were 80,000 in the park and they all appeared to be pogoing. X-Ray Spex were utterly astounding, although Poly Styrene’s foghorn delivery immediately showed the limitations of the PA.

And so, as The Clash took to the stage, herds of feather-spitting punks cautiously clasped onto plastic cups of tea. The Clash were on fire, feeding off of an ecstatic audience and premiering as yet unrecorded material (eventually released on Give ‘Em Enough Rope the following November) like Tommy Gun and The Last Gang In Town. The show was a revelation; other than the cheap speed blur of the first album, the only hints as to The Clash’s (and therefore punk’s) future had come in the shape of Complete Control and Clash City Rockers, two solid chunks of self-mythologising.

The Last Gang In Town, meanwhile – sophisticated and decidedly non-punk as it was – sounded like more of the same, in that it was clearly all about The Clash. Even the crap PA couldn’t hide that. Nor could Mick Jones’s cap hide the fact that he’d grown his hair. He looked more like Keith Richards than ever, and it looked deliberate. Paul Simonon’s jacket was a dazzling peacock blue, and a million miles from paint-splashed overalls.

After romping through White Riot with Sham 69’s Jimmy Pursey sharing lead vocals, The Clash’s appointed time was up. Somewhat uncharitably, Tom Robinson’s roadies (fearing an encore that would eat into their man’s stage time) attempted to pull the plugs. Meanwhile, film director David Mingay (there shooting live footage for Clash movie Rude Boy) encouraged the film’s star, Ray Gange – who had, it has to be noted, enjoyed a little light refreshment – to address the crowd.

“I grabbed the mic and just started shouting,” Grange remembers of his rabble-rousing. “It had been so exciting that I thought whatever was going to follow was going to be drab in comparison. I couldn’t conceive that the crowd weren’t prepared to storm the stage to make sure it continued. Why would you want that energy to stop? At that moment I just wanted it to continue for the rest of my life.”

Gange wasn’t alone; the crowd were equally incensed, and might well have stormed the stage if they’d supped anything stronger than tea.

As Steel Pulse took to the stage in appropriate hoods to deliver their current hit single Ku Klux Klan, we ventured to the back of the crowd and discovered The Ruts performing on the back of a flat-bed truck, with a petrol generator-powered PA, repeatedly playing In A Rut to an enthusiastic gathering of punks who wouldn’t forget them in a hurry.

Tom Robinson came on and did his thing, but no one was particularly bothered. Mick Jones popped up for the encore but, prior to all the coaches leaving, the rest of the day was spent marvelling at just how many punks we were. Crazy colour had arrived in a big way. Up until then a Billy Idol bleach job was about as far- out as punk could go; suddenly everybody had a head like a mandrill’s arse. Ant fans had started to sport kilts.

Erect Mohican haircuts, once the preserve of hardcore hippy squatters, were now also being embraced. Leather jackets were being personalised to show who came from where. Punks were metamorphosing into more colourful creatures before our very eyes. The ranks of the last gang in town were steadily swelling and, as Poly Styrene had pointed out earlier, this really was The Day The World Turned Dayglo.

And it wasn’t over yet. As we all piled back onto our coaches and headed for home, we were all well aware that The Lurkers were on at The Chancellor Hall – and the bar was already open.

This article originally appeared in Issue 109 of Classic Rock Magazine.