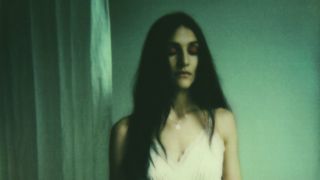 Finishing as a runner-up in the Swedish version of popular TV karaoke contest The Voice in 2012 is not the sort of backstory you’d usually expect of an artist gracing these pages, but then there is little about the work of Nicole Sabouné that is to be expected. Now 23, the singer-songwriter has worked hard to separate herself from such affiliations, undertaking a hard-fought journey of self-discovery in the process. She looks back upon the experience as surreal.

“I don’t have many memories from that time, it went by very fast,” she reflects, speaking with a delicate eloquence that does little to hide occasional flashes of self-consciousness. “I’d just turned 19. It’s a weird thing to be part of. You’re locked in a room with these people, and you don’t think it’s televised until you see yourself on TV, and then it’s like, ‘Was that real?!’”

Harnessing her darker inclinations, Nicole found herself in the role of the show’s ‘alternative’ singer, performing songs by the likes of Kate Bush – one of several revered singer/songwriters that, to this day, she takes heavy influence from. With an individualist take on the slew of darkwave/synth/goth/ death rock sounds of the 1980s that’s seen a huge upsurge in popularity in underground music in recent times, she’s elevated by her singular vocal power. Akin to Siouxsie Sioux in delivery, her rich, feminine baritone is enthralling in its beauty and obsidian in its romanticised depictions of darkness.

Nicole Sabouné is not a ‘metal’ artist, but akin to the likes of Darkher, whose apocalyptic folk is infused with the grim portent of doom. Her music is leaden with sentiment and soundscapes, not to mention a wilful desire to explore uncharted territories, which makes her music entirely identifiable to those who search the shadows for inspiration.

“We have so many things in common,” she says of her relationship with the metal world. “We do see darkness as a positive thing, a beautiful thing and I think that unites the genres. I like black metal the most… I don’t see myself as a black metal girl, but if you peek into that world and see the light they’re spreading, you can grab it and create something of your own.”

She laughs loudly and often throughout the conversation, enthusiastic to be talking to an extreme metal magazine about her music, appreciative of the journey she has thus far undertaken. “It’s about crossing borders, you know?” she enthuses. “I’ve never seen worth in being labelled, I’ve just seen my creativity as the first – the only – thing I want to do. I want to express myself, to write songs.”

Moving to Stockholm to escape a smalltown mentality that she found asphyxiating, Nicole’s upbringing consolidated an outsider status that permeates her music, developing a resentment of human ignorance that her family was at the sharp end of. “My dad is Lebanese but grew up in France, and that was an issue in a very small town in Sweden. There was a lot of racism. The current party leader for the racist political party in Sweden is from my home town; it was not fun. My dad actually moved to another town when I was seven.”

Such blind hatred had a lasting impact upon Nicole, but it’s something that she has gained perspective on in adulthood: “I’m not surprised today; I see how that town is, I see how people there are still there. It’s just sad.”

That such a small-town mentality has gained traction on much larger political platforms is lamentable, as society turns increasingly to the right, seeking regressive, xenophobic solutions to problems that present a huge step backwards for social and environmental concerns. All these issues fuel Nicole’s music. Built on gothic elegies mourning the death of human potential, her second album, Miman, harnesses the metaphoric powers of science fiction – ever a potent vehicle for dissecting society’s ills. A concept album at heart, Miman is an adaptation of a classic 1956 Swedish poem by the writer Harry Martinson entitled Aniara: a cautionary Cold War-era tale of a dystopian future in which a human-orchestrated cataclysm forces the species to depart the Earth on a starship, in search of a new home. Knocked off course, the ship hurtles uncontrollably into oblivion, its inhabitants forced to come to terms with their impending extinction.

Each song on Miman is written from the perspective of a member of Aniara’s crew, all characters made up by Nicole, and abstractions based upon a poem that so deeply inspired her. “Miman is the AI that stores the human’s memories in the ship’s computer system,” she explains. “It becomes a goddess for the humans on Aniara. They pray to her, but Miman dies in grief when she sees what the people have done to Earth.”

It is a tale that has had a profound effect on Nicole’s life. “I read Aniara for the first time when I was 14. When I finished my last tour and wanted to write this record, it just came back to me. It’s my favourite book. It’s so ahead of its time. It’s also very scary because you can read it now, 60 years later, and you can see that we haven’t moved forward, we’ve moved backwards. But that’s why we listen to dark music, right?” she laughs darkly.

Currently studying maths and physics at university, Nicole found the writing and recording process exhausting, turning her keen intellect in an alternative direction to get some perspective. Where she goes from here is anyone’s guess, including her own. It’s all part of a personal process of self-discovery.

“Not just writing, being with another person, being a sister, being a daughter, studying, all create me and develop all of the Nicoles that are in me that I like to explore. Miman is only my second album, but it felt like my life’s work,” she laughs. “It was so huge to me; but now a year later I have so much more to write about.”

There is much to take from Miman, as the portent of its tale unfurls with repeat listens, a journey into unknown realms of space that says much about the fragility of the human condition. Its open-minded approach, its desire to grow and break boundaries are all valuable lessons. In times like these such music serves not only as an affecting lamentation, but also as a reminder to see past boundaries and restrictions; to break them, be they musical, racial or political – a clarion call for evolution at a time when it is most needed.

MIMAN IS OUT NOW VIA CENTURY MEDIA