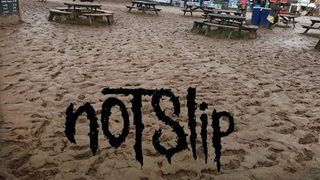 The UK's biggest rock festival Download attracts punters from all over the globe. With a line-up that includes Smashing Pumpkins, Def Leppard, Anthrax, Slipknot, Slayer (in their final UK performance EVER) and Tool – who haven't played the country in over a decade – it's easy to see why it's such a BIG deal for British metallers.

However, with all festivals, the weather can be your friend or foe  – sometimes both in the same day if you live in the UK, and sadly this year Download has been the victim of torrential showers, leaving the grounds a sludgy swamp of mud.

That won't stop Downloaders though, and instead of bailing, the hardest of all festival goers (duh, we're metalheads after all!) have turned up, rocked on and taken to the internet to vent their frustrations. Here are some of the best reactions we could find!

#Drownload has already claimed its first victim 😰 RIP 🙏🏻 to this poor soul, press F in the comments to pay respect 💔 pic.twitter.com/1vO3qO1CIoJune 13, 2019

Download 2019 started off wet and muddy but now it’s drying up and the sun is out, even with the awful conditions on Wednesday people still enjoyed themselves #DL2019 #download2019 #drownload pic.twitter.com/EKQpdd5EyJJune 15, 2019

If anyone wants to sponsor me for doing tough mudder at @DownloadFest this weekend holla @ me #drownload #DownloadFestivalJune 13, 2019

We're on "the only car park that's not waterlogged" #drownload #DownloadFestivalJune 13, 2019

Looks like it's going to be another #drownload festival this year pic.twitter.com/YMBHBF2tLQJune 12, 2019