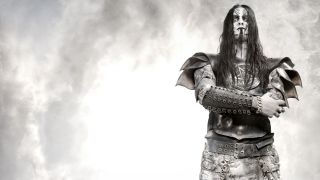 Some black metal bands are about thick, misty atmospheres and otherworldly eeriness. Others are about sulphurous evil and thunderous blasphemy. Others are about frostbitten grimness or misanthropic hate. And a precious few are about doing all of the above, but doing it with some gigantic bloody tunes to boot. When it comes to the earworm variety, Dimmu Borgir remain kings. But, as their debut album turns twenty, it’s well worth remembering there’s a lot more to them than that.

The early incarnation of Dimmu Borgir sounded radically different to what we now think of as their trademark. There were few clean vocals, no grand symphonics, Shagrath was on drums, and the band’s personality was still draped in the hallmarks of black metal’s second wave (Crap production? Check. Tremolo riffs all over the gaff? Check. Sounds like it’s coming from just too far off in the mist to see, but close enough to scare the fuck out of you? Double check.). But, as was typical of those early Norwegian bands, Dimmu Borgir had an approach that was very much their own.

It’s much more heavily disguised nowadays, but on the early recordings – the debut For all tid, and especially the 1996 follow-up Stormblåst – their inherent weird malevolence came through enormously. It’s not really spoken about any more, so used are we to thinking of Dimmu Borgir as the band with the big fuck-off orchestrations, but in their early days, their music was scarier than the prospect of being a popular George RR Martin character. And that didn’t actually end with the significant rise in craft (much of the charm of the early recordings is, you suspect, more to do with talent and good fortune than fully realised skill), ambition and production value that came with Enthrone Darkness Triumphant in 1997 and Spiritual Black Dimensions two years later. It’s still there, there’s just much more going on with it – something that’s remained true for the rest of their career.

The big breaks for Dimmu – the moments where they really spread their wings and flew beyond the traditional black metal audience – came on the next two records, however. A huge line-up change saw guitarist Galder, keyboardist Mustis, former Cradle Of Filth drum masterblaster Nick Barker, and bassist ICS Vortex join, the latter also adding his unique clean vocals as a foil for Shagrath’s visceral shriek. The subsequent albums – 2001’s excellent Puritanical Euphoric Misanthropia and 2003 masterpiece Death Cult Armageddon – made Dimmu Borgir the biggest black metal band in the world.

It’s worth mentioning that their move into even grander symphonic territory did not please everyone. In the days following Emperor and Immortal splitting up, with Jon Nödtveidt and Varg Vikernes in prison and the revolutions sparked by Deathspell Omega, Wolves In The Throne Room, Enslaved and Watain yet to take place, there was a slight drop in the genre’s creative health. In the underground, grindcore, doom and death metal were enjoying revivals, and what the core fanbase of the black stuff wanted filling the yawning chasm left by the second wave’s retreat was not accessibility. But without Dimmu, it’s arguable none of the genre’s recovery would have happened.

The charisma and class of Dimmu Borgir brought black metal to an audience that would never have discovered the genre without them. A generation of kids discovered Mayhem and Darkthrone, Burzum and Satyricon because Progenies Of The Great Apocalypse is a fucking huge tune, and you can get into it as a complete novice. For all their brilliance, you can’t say that about Inno A Satana or Freezing Moon. Half the young bands that make modern black metal stronger than it has ever been probably discovered the genre through Dimmu Borgir going sonically massive. Half of those bands’ audiences wouldn’t give a shit about the style without Shagrath and Silenoz. And that’s without even mentioning the legion of Dimmu clones knocking around the underground, or the staggering advances in orchestration and recording of symphonic metal Death Cult Armageddon pioneered. And through it all, Dimmu Borgir’s brilliant oddness never left, even on the highly polished recent material.

The band themselves have subtly shifted with the line-up changes in recent years (Nick Barker was briefly replaced on the kit by Mayhem’s Hellhammer for 2007’s more guitar-driven In Sorte Diaboli, before ICS Vortex and Mustis left, the rhythm section and keyboards now being handled by live-only players), but the core principles are the same. An underlying eeriness overlain by fiery riffs, evil pomp and melody are the base, with Shagrath sounding convincingly demonic to articulate it all. The most recent album – 2010’s Abrahadabra – remains chock full of tuneage and continues to be ripped off ad nauseam. Small wonder the band still prove to be one of black metal’s big live draws.

What Dimmu Borgir do next should be fascinating; the landscape of black metal is radically different to their last record, and they are likely to find their place in it is rather different. But you’d put money right now on Dimmu Borgir still having bigger hooks than anyone else – and still sounding downright fucking spooky, if you listen closely.

Progenies Of The Great Apocalypse

Arguably the closest thing black metal’s ever had to a genuine hit, this one went big, even being used in the trailer for the movie Hellboy. The sharp-eared amongst you may even spot guest vocals from Abbath Doom Occulta, of Immortal fame.

**Kings Of The Carnival Creation **

One of the enduring classics from Puritanical Euphoric Misanthropia, seen here playing live with the incarnation that recorded the album. And yes, those blastbeats actually are that fast.

One of Dimmu’s more guitar-driven numbers from In Sorte Diaboli came complete with an accompanying horde of the undead rising from the ground, as well as lots of swords being waved around in anger. Metal as.

Right back at the opposite end of the symphonic spectrum, the lead single from Abrahadabra was accompanied by big white fur coats, a big tentacled helmet, a bath of blood with a heart in it, and Djerv’s Agnete Kjølsrud providing eerie guest vocals.

When Dimmu Borgir played a show in their hometown of Oslo with the Norwegian Radio Orchestra, long-time collaborator Gaute Storaas reorchestrated this fan favourite – traditionally the song that closes live sets – for this spectacular performance.