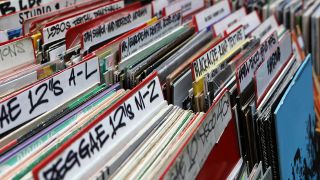 What happened to the album in the 2010s can be summed up in one word: Spotify. Yes, other streaming services are available and Apple Music is proving a formidable competitor, but nothing shaped the decade and reshaped the album quite like Spotify.

There were a lot of hysterical headlines in that time proclaiming the album was “dead” and that streaming services held the knives, but the staggering sales of Ed Sheeran, Taylor Swift, Adele and The Greatest Showman suggested that things were not quite so straightforward or as clear cut.

Let’s rewind to the start of the decade to see where things were for the album. According to BPI numbers, the single as a physical object was pretty much in the grave with 98.7% of UK single sales being downloads. Against this, the album was in relatively rude health, with 82.2% of album sales that year being on CD. Side note: just 0.1% of album sales then were vinyl.

Even so, rock – whatever way you slice its musicological classification – seemed impervious to the vagaries of the market a decade ago.

By 2019, things are very different. Midway through the decade – March 2015, to be precise – streaming was added to the album charts and that changed everything. What is significant here is that the UK chart, always based on “ownership” (be that an LP, cassette, CD or download) since its creation in 1952, now had to contort to accommodate “access” (i.e. streaming). So it makes comparing the state of albums in 2010 and 2019 pretty much impossible, as there is no direct like-for-like.

The Official Charts Company came up with a new metric for measuring albums in the streaming age – what they call the “streaming equivalent album”. It is a hugely complicated piece of digital quantification, but in brief it means that the streams across the tracks that make up an album are divided by 1,000 and that then is treated as the equivalent of a “sale” (i.e. akin to someone buying the album on CD or LP). It doesn’t have to include streams of every track on that album – just the average across all of them; but there is also further complexity to this. Here is the OCC’s definition. “The 2 album tracks attracting most streams are neutralised to the level of the average of the next 10 highest streamed tracks associated with the album (or all tracks where album has < 12 tracks).” So thankfully that’s cleared that up, right?

In short, an “album” for chart purposes is being contorted into whole new shapes that, to the layperson, seem to defy the laws of geometry – like putting Escher in charge of Top Of The Pops. But this is where we are.

So in 2018, the last full year of UK sales the BPI has published, the album market was 25.4% physical and 63.6% streaming (using its “streaming equivalent album” jiggery-pokery), with the remainder coming from downloads. So, really, it’s hard to draw precisely from this if the album is clinging on, is dying or has advanced rigor mortis.

What we do know is that the vinyl LP as a format is growing. In 2010, just 0.2m albums were sold on vinyl in the UK and made up a neatly symmetrical 0.2% of the album market while last year 4.3m LPs were sold and made up 8.9% of all album “sales”.

The album, you might think, is saved. Except, well, it’s more complicated than that.

In 2018, the biggest selling album in the UK on vinyl was Arctic Monkeys’ Tranquility Base Hotel & Casino followed by The Greatest Showman soundtrack. Then it was followed in order by Fleetwood Mac’s Rumours, Queen’s Greatest Hits, Pink Floyd’s Dark Side Of The Moon, George Ezra’s Staying At Tamara’s, Nirvana’s Nevermind, Oasis’s (What’s The Story) Morning Glory?, David Bowie’s Legacy and Amy Winehouse’s Back To Black.

So last year, only three of the biggest vinyl albums of 2018 were actually from 2018 (or very late 2017 in the case of The Greatest Showman) and half of them were from the last millennium.

The vinyl market might tilt towards rock, but it tilts even further towards nostalgia.

Asking if the album is still alive in 2019 is like looking at your reflection in a series of fairground mirrors: depending on where you stand, you’ll either look stretched or shrunken.

The fate of the album, for the most part, is now at the mercy of streaming algorithms. Streaming encourages omnivorous listening rather than feasting on one thing – the audio equivalent of endless tapas as opposed to a giant bowl of mash. Spotify and Apple Music do not care if you listen to a whole album or not – just as long as you listen on their service. The great sleight of hand streaming services have achieved is in engendering loyalty to the platform rather than to the artist or even the music. More of which below.

If the album is at risk of becoming collateral damage because of streaming, so too is music criticism in the traditional sense. Because streaming services are now music discovery, music playback and music editorial all in one place, they are creating a hermetically sealed world where they (and their algorithms) increasingly become the curators and gatekeepers of new music. The critic as a cheerleader for the album as a cultural and artistic statement is becoming sidelined as these services push listeners to consume in the way that works best for the streaming services – and that means coercing users to build up playlists which, like Velco, are designed to hold the user within Streaming Service X and preventing them from defecting to Streaming Service Y or Z.

If the 2000s, following Napster and into iTunes, were about the digital unbundling of the album with a focus on the track then the 2010s were about the album getting dissolved by the playlist. That can be the curated ones like New Music Friday, or any of the mood-based playlists (designed for activities like sleep, studying and workouts) or the “algo-personal” like Release Radar or Discovery Weekly that tweaks recommendations based on your listening history.

Within this, songs (not albums) are being crafted to surf the recommendation algorithms as much as possible and therefore stand the best chance of being placed in key playlists – what New York Times music critic Jon Caramanica sniffily coined “Spotifycore”. This means, at the top end at least, acts and labels looking for traction on streaming services are complicit in the streaming services’ push towards the song rather than the album. But while this might currently be the biggest centre of gravity in streaming, it’s not the only centre of gravity for music.

In short, too much attention has been placed on the mainstream of streaming and it is presumed that what happens there happens everywhere else. Rather, we need to think of music consumption in terms of occasionally overlapping rings which all have their own ecosystems and their own codes of behaviour.

Rock fans, more than the fans of any other genre, still cleave to the idea of the album. And rock acts still hold tight to the importance of the album in both commercial and creative terms. So looking at what happens, say, to Dua Lipa in the streaming world only tells you so much about Dua Lipa and her pop peers and tells you very little about other acts outside of that world.

One needs only look at how rock and alternative acts have embraced D2C (direct-to-consumer) as an important survival tactic. This means when an act has a new album out, they will push a fan towards buying bundles (like the album + T-shirt + early access to gig tickets) and, because they are emphasising the physical version of the album, this all counts towards the charts (as long as they stay within the chart rules on how these bundles are created and sold).

This is seen at its apex in the in-store tour on week of release, where you have to buy a copy of the album to be in with a chance of seeing a band play at Rough Trade East or Fopp. And a week of these gigs, to a few hundred people per show, can result in a few thousand album sales that make all the difference between an album scraping into the top 40 and an album going top 20 or higher.

But there are other things that rock acts can do to keep the album central to what they do, and look to other genres for their lead, as interestingly, the most revolutionary things around the album are happening in R&B – a genre that was a third of the size of rock in album terms at the start of the decade. Beyoncé, with her self-titled album in 2013 and again with Lemonade in 2016, benefitted from both the “surprise drop” and the “visual album”, making her two albums genuine events in a way that the industry had not seen since Radiohead’s In Rainbows in 2007. These were cultural talking points in a way that singles rarely are.

Then there’s Kanye West with The Life Of Pablo, an “album” that shifted shape as tracks were added or removed seemingly at will. Or there’s both Drake and Chance The Rapper who have created what they prefer to see as mixtapes rather than albums in the purest sense. For a genre where arguably the single was more important than the album, there has been a lot of interesting things done with the album in the age of the streaming single that rock acts could do well to learn from.

Albums can become an event in terms of both the format (the visual album, the two-part album as Foals and The 1975 have done recently) and the release strategy (the surprise drop). But the future of the album will depend on acts magicking up a new type of creative focus as well as a new form of fan excitement.

What no one wants to happen is to over-venerate the album and treat it to as a museum piece – a dusty echo of the past rather than a signpost to the future. Inertia paves the road to obsolescence.

But something else – something much bigger – is afoot and will define the next decade. If the album had to fight for its survival in the 2010s against the rise of the single (like a digital re-run of the 1950s or a format version of Logan’s Run), both will have to battle the rise of the podcast. Spotify in particular regards podcasts as key to its future and has invested hundreds of millions of dollars recently buying up podcasting companies like Anchor and Gimlet and ploughed millions more into making its own, like the recent documentary series Stay Free: The Story Of The Clash. Apple Music, Deezer and others are also all convinced this is the way the wind is blowing. And as they all chase these promises, music’s existential crisis becomes louder by the hour.

Despite the chest-beating headlines, the album was not quite put to the sword in the 2010s by the playlist. But the biggest threat for all music, be it singles or albums, is the steady march of the “podlist”, where music has to slug it out for attention against short-form podcasts that start to work like singles. This could all go nuclear in the 2020s, making the album-versus-playlist tussle of the last decade look like a benign game of conkers.