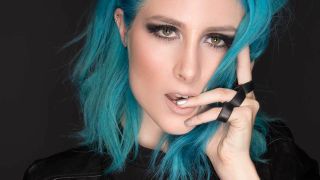 “I think especially in today’s social climate, it’s both important and powerful to be able to tell the world ‘I’ve had enough, I’m pissed off, and it’s time for change.’”

Since moving to Los Angeles from Boston as a teenager, Diamante has been making a big noise. With a series of feisty, well-received singles (Bite Your Kiss and Coming In Hot have both had over a million views on YouTube) and 2015’s Dirty Blonde EP behind her, 2018 will see the release of Diamante’s debut full-length album. And the first fruit to emerge from the sessions is the anthemic Had Enough, a perfectly timed cover of a song originally released by English alt-rockers Lower Than Atlantis in 2016.

“I was a huge fan of the song the moment I heard it,” says Diamante. “I was taken aback in the best way possible by how honest the lyrics were, that level of honesty is always something I strive for in my own music.”

Had Enough is accompanied by a video that tips its hat heavily in the direction of the 1981 road movie Thelma And Louise, including a scene in which a sex-pest gets his comeuppance. The footage was shot using an all-female crew.

Why was it important to film the video with an all-female crew?

I really wanted to showcase the talented women behind the video as a collaborative effort because I have experienced the underrepresentation of women on crews in the past. I also knew that an all-female crew would best express my interpretation and relationship with the song Had Enough.

You went on the Womens’ March in LA. What did you learn?

I was really moved and inspired by the amount of people there all fighting for social change. I saw women of all ages and races united, men marching with their daughters, sexual assault survivors telling their stories, and just an overall empowerment of countless groups of people. Sometimes we tend to think of social change as a daunting task because we are just one person, but seeing all the people together that day made me realise that implementing social change really is possible.

I don’t believe so. Their music is purposely provocative and bold, and during my time with them on the road they were very respectful and all-round great musicians and great guys. I saw a lot of women at the shows having a blast and being completely care-free because they were there for the love of 80’s rock’n’roll.

What can people expect from your debut album?

They can expect an album of hard-hitting rock! The album definitely has an 80’s influence, and the songs themselves are an insight and deeper look into who I am and what I feel on a continuous basis. There are many strong moments, but I also chose to be vulnerable with this music because I’ve learned embracing vulnerability is the strongest thing someone can do. My producer, Howard Benson, was instrumental in pushing me to be more fearless lyrically.

Diamante’s debut album will be released through Better Noise Records later this year.