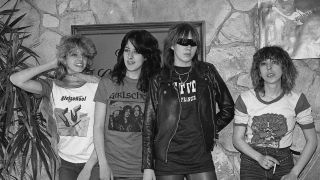 “Can you believe I have never done a gig with Girlschool? That’s just insane!”

The former Runaways star has no doubt why Girlschool have made such a huge impact over four decades.

“They have so much street cred. This band is for real. There’s nothing fake about them. A lot of female bands just worry about their image, looking pretty and wearing lots of lipstick. Girlschool don’t care about that. They just get out there and rock their asses off!”

Now all we need is to see Ford and Girlschool on the same live bill for the first time.

“My god, I would love that. Somebody make it happen!”

“I know they have so many great songs, but this is my favourite. It grabs you by the throat and shakes you up. There’s so much steel in this song. And it has a badass attitude. How many men could rock with such balls?! Whenever I hear this, it reminds me that Girlschool are a helluva band. Few others can hope to rock as hard.”

“Man, they take The Sweet song and really own it. I love the video as well, because the girls look so natural in it. That’s part of their appeal. They always come across as themselves on every song, whether it’s one of their own, or a cover.”

“Another cool cover, this time of the T. Rex classic. I love the way this runs along, and Girlschool give it their own edge. Wow, just tremendous. This is a fun performance. You almost forget about the original. That takes some doing.”

“When I first went solo I also had a song called Hit And Run. That was on my Dancin’ On The Edge album. But Girlschool had it first, even though I hadn’t heard it at the time. The way they deliver here is just so dirty, and Kelly Johnson… what a great guitarist! She can match any male ones you mention.”

“Wow, this has lots of energy and attitude. You can smell and feel the badass mentality that runs right through this. This has a lot of power as well as melody, and that’s why it makes such an impact. I never tire of it. Play it loud!”

“Now, here is a song with balls. It tells you right to your face that you had better not mess with me, or get in my way, otherwise I’ll deal with you. And you know they mean it. These are not merely words sung just for effect, they represent the band and who they are. Nothing false in these sentiments. They are delivered straight from the fist to the groin!”

“When you listen to this, you understand why Kelly should be regarded as being such a fine guitarist. She gets right in your face with her talent. I just wish I would have had the opportunity to play with here even once. Sadly, it’s too late now. What a loss she has been as a musician and as a person.”

“This is just a killer anthem. And when you hear what they did on this song, you can definitely detect the Motörhead influence. It’s all over the track, and in fact is across so much Girlschool have done. They obviously took a lot from Lemmy, but didn’t stuck at merely copying what he and his band did, they adapted it for themselves. Female Motörhead? They’re pure Girlschool before anything else.”

“Now, here is an example of what the band stand for. You just do not want to fuck with them, because they are going down their own path. Never try to tell them what to do, otherwise you are gonna be more than ignored. ‘Fuck you, asshole’ is what they’re telling you and that mirrors my own attitude. These girls are not prepared just to look pretty for the boys. They are gonna do everything in their own way. You’ve just gotta love it!”

“When I first heard this, I had no idea it was a cover (this was first done by The Gun). But it doesn’t matter. Girlschool have you hooked as soon as that great opening riff kicks in. I have a song called Devil In My Head (on the album Living Like A Runaway), and that has the same vibe as this song. Kelly kicks ass here, and takes it all to such a high level. People never talk about how good Girlschool are as musicians, but on this song you know they are formidable.”