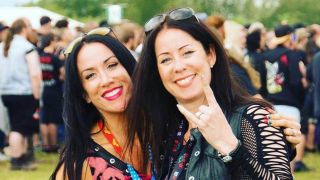 “We tell bands: you’re not allowed to bring real blood to the festival,” says Vicky Hungerford, who books Bloodstock, the annual metal shindig in Derbyshire. She’s contemplating the particular problems that can arise when you add black metal bands to your bill. “You’re not allowed to sacrifice animals or bring carcasses. We have to say that. Watain turned up to the festival with a dead pig, with organs or blood, which they were told they cannot use for health safety reasons. They ignored it, and the next thing you know there’s pig blood all over the stage. It all has to be disinfected. Then they defecate on each other before they go on stage. It’s part of a ritual. It’s like a contest to show how evil they are. But then you’ve got Behemoth, who are so level headed, and Nergal’s asking if I’ve got any strawberry jam he can use to replicate blood.”

When Hungerford talks about the problems she has faced in the music industry, those are the kinds of issues she wants to talk about. Pig’s intestines. Or the veteran metal star so up himself he demanded an extra £5,000 10 minutes before he was due on stage, the one who also demanded he not be looked at, so had to be taken to the stage with a towel over his head and screens on either side. “He was vile. When he got offstage, I said to the crew: ‘He can sod off and he’s not welcome back.’”

What she’s less keen to ponder is whether being a woman has caused people to react to her in ways they wouldn’t were she not female. “What frustrates me is the people who say, ‘You must have found it really difficult being a woman.’ And I’ve never looked at it like that. I’ve only ever been a woman! I’ve never looked at myself in any other way. Would having a penis make the job easier? I can’t say it would.” She says there are some older booking agents – the people she has to negotiate with to secure bands for Bloodstock – who came into music 40 or more years ago who “struggle with women in the industry”, but that’s as far as she goes. “It doesn’t even cross my mind,” she says, firmly.

One doesn’t have to rely solely on anecdotal evidence, either. In the UK music industry, only 30% of senior executive roles are held by women, according to a study by the industry body UK Music. And while women make up more than half the music industry workforce between the ages of 25 to 34, that drops to just a third of those between 45 and 64. It’s possible that reflects the changing face of the industry, and that in 10 or 20 years’ time, there will be many more women in the upper age range; it’s also possible that it reflects women taking career breaks to have children. But still, as Tara Richardson of Q Prime management told the Guardian last year: “I’m embarrassed to be in an industry with those statistics.”

Sexual harassment remains an issue, too. Early in 2016, a series of tweets by Amber Coffman of the band Dirty Projectors about the behaviour of the American publicist Heathcliff Beru led to scores of women in the music industry coming forward to complain they had suffered similar experiences, some at the hands of Beru, many from other men.

Nevertheless, times have changed. Sharon Osbourne – in her autobiography, Extreme – said that when she started managing Ozzy Osbourne, “the music business was a boys’ club … fuelled by cocaine and sexual favours. These were the days of payola and Mafia involvement, and the standard currency, if you were a woman, was a blow job, but men soon learned that Sharon Osbourne was more likely to kick them in the balls than suck their dick.” It’s not that brutal anymore, even if cocaine is still hardly in short supply in the music business.

Emma Banks is one of the UK’s most powerful agents – she doesn’t care for the term “booking agent” because, she says, her job encompasses far more than booking shows. She works for the mega agency CAA, where her clients include Red Hot Chili Peppers. “I don’t think there were any female agents in the UK when I started,” she says. “But music has moved with the times as every industry has. If you want to look for prejudice you will find it; there will always be someone who says or do something. And you should call them out, but not to the extent of being a moaning minnie. If you are being harassed that must be horrendous, but I was lucky. I haven’t encountered huge issues, but that doesn’t mean others haven’t.”

What’s more common, perhaps, is a certain low-grade disdain for women from some men who feel they don’t deserve their success. Emily Bragg, for example, is an in-demand tour manager (“At this point, I feel I’m interviewing managements, rather than them interviewing me,” she says of choosing which jobs to take), who spends up to 250 nights a year on the road, looking after the logistical arrangements of bands including Alabama Shakes. “I’ve had a couple of old-school tour managers give me the cold shoulder at festivals, when I asked production questions. Recently, on email I was trying to book a semi truck, and on this big email chain, in front of everyone, a man felt the need to explain to me what a piece of radio terminology meant. I knew. I replied: ‘10-4.’” And Bragg, too, has had the experience of walking into a gig and having to prove her authority. “When I come into a venue sometimes people don’t assume I’m the TM because I’m a woman. We have a male production manager with the Shakes and many times the promoter will go to them first. Our production manager loves to say: ‘I don’t really know, but here’s Emily. She’s the tour manager.’”

“My favourite story is one where people were trying to sign Tame Impala for their publishing and we had a few different meeting,” Regan says. “In one of them, a male senior person in the company said,’“Look at you, you look like you could be their backup singer.’ Holy shit. Imagine saying that to a band manager when you’re trying to impress them. Go fuck yourself. We turned around and walked out - we were obviously not signing with those people. As if I could work with that person! It was so insulting.”

These days, according to both Bragg and Barbara Charone – the legendary publicist whose clients include Keith Richards, REM and Madonna – there are times when artists actively prefer working with women. Though in both instances, it’s worth looking at why. Bragg says she has heard artists assuming women TMs have a maternal instinct towards their charges, “and I don’t think it’s right to assume that”. Charone says some artists prefer talking to female writers: “A good-looking journalist comes into the room and it’s better than an unattractive guy. It certainly livens things up.” Both examples might see a woman getting a break; neither are based on the assumption that the woman is just as capable as a man.

The five women who spoke to Classic Rock for this piece all share something: a certain steely determination to get where they are today. Charone began writing for the Chicago Sun-Times when she was in high school, then came to England and carved out a career in the music press before turning from poacher to gamekeeper as a publicist. Banks became involved in staging gigs almost by accident, as part of the Rag society at university, raising money for charity, and then spent a year writing letters begging for jobs before being taken on – and now works in a 24⁄7 business. Bragg worked at the Bonnaroo festival in Tennessee, doing catering, and used the opportunity of encountering industry figures “three times a day” to secure the chance to work with artists. Regan was managing a pub in Fremantle, Australia, and putting on bands there, when she realised she had more or less become a band manager. And for some time she had to manage both bands and pub, until it became apparent Tame Impala needed her full-time attention. Even then, she says, “I couldn’t quite financially sustain myself. I just had to cut ties with the pub and hope for the best.”

All, though, insist determination and inner strength aren’t things only a woman needs to work in the music industry. They are things everyone needs. “When I started,” Bragg says, “the manager I worked with said I was going to be eaten alive out there. I said, ‘This is the 2000s.’ You have to have thick skin, but that’s the business, not being a woman.” And you have to be able to deal with the knockbacks, even when you’re an industry legend. “The radio pluggers send round emails all the time,” Charone says of record labels. “And the reaction is: ‘Fantastic! You got the Radio 2 playlist!’ We have all these magazine covers and no one says a fucking word.”

It’s stressful, too. Whatever your job in the music industry, at some point someone is going to hold you responsible for some catastrophe. “Years and years ago,” Vicky Hungerford says, “an agent sent me a scathing email to say: ‘Your festival is shit, the Happy Shopper of festivals, and just remember I said this.’ I cried my eyes out all night over that. I framed it and have it in my office now, and if anything it spurred me on to prove him wrong.”

All of them talk about the pressures of being constantly on call, of being called in to sort out problems that aren’t of their making, of the stresses of fighting fires. But all also talk of the incredible reward of helping an artist grow from an unknown to a star, and the magical nights along the way. Emma Banks, for example, is almost sighing with pleasure as she remembers working with Jeff Buckley and the night in March 1994 she booked him into two shows. “He was playing at Bunjies [in central London], which held 50 people. But the buzz was so big and there were so many people outside that I walked up the road to another club, which was empty apart from a couple of blokes up the bar. I said, ‘If I bring in an act in a couple of hours, can you put him on?’ They seemed a bit surprised, but said OK. I got back to Bunjie’s and passed a note up to Jeff onstage telling him what I’d done. So when he finished at Bunjie’s we walked up the street, with everyone following, and played at another show at The Forge [which became the 12 Bar Club]. That was incredibly special.”

That, in a nutshell, is why these women work in music.