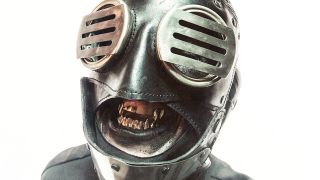 With Slipknot's sixth album loitering tantalisingly on the horizon, we take a look back at the time we went inside the mind of hyperactive DJ Sid Wilson...

WHAT’S THE CRAZIEST THING YOU’VE EVER DONE ON STAGE?

“There’s been a lot of crazy balcony jumps. We’ve played in a lot of old theatres and they have those opera-style balconies. I go up there and think, ‘Man, that’d look fucking great!’ I climb up the backstairs and scope it out before the show. People are generally five-and-a-half feet tall, then they put their arms in the air, and that’s another couple of feet, so you can subtract that from your fall. Then you get out there and think, ‘Oh shit…’”

AND WHAT ARE THE WORST INJURIES YOU’VE INCURRED?

“The worst injury was when I broke both my heels, jumping off a ramp at the back of the stage. I was jumping over Paul, and I just landed wrong.”

MAN, THAT MUST HAVE HURT

“I didn’t have the right kind of shoes on… although I did all of the Volume 3 tour in dress shoes and white socks, paying homage to Michael Jackson! When I was younger I had a high metabolism, young energy, on fire all the time… ‘I’m a fucking berserker!’ you know? Ha ha! I kept that up for years.”

DIDN’T YOU THEN DO SHOWS IN A WHEELCHAIR?

“Yeah, and it was cool because I’d practised it before. I broke my leg in a motorcycle accident when I was younger. I’ve done full DJ sets in a wheelchair! This time I was so mad at myself, I had to do something besides just doing my parts, so I started crawling out of the wheelchair and dragging my body across the stage, leaving my legs behind me, limp.”

WE BET THAT LOOKED… INTERESTING

“A lot of people thought it was an act! It was all real. I was in pain every day. I’d take the wheelchair down and roll it under Clown’s drumkit and hang off it with two broken feet. Superhero status, right? I’m fucking Wolverine!”

“When I was in high school, cocaine was my least favourite. Other things lasted longer and were more powerful, so I thought it was a waste. I was a horrible fucking kid! By the time I was out of high school I’d learned how to be an out-of-control, lunatic rockstar. I got that out of the way early, thank god!”

WOULD YOU SAY YOUR ATTITUDE TOWARDS DRUGS HAS CHANGED A LOT OVER THE YEARS?

“Now I pretty much hate all drugs, just because I know what they can do to your body and the lasting effects of some of them. I can’t stand cocaine or heroin or anything like that, because Paul’s fucking dead because of it. That’s the harsh truth. One of my best friends in the fucking world is dead and it’s all because of some bullshit fuckin’ powder. So fuck drugs. Smoke a joint, have a pint of beer, but some of that shit is definitely not worth it. And people know what to stay away from. Just use your fucking brain.”

WHAT’S THE STRANGEST PLACE YOU’VE EVER PLAYED A DJ SET IN?

“I DJ’d in a strip bar before. I got hired to play at party and they didn’t tell me anything about it, so I thought it was just a club. I played the set and there were people on the dancefloor, but in the background you could see the strippers on the poles.”

“That was kinda weird. I’ve played in all kinds of weird basements and illegal warehouse parties in Chicago. I’d drive there almost every weekend. I’d sit outside the coffee house in Des Moines with my hat, begging for change, and I’d say, ‘Hey, I need to get to Chicago for a party, to watch some DJs play and get fucked up!’ and I’d say that over and over until I had enough money in the hat!”/o:p

WHAT’S THE MOST EXTRAVAGANT THING YOU’VE EVER BOUGHT?

“What isn’t ridiculous that I buy? Ha ha ha! Let’s be honest, you just have to look at my fucking clothes to figure that one out! I got some pants in Japan and they’re big, baggy pants, almost like MC Hammer pants, and one leg is shorter than the other… they did that on purpose and it’s completely fucking ridiculous.

That’s my thing. I’m all for people buying ridiculous shit. I have an obnoxious, ignorant car! You have got to make it fun. If it’s fun to you, who cares what other people think? You see some weird-ass, crazy hat? Buy that shit and put it on. And if someone doesn’t like it? Fuck ’em.”