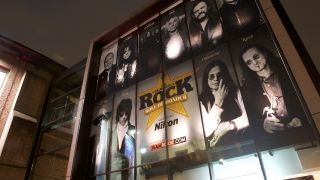 This year’s Classic Rock Roll Of Honour is go. After months of planning and frantic trans-Atlantic phone calls, the tables are set, the red carpet rolled, and there’s a small table to the side of the stage bowing under the weight of gleaming awards. You can follow the action here as it unfolds.

Classic Rock Roll Of Honour brings out the stars

22.51: The Final Countdown! People are on their feet. Spotlights strafe the audience, and Joey Tempest is performing as if to a stadium rather than a gathering of rock royalty in a former railway shed in North London. Magnificent. What a way to finish. A final skywards thrust of the mic stand into the air, and we’re done.

See you next year in Tokyo.

22.39. Europe are onstage. I think it’s fair to say that there’s a fair amount of anticipation in the room when it comes to that song.

22.32. We Will Rock You plays as Brian May strides to the stage. Another ovation. He’s says he’s thrilled to be picking up the award from Joe Satriani, and he looks absolutely delighted. He name-checks Jimmy Page, and Jimi Hendrix, and congratulates all the other winners. And he thanks Classic Rock. Thanks Brian!

And that concludes the awards section of our show. Just one more band to go.

22.26: onstage to present the Living Legend Award is Joe Satriani. He describes the recipients as delivering more what-the-fuck moments than anyone is rock. Who can it be? You know the answer.

22.17. Nils Lofgren is onstage. Nils Lofgren! He’s still wearing that hat, and is telling stories about his journey through rock, being inspired by seeing The Who and Hendrix, then ending up supporting Hendrix. Huge round of applause as he departs.

22.09: Noddy Holder. The audience rises as one. The first thing he says? “BASTARD!” What a man. A genuine legend, and a true showman. Now he’s telling a story about driving a van.

22.05: next up, The Showman award, presented by comedian Phil Jupitus. He seems confused, talking about calypso b-sides. I’m not sure he’s at the right event.

21.56: Alice Cooper is onstage to accept his award, telling stories of playing with Led Zeppelin. Next up, the VIP award, presented by The Who’s manager Bill Curbishly.

21.52: Jimi’s sister Janie is onstage to accept the award from Lemmy. “Legends will never die, because rock music will live on forever,” she says.

21.45: Joe Satriani is onstage. Another ovation as he walks up.

21.43: Europe are onstage to accept their award. Tonight is a “very special night”, they say.

21.36: Jimmy Page is coming up to accept his award. Standing ovation as Kashmir plays. Extraordinary.

21.32: Prog Magazine editor Jerry Ewing accepts the award on behalf of AC/DC. He’s telling the story of seeing the band as a ten-tear-old in Sydney. This year, he saw his 50th show from the band.

21.29: Bruce Dickinson is onstage to accept the award. He thanks the fans, for this one was was publicly voted. Next up, it’s Band Of The Year.

21.26: We Are Harlot are onstage accepting their award. They thank Rush, Aerosmith, Motorhead, Alice Cooper and Van Halen. Next up, album of the year.

21.13: The podium has arrived. It’s gleaming like a titanium dalek. And we’re almost ready to award trophies to some true greats.

21.00: Next up, it’s the awards proper. Roadies scuttle about removing equipment, and we’re expecting some kind of podium to arrive. You could cut the tension with even the flimsiest of blades.

20.50: It’s Blackberry Smoke. Fresh from playing at The Forum on Sunday evening, they’ve moved the short distance across North London to The Roundhouse. Charlie Starr is wearing a magnificent hat.

20.45: it looks like the great and the good are onto the dessert stage of the menu, and things seem be happening. Jimmy Page is wandering round the room, shaking hands and talking to people. And directly below us, there’s a band waiting to go onstage.

20.18: we’ve got our hands on a copy of the menu, which we’re salivating over while waiting for our pizza to show.

Starter: Cured salmon, watercress velouté, lemon curd and crispy leeks. We imagine that the latter will be the choice of Classic Rock’s editor, who is extremely Welsh.

19.55: while everyone’s enjoying their meals, we should probably tell you that you’ll be able to listen to the Classic Rock Radio Show broadcasting LIVE from the awards at 9pm. You can either listen online via the fancy player at the foot of the page, or via the TeamRock Radio App, or via TuneIn. Your host will be radio legend Nicky Horne. We spotted him limbering up earlier, and you’ve never seen a man look so ready.

19.31: Everyone’s eating now, so there may well be a lull in coverage. There’s still no sign of our pizza.

19.19: Yoshiki from X Japan has just taken to the stage. He’s playing Bohemian Rhapsody on the piano… with a string quartet! It’s a cliche, but you can literally hear a pin drop.

19.17: TeamRock Editor-in-Chief Alexander Milas has just announced that next year’s Roll Of Honour show will take place in Tokyo. Tokyo!

19.12: Classic Rock editor Siân Llewellyn is onstage, introducing the show. She’s talking about what Classic Rock has become: not just a magazine, but a website, an app, a radio show. And, for one night only, a slap-up meal and some hard-won awards.

19.00: Wasn’t expecting this. There’s a New Orleans-style jazz band winding its way between the tables, leading everyone to their seats. Trumpets. Tubas. Drums that rattle. This is nuts. It’s like a climax, and yet we’ve barely finished the foreplay.

18.48: Nils Lofgren is stalking the carpet. He’s wearing a frankly amazing hat. We’ll try and ask him where he got it from.

18:45. Brian May. Alice Cooper. They’re next to each other on the red carpet. This might well be historic.

18.43: You turn your back for a moment, and the red carpet fills up with the great and good of rock’n’roll. Thunder have arrived. Bill Odie. Bill Odie! The evening’s host, Chris Jericho. Cleo Rocos. Cleo Rocos! Dan Patlansky. Ginger Wildheart. Steve Hogarth. And there’s a car in the middle of the dining room. A Ford Mustang! You don’t get that at the Oscars.

18.28: does anyone have a number for a pizza delivery company?

18.18: Yoshiki from X Japan is here. Jimmy Page is here. We Are Harlot are here. Top scientist Matt Taylor is here. And someone is eating pizza. The smell is everywhere. I’m starving.

18.11: OK, this is a big deal. Jimi Hendrix’s sister has arrived, having flown in from Seattle.

18.09: Europe are here (the band, not the continent), are they look swell. They’re closing the show. I wonder what they’ll finish with?

17.48: Blackberry Smoke have just shown up. They’re playing, which means they’re not attired in tuxedos, but they’re the very definition of sharp-dressed men. Stetsons. Shades. Style.

17.33: The Red Carpet action has just begun. Rick Wakeman’s already through the door, as is Wilko Johnson. This is a strong start.

5 Historic Gigs That Shook The Roundhouse