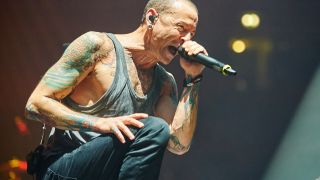 Having swooped into the UK to play a short tour in support of their Hunting Party album, Linkin Park’s Chester Bennington reveals all.

“I don’t want to sound like I had the worst life in the world but growing up wasn’t a whole lot of fun. It was very scary and very lonely.

“I started getting molested when I was about seven or eight. It was by a friend who was a few years older than me. It escalated from a touchy, curious, ‘what does this thing do’ into full-on, crazy violations. I was getting beaten up and being forced to do things I didn’t want to do. It destroyed my self-confidence. Like most people, I was too afraid to say anything. I didn’t want people to think I was gay or that I was lying. It was a horrible experience.

“Then my parents got divorced when I was 11. When my mom left, my whole family pretty much disappeared. My older brother left home, my older sister left home. My other sister, who’s a little older than me, was hardly ever there. That left me and my dad, and he was working around the clock pulling double shifts. I was pretty much just left at home by myself. It was horrible.

“The sexual assaults kept happening until I was about 13. When I wasn’t at home, I was at this family friend’s home and that was where the stuff was happening to me. The only thing I wanted to do was kill everybody and run away. I hated everybody in my family: I felt abandoned by my mom, my dad was not emotionally very stable then, and there was no-one I could turn to – at least that’s how my young mind felt.

“I was very creative, I wrote a lot, I drew a lot and I wrote a lot of poetry. Actually I used to write poetry in the form of songs – with verses, pre-choruses and choruses. That was even before I was in a band. The more I wrote, the more I realised I was trying to make sense of my feelings. Around 14 was when I got into my first band. When I was 15, I got into my first real band.”

The beginning of addiction

“I started getting some confidence back [in my band] and that meant I could get away from a lot of the trouble and abuse I was getting into. But, because of the need to escape those things, I fell into the abuse of drugs and alcohol. That was great, for a while. Getting high, drinking a lot and having sex with a lot of great girls – the whole rock ‘n’ roll thing worked for a very long time.

“I’ve done everything. I got really, really bad. When I was 13 to 16, I was doing a ton of LSD and a lot of drinking. Then, when we couldn’t find acid, we turned to speed. Coke was too expensive and lame. Speed was cheap and it worked really, really well. I got really bad, really quickly.

“I moved in with my mom when I was 17 or 18 and I was probably about 115 pounds. [8.5 stone]. She freaked out. She wouldn’t let me leave the house. I was doing speed every day and I was going a lot of it. On a normal day, my friends and I would go through a 16th to an eight-ball. We were smoking it in bongs – I was doing bong-hits of meth. It was ridiculous. Then we’d smoke opium to come down, or we’d take pills, or I’d drink so much that I’d shit my pants. It was not pretty.

“I knew I had to change my ways. So I decided to stop. I used a lot of marijuana to stop. Instead of getting high on speed, I’d smoke weed. I did that for a very long time and that kept me off the hard drugs.”

“I respect [the band] for getting through that time without killing each other. We didn’t get into stupid nit-picky fights that might jeopardise our career. For me, the hardest part was doing so many shows. We were playing all the time. We went straight from rehearsing and writing into performing every night. Sometimes we were playing six nights a week, then having to drive to shows afterwards. We weren’t eating right, we weren’t sleeping, we weren’t taking care of ourselves. We had no crew, no tour manager and we had to set our own gear up. We were flying by the seats of our pants.

“I was drinking a lot then, I was drinking a ton. I was smoking pot and that segregated me from the rest of the band. At that time, I didn’t feel like I was connected with the guys, we didn’t feel like close friends. Also, my then wife and I were at each other’s throats constantly. It was a pretty miserable experience. I had achieved my lifelong dream and I was still not happy, I wasn’t at peace.

“My drinking put a big barricade between me and the guys in the band but I didn’t realise how big a problem it was – I thought they just didn’t understand me. I think I’m a nice guy – a pretty level-headed, nice, generous person. But apparently that’s not true because a lot of the things I did pushed people away and made them not want to talk to me.

“It wasn’t until 2006, when I had a choice between stopping drinking or dying, that I did some counseling with the guys and they really opened up and told me how they felt. I had no idea that I had been such a nightmare. I knew that I had a drinking problem, a drug problem and that parts of my personal life were crazy but I didn’t realise how much that was affecting the people around me until I got a good dose of ‘Here’s-what-you’re-really-like’.

“It was a shock. They said that I was two people – Chester and then &lt;&lt;that&gt;&gt; fucking guy. I didn’t want to be that guy.”

“I wasn’t leaving my house. I’d shack up in my closet in the dark and shake all day. I’d wake up and have a pint of Jack Daniels to calm down, then I’d pop a bunch of pills and go back in my closet and fucking freak out for the rest of the day. Then I’d go out and party with my friends, pretending I was OK, and then go home. I was a mess. I was falling through windows, having seizures and going to hospital the whole time. It was fucking ridiculous.

“I got divorced and lost all my money in that. I was starting a new relationship too, and it wasn’t pretty. I was trying to make my life better and I’d found someone who I thought could get me there, but I was a total wreck. Eventually I just gave in, and that was it – I had to give up and ask for help. I need help. If I did it on my own, I wouldn’t have made it. Everybody came to my rescue.”

“I could very easily not be the person who’s sitting here right now. I could either be dead or wandering the streets somewhere alone. That was the reality for me. I wanted to kill myself. It was a horrible, horrible existence. I couldn’t function without drinking obscene amounts of alcohol and, after I had drank it, I obviously couldn’t function either./o:p

“I knew there was only so much the guys in Linkin Park were going to put up with. None of those guys really drink. They’re completely normal people; they don’t participate in that kind of stuff. As a result, I was isolated from them a lot. It wasn’t because of them, it was because of me./o:p

“I was lying about my drinking. I was like a teenager again. I’d come home and my wife would go, ‘Have you been drinking?’ I’d go, ‘No!’ She could smell it on my breath and I’d go, ‘That’s impossible because I haven’t been drinking’. I’d be lying to my wife and hating myself both for that and because I got caught./o:p

“The problem was that I was looking at being sober as a punishment. I was looking at it like a three year old looks at you when you take his toys away. I thought of it as something I wanted that I couldn’t have. It wasn’t until 2009 that I made the turn.”

“I don’t like being an alcoholic. It’s my biggest enemy and my Achilles heel. But for the first time in my life I’m not angry I’m an alcoholic. I felt like I was white knuckling through life. I was holding on as hard as I could to try to have some normalcy./o:p

“I feel that, now, I actually have a chance of not using. Before, it would always be in the back of mind: ‘Can I make it through the day without drinking and without lying to everybody?’ That’s a fucking scary place to be. You can’t be alone anywhere. You have to have people that know you around all the time. It’s pretty fucked up./o:p

“I don’t have all the emotional stuff and all the turmoil going all the time anymore. I’ve gotten comfortable with being out of all that stuff. I learned that the reason I used to keep going into all the turmoil was because that’s where I was comfortable. When things got normal, was when I freaked out. Now, though, it’s the opposite.

“I choose to be sober now, I choose not to drink. I have drunk since I started my journey. Thankfully it’s not turned into anything bad. But what it comes down to is that I just don’t want to be that person anymore. I’m a person of faith and I take that very seriously. I pray all the time. That’s something that keeps me in check. If I find myself thinking, ‘I could probably sneak out to a bar tonight’, then I have a voice inside me that goes, ‘No, no, no’. And I trust it, it’s right, so I say thanks for being given that guidance.”