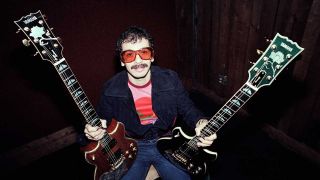 The innovative fusion of rock’n’roll with Latin American music and rhythms pioneered by Santana in the late 60s created a distinctive sound that is as instantly recognisable now as it was back then. At full throttle Santana were an awesome sound and spectacle.

The surging AfroCuban beats that rumbled and rattled from an array of percussionists provided a molten lava flow above which Carlos Santana created his trademark guitar ‘cry’ – a technique by which he could gradually change a single sustained note from a gentle plea to a heartbreaking howl, or vice versa.

But Santana also knew the value of a sweet melody. On songs like Peter Green’s Black Magic Woman or Carlos’s achingly beautiful Samba Pa Ti, the rhythms would be reined in and Carlos’s guitar would shed a different kind of tear. It was these songs that spread the Santana band’s reputation around the world and made them a household name. Not that the band have had an easy ride.

Far from it. Carlos was always a reluctant bandleader, and the inability to maintain a stable line-up continually blighted their career. Carlos himself effectively gave up on the band identity in the late 80s, and is now generally regarded as a solo artist. The original line-up came together in the hippy haze of San Francisco in the mid-60s where Carlos, who was born in Mexico, had grown up.

Their first gig at the Fillmore in 1968 brought about a standing ovation, but it was their show-stopping performance at the Woodstock Festival the following year that showcased their wares to a wider audience (especially when the film came out, which captured the band in mesmerising form playing Soul Sacrifice) and secured them a record contract with Columbia.

For the next four years Santana blazed an iridescent trail across the rock’n’roll skyline, raising the bar with each album, until the band started to fall apart. Carlos’s response was to get in touch with his spiritual side (for a while he added ‘Devadip’ to his name), and for a while the second incarnation of the band continued the upward trajectory.

The new wave found them floundering and out of fashion, but they weathered the storm and were one of the select few Woodstock acts to perform at 1985’s Live Aid.

Over the years Carlos has hitched his signature guitar cry to various styles and collaborations with other artists with varying degrees of success. But while Santana’s flame may have often flickered, it has never been extinguished.

Their second album and still their definitive masterpiece, Abraxas caught the full force of Santana’s style and infused it with the heady spirit of the era.

There are also the complex, jazz-influenced Incident At Neshabur, more percussion pyrotechnics on Se A Cabo, and the sublime instrumental Samba Pa Ti which has become Carlos’ signature tune.View Deal

The result was a more instrumental album where Latin beats merge with jazzier rhythms on a series of tightly controlled jams featuring Carlos, a teenage Neil Schon, and keyboard player Tom Coster. The jams range from trance to funk, culminating in the monumental Every Step Of The Way with Carlos edging towards his personal nirvana.

What could have been self-indulgent tosh is made compelling by the quality and discipline of the musicians.View Deal

With the energy of their debut and the alchemy of Abraxas, Santana’s third album saw them refining and honing their Latin-rock formula still further, and followed it’s predecessor to the top of the charts.

The steaming Batuka sets the scene, leading to the irresistible No One To Depend On and the more elaborate, jazz-tinged Toussaint L’Overture. The soul-driven Everybody’s Everything showed that Santana were still open to exploring new avenues. And the percussion section gets a boost with contributions from Coke Escovedo, particularly on the blistering Jungle Strut.

III is probably as far as this particular direction could go.View Deal

Fresh from recording the Love Devotion Surrender album with John McLaughlin, Carlos returns to Santana, bringing along McLaughlin and their shared devotion to the late jazz giant John Coltrane – most evident on the title track.

He also brings Coltrane’s widow Alice, who supplies the slow, evocative Going Home that starts the album and begins the intoxicating whirl of styles and virtuoso performances that continue to blur the distinction between rock and jazz.

Genre distinctions are blurred still further, but Carlos’s reassuring guitar and the simmering Latin beats give the album a cohesion and identity.View Deal

Recorded in Japan in quadraphonic sound, Lotus was originally released as a Japanese-only triple album set with a lavish sleeve that opened out to cover the average living room floor with a series of increasingly kitsch religious images.

But there’s nothing kitsch about the live splendour of the ‘new’ Santana band that, which is in overwhelming form. The opening half hour is an almost transcendental experience as they gradually build the tension until Every Step Of The Way provides exquisite relief and paves the way for a torrent of classics from Abraxas.

The remaining 90 minutes is a glorious indulgence.View Deal

Feeling disillusioned and restricted by continually having to flog the Santana ‘brand’, Carlos finally decided to follow his instincts on what is effectively a solo album. It certainly invigorated his senses again. He hooks up with drummers Buddy Miles on the bluesy Bailandro/Aquatic Park and Tony Williams on the jazz-rock ‘Trane.

But the real gems are Bella, a restrained but wonderfully expressive ballad for his daughter, and the title track that starts with a bluesy jam before Carlos drifts off into his own spiritual Zen, playing with an exquisite passion. It catches the unadulterated essence of Santana’s playing so well that it won him a Grammy.View Deal

Riding on the back of their incendiary Woodstock appearance, Santana’s debut catches the raw and potent power of the band. Rock audiences are introduced to Latin beats and rhythms by the spectacular trio of conga player Mike Carabello, timbales player Jose Chepito Areas and rock-solid drummer Mike Shrieve.

Greg Rolie’s keyboard textures and understated vocals give Carlos a sturdy foundation for his emotive guitar playing, the songs are generally constructed around jams and riffs, and closer Soul Sacrifice is a tour de force that was their calling card at Woodstock (now included among the bonus tracks).View Deal

A beacon in a morass of mediocre Santana albums from the period. Signing to a new label after 25 years gave Carlos the impetus to return to a more direct recording style, unencumbered by fashion-conscious producers.

The fact that many tracks are dedicated to recently dead heroes (the title track is a tribute to Bob Marley, the cover of Marvin Gaye’s Right On is given an ambitious, Cuban-styled treatment) gives the album an emotional edge.

His original mentor, Bill Graham, is celebrated on the pensive, melodic Gypsy and the more upbeat Grajonca. A Dios invokes the spirit of Miles Davis and John Coltrane with samples.View Deal

A calculated and successful bid to put Carlos back in the mainstream, masterminded by Arista boss Clive Davis who originally signed him to Columbia 30 years earlier.

Not only did it return Santana to the top of the charts for the first time since then, it also yielded nine Grammys, most notably for his collaboration with Matchbox 20’s singer Rob Thomas on the sultry and effortlessly catchy Smooth.

Put Your Lights On with Everlast is equally left-field and just as memorable. Other guests include Lauryn Hill, Wyclef Jean, and old sparring partner Eric Clapton, along with Ricky Martin’s producer. Carlos clearly relishes the challenge.View Deal