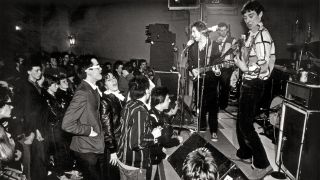 Banned by the BBC, the first major-label Buzzcocks single is a vintage blast of Shelley/Devoto provocation about the joys of wanking. The striking sleeve was designed by visual artist, Manchester muse and future Ludus singer Linder Sterling.

What Do I Get?

From 1977, the first in a glorious run of chart hits. Shelley’s infectious buzzsaw plea for _‘a lover like any other’ _allegedly reflected his unrequited feelings for Sterling, who was dating Howard Devoto at the time.

Ever Fallen In Love (With Someone You Shouldn’t’ve)

Taken from second album_ Love Bites_, the band’s highest-charting and much-covered punk-pop classic sounds like another heartbroken Shelley confessional, but was actually inspired by a line in the Hollywood musical Guys And Dolls.

This instantly infectious shot of amphetamine bubblegum angst rewinds Buzzcocks to their sarcastic punk-pop roots, as a sulky Shelley protests:_ ‘Life’s an illusion, love is a dream.’_

Why Can’t I Touch It?

Harmony In My Head

Written and sung by Diggle, the most adventurous of the band’s Top 40 hits is a skull-pounding modernist montage of fragmentary street scenes inspired by James Joyce’s stream-of-consciousness literary style, all wrapped in a fantastic swooping chorus.

Between Heaven And Hell

From 2006’s underrated eighth album Flat-Pack Philosophy. Diggle wrote and sings this portrait of midlife confusion: ‘Everything you thought you knew is different from before.’

From the band’s latest album_ The Way_. Shelley revisits the signature lovesick speed-pop style of his early Buzzcocks singles, but with the emotional wallop of middle-aged despair, plus some gnarly, Nirvana-ish bass guitar action.