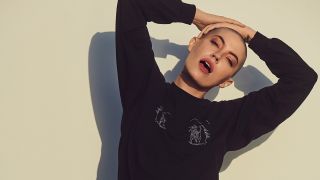 When I meet singer Bishop Briggs, the first thing I notice is her big, beaming smile. Dressed in a red sports jacket ahead of her headline UK tour, Briggs is in great spirits, immediately hugging and complimenting every person in the room.

Her joy is infectious, but it’s also misleading; you’d be forgiven for not realising that this same woman is responsible for recent album Champion, a cathartic heartbreak album that delivers as a complete outpouring of emotion. “It just feels like a total release of my soul," Briggs says. "That feels really liberating and scary all at once, but I feel really thankful for it. I just started showing up in people’s studios weeping, and I needed to create. More so than wanted to, I needed to”.

The cover of Champion shows Briggs close up, hands on her shaved head, staring cooly into the camera. Combined with her huge voice, and music that at times veers towards heavier influences, it’s a pretty tough first impression. But a signature tenderness sits barely below that surface, bursting to get out.

Briggs was born Sarah Grace McLaughlin in London before moving to Tokyo, where she discovered her love of singing through performing karaoke. She took her stage name from the town of Bishopbriggs, Scotland, where her family hail from. Even her tough-looking shaved head is for less-than-tough reasons – she made the decision after a friend got diagnosed with cancer: “I recall really early memories of wanting to shave my head. So when I did, and with the catalyst being someone I’m in love with and rooting for, it was such a crazy way to find out that this was the most me I had ever felt,” she says.

Three days later, Briggs performs at Islington Assembly Hall in London. Any cool exterior is nowhere to be seen. In its place is that familiar abundant, grateful joy bounding across the stage. Briggs is so excited she can hardly keep still.

She leaps around with the energy of a wound-up child unable to contain herself, running around and grinning while somehow still managing to hit every note. She struggles to keep a straight face throughout a performance of dark, alt pop song Jekyll & Hide. She doesn’t, but her fans scream along all the same. Even though this album deals with some of the most painful parts of Briggs’ life, she performs it with joy, and her infectious energy is reflected back in her fans. Briggs is singing about her own toxic relationship, but she’s laughing.

Briggs has a hybrid of diverse influences, from The Beatles and Led Zeppelin to confessional, huge-voiced female artists like Amy Winehouse and Adele. She loves them for their honesty: “These really hyper-specific stories and places and people, yet you connect to it because they’re simply telling the truth,” she says. “With this album I am talking about my flaws as a human being and as a woman and the things that I try and work on every single day. I think that’s what drew me to Amy Winehouse as well from a really young age, the the fact that she can just lay all her cards out there unapologetically.” That influence is evident across Champion, with confessional, hyper-specific lyrics on songs like Someone Else and Lonely showing Briggs working through her heartbreak.

Another of 27-year-old Briggs’ most defining influences is that of many people her age: emo. She lights up talking about her favourite artists: “I could cry just thinking about Bright Eyes!” she yells, animated. Onstage, she sings a medley of My Chemical Romance, Panic! At the Disco and Twenty One Pilots as their videos play on screens. “It is such a fulfilment of an emo dream of mine, I can’t even tell you. It’s the most fun to perform,” she says, and seeing her beaming onstage with the word “emo” scrawled on her jeans, it’s clear she means it. She says that her obsession with emo began when she was living in Hong Kong. “There was just such a fascination with these guys that weren’t afraid to wear eyeliner. They were being provocative and leaning into their femininity. I loved that,” she smiles.

Briggs’ debut album Church Of Scars was a hit, but Champion has secured her position in the heart of her fans. It’s full of emotional generosity, but that honesty came at a price. “The day that it came out was so bittersweet because it felt completely freeing to release something that honest, and then immediately it felt so terrifying,” she says. “I realised the day of the release that this is the stuff I talk about in therapy. There are certain things and lines in here that I haven’t read to them or sung to my closest friends.”

But she hopes that the album fulfils the same need that her emo favourites do for her: “I think the hope for the album was always that it would be the thing that people could turn to when they felt alone or when they felt deep in their heartache and didn’t know a way out.”

The process creating Champion, and exorcising her demons, was far from smooth. Of writing Someone Else, a stripped back song on which Briggs laments wanting to disappear, she says, “I went into that session and I thought that maybe my subconscious would tell me something different. Maybe it would say keep going! It’s not that bad! And the first thing that I wrote down was, ‘all I want to do is be alone,’” she laughs. “That was one of those songs where I couldn’t re-record that day. I couldn’t re-record the sadness of how I felt. I was crying through takes and when I listen back there are these imperfections and it felt important to keep it that way because it’s honest.”

Still, the process was cathartic. “I think it has offered so much healing, more than I knew. I just started showing up in people’s studios weeping, and I needed to create,” Briggs says.

So far, Briggs’ career is enviable. She’s performed on Jimmy Fallon, played Coachella, performed alongside The Killers. Her debut album, Church Of Scars, was released on Island Records in 2018. Still, it isn’t all good luck – a talented artist, after moving to LA, Briggs played in every venue she could until she got noticed. Despite her successes, when she talks about the year to come, Briggs is modest in her ambitions: “I think coming in 2020 is just even more intimacy and more writing and more of everything,” she smiles.

It’s clear that these aren’t things Briggs needs to strive for – intimacy is second nature to her.

Champion is out now via Island Records