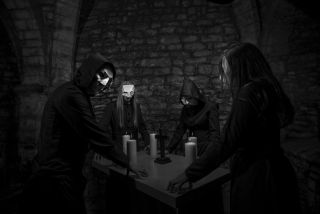 If you’re a fan of the carnivalesque, wandering around cities at 3am with a host of drugs in your system having a grand battle royale, and the kind of down-the-rabbit-hole, sense-warping realms where Chthulhu stirs… we might have something for you.

We are hosting an exclusive stream of Progeny Of The Singularity, by UK-based progressive black/doom metal outfit Lychgate. The song is the first single to be issued from the band’s impending EP, Also Sprach Futura, due on March 13 through Debemur Morti Productions.

Progeny Of The Singularity itself begins on a lyrsegic swirl of organs, hits a beat that tips your heart into panic-stricken overdrive and tips into the churning bowels of Hades, passing through its jazz lounge where lost souls smoke sulphurous cigarettes and glimpse riff-driven rays of tantalising light.

Also Sprach Futura be releases on digipack MCD, 10" vinyl, special edition 10" vinyl, and all digital platforms via Debemur Morti Productions on March 13. Find preorders at Bandcamp, the US label shop, and the Euro webshop.