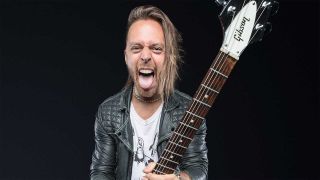 The metal fans of the internet were sent into fits of spasm this week thanks to some controversial remarks from Bullet For My Valentine frontman Matt Tuck.

Speaking to Metal Hammer, the Bullet vocalist said that metal has "gone a bit stale" and that he's trying to be different with their new record Gravity.

As you can expect, this led to thousands of comments flying around social media, spitting feathers and expletives towards the man who dared to say anything negative about metal. And one man in particular has penned an open letter to Matt Tuck himself.

In the letter below, Holy Roar Records owner Alex Fitzpatrick asks questions of the singer and the source of his comments, but also points out where creativity is thriving in heavy music.

As a fellow Welshman, I am more than somewhat disappointed with your recent statement that metal is ‘a bit stale’. I am only three years younger than you, and have run a predominantly metal label for over 12 years – I should probably only be listening to hip hop or ambient electronica at this point, like a jaded old git who has seen and heard it all. But no; I have never felt more excited and energised by the current state of modern metal, even more so by the UK scene. I am tremendously proud to champion and support our ever-evolving underground metal scene.

Your comments, sadly, suggest one of two possible things to me. Either you’ve fallen out of love with heavy music (which happens to some people, that’s fair enough, even if that does reek of laziness in itself) or your statement is somewhat of an excuse for your band's musical and stylistic shift. We know you’ve been vocal about wanting to be a festival headlining band for sometime – your ambition is genuinely admirable, but I think the way you are trying to achieve those goals is somewhat skewed. Sorry!

Every single day I am lucky enough to hear new bands that are pushing metal forward and keeping it fresh and exciting. Yesterday I discovered a band called LLNN and their album Deads sounds like Primitive Man playing Cult Of Luna songs in a cinema – incredible stuff. My personal revelation of the year, Møl, take song structures that are almost pop yet have a pure black metal intensity welded to shimmering shoegaze. Jaw-dropping. Then there’s Employed To Serve taking Will Haven-style down-tuning and throwing in elements of noughties metalcore and Slipknot. So. Fucking. Awesome. Oh, and maybe lets not forget Conjurer and the way they have taken the blueprint laid down by the likes of Mastodon, Baroness, Gojira and Opeth and turned it into viscerally heavy modern metal. Fucking sick.

There’s no reason that large, more mainstream, metal acts can't soak up the general climate of what is happening around (or ‘below’) them, and incorporate even just touches of the endless number of mega exciting sounds I am hearing – metal and non-metal – thereby making mainstream metal far more exciting and vital, whilst potentially helping to drag some bands out of the underground, should they so desire.

The other approach is to declare metal ‘stale’ and pursue a direction (in terms of music and your new albums artwork) that is reminiscent of Linkin Park and Bring Me The Horizon. I struggle to fully believe this shift is all down to new drummer Jason Bowld and his history with electronics in Pitchshifter, as you stated in an interview. I think it’s more akin to something like '…well it worked for Linkin Park and BMTH, and I want to headline festivals, so lets try it, because nothing else has pushed us through that glass ceiling to date.' Note: this is not a slight or diss on Linkin Park or Bring Me The Horizon.

Of course – much of the music I am championing is not selling out arenas or headlining festivals yet, but I’m pretty sure many people thought the same about Metallica, Slayer, System Of A Down or even Bring Me The Horizon the first time they saw them. I mean – I very much couldn’t foresee the rise of BMTH when I first saw them in a back room of a pub in Coventry playing to four people. True story.

Metal undoubtedly has to evolve and change to continue to be interesting, relevant and exciting, and to have a chance to continue to be world-conquering once today's dinosaurs have all died out. But throwing it under the bus by declaring it ‘stale’ wont help anyone, despite the free press it may have generated you.