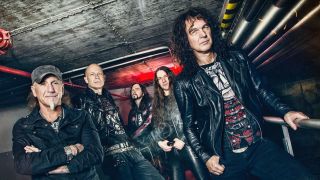 While the roots of teutonic metallers Accept can be traced back to the late 60s, and it’s been more than four decades since they first played the legendary Rock am Ring Festival in Germany, the band didn’t really get going internationally until signing a worldwide deal in the early 1980s and Balls To The Wall became an unlikely hit on MTV.

More than three decades later Accept are still going strong, and are about to release their 15th studio album, The Rise Of Chaos. It’s out next month on Nuclear Blast, and guitarist Wolf Hoffman is still coming to terms with the years and the numbers and how it’s all worked out.

“Back in those days, the oldest guys were in their thirties,” says Hoffman. “There were no rock musicians who were 50 years old! That didn’t exist back then. When we started with Accept I was 16. In those days, the Rolling Stones were probably not even 30! There was nobody older than that, and nobody knew how long you could do this. It’s a crazy thing.”

The Rise Of Chaos will be released on August 4, and is available to pre-order now.