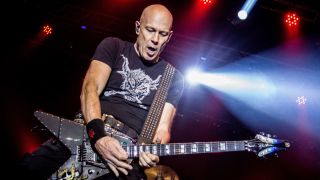 Accept’s Wolf Hoffman has been coming up with killer guitar riffs for decades (Fast as a Shark, Balls to the Wall, Metal Heart, etc.) - all of which is on display on his band’s latest release, the DVD/CD set, Restless and Live.

When asked to name his “5 Essential Guitar Albums,” he threw us a curveball. “I’d rather tell you my influences when I was a kid growing up and my favourite guitar players, because I don’t really have favourite albums.” Fair enough - here we go…

The biggest influence on my playing I would say is probably Ritchie Blackmore. Who in turn, influenced a whole generation of bands - especially when I grew up in the late ‘70s and early ‘80s - he was the guy in Germany that everybody admired. He was a Strat player, and I always loved Strat players. He also had that classical influence that I liked a lot. He was also very melodic, which I like.

The next guy in line was sort of like that, but on another scale - Uli Jon Roth. Who I think is probably the most talented guy I know on guitar, to be honest. Lovely guy. And he’s also a Strat player and very melodic.

I also like AC/DC a whole lot. Angus Young is one of the guitar players that never gets mentioned in “who influenced you?” questions. But he definitely has influenced my style of playing a lot, the way he writes the riffs and the way that he solos in a bluesy style. He’s very basic and simple in the way he plays, but he does that really, really well. I’ve always liked his playing. Out of those elements, I formed my own style, I believe.

Both Judas Priest guitar players have influenced my way of thinking and playing a tremendous amount. We toured with them in the early ‘80s, and that tour was sort of the “coming of age” tour for us, where we toured for the first time with professional musicians. And those two guys really were our heroes - the way their guitars sounded and the way their riffs sounded on stage was just phenomenal.

If you want an example of a guy who I think nowadays is phenomenal is Joe Bonamassa. Obviously, he’s not a metal player, but man, he can play anything he wants, I think. That sort of bluesy style that he does is just mind-blowing. He’s got a tone that is really remarkable. I also like his vibrato a lot - the way he bends the notes and the way that it sings. It reminds me a lot of Gary Moore. He can really express a lot with just a few notes, and he can also shred like nobody’s business.

The 10 best Accept songs as chosen by Andy Sneap