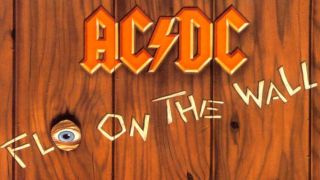 The summer of ‘85 brings back some fantastic memories. I got my driver’s license, my first job as a lifeguard at the local swimming pool, and my biggest worry was how I was going to hook up with the bikini-clad beauties I was so bravely guarding. And the soundtrack to it all? AC/DC’s Fly On The Wall.

And to this day, I can’t understand why it’s so under-rated.  Classic Rock included it in a list of the Worst Albums Ever, Rolling Stone’s original review dismissed it as sexist and incomprehensible (“You’d never guess how sexist and politically incorrect all this is if you didn’t read the lyric sheet, because you sure can’t make out a single word coming out of the dentist’s-drill glottis of Brian Johnson”) and at the time it went to just no.32 in the Billboard album charts – quite a drop from the multi-million selling triumph of Back In Black and US no.1 For Those About To Rock, just four years earlier.

It makes no sense. FOTW is the great lost AC/DC album and here’s why.

In 1985, AC/DC were in a little career trouble. A new breed of rockers were selling millions of albums via mass MTV exposure. Ratt, Motley Crue, Twister Sister and the like were darlings of the channel. Unlike the highly dramatic turmoil and triumphant return surrounding Back In Black, they now faced maybe a more daunting challenge to any veteran rock band – they were teetering on being passe.

1983’s Flick Of The Switch felt a bit “old fashioned” to my barely teenage self (I love it today for that very same “old fashioned” feeling). The band needed to grab the attention of younger American rockers and the five promo videos they did for Fly – Fly on the Wall, Danger, Sink the Pink, Stand Up, and Shake Your Foundations, all released on a 5 track VHS at the time – did exactly that. Suddenly we got to see the high voltage, stop-your-grinnin’-and-drop-your-linen-charm for ourselves. Sure, the Fly videos were cheeky (what band’s weren’t back then?) but there was an authentic glee about them that came across as you watched.

MTV embraced the boys. The videos from Fly perfectly segued into Who Made Who – the pseudo-greatest hits soundtrack to Stephen King’s Maximum Overdrive movie (that included both Sink The Pink and Shake Your Foundations from Fly) – later the same year. Who Made Who’s title track and a new concept video of Shook Me All Night Long proceeded to get massive airings at MTV. In short order, Fly had helped them again grab the youth of America and in turn set up the band’s next three albums for MTV and sales domination. And while the album peaked in the US at #32, slow burn sales from touring and MTV exposure helped it gain platinum status regardless. Not too shabby for “a disaster”.

The production on Fly was by the Young brothers themselves and is one of the problems people have with the album. The mid 80s were the beginning of the burgeoning digital audio production movement, and while it was fashionable at the time, the trendy processing left a good amount of mid 80s rock records sounding a bit thin and cold, a sound that isn’t quite so timeless today. Fly clearly sounded like an attempt to keep up with the poodle-haired Jones’s whose albums were flying off the shelves at the time. Who can blame them? In all fairness, it still sounded like AC/DC, just not your older brother’s AC/DC.

Of course, this new approach is in itself a sore spot for AC/DC purists. If Powerage is more your speed, then I completely understand your position in the matter – I love the bloozy looseness of the Bon era as much as anyone. But, growing up in the 80s, I’m a big fan of the Brian era too and this is the same approach that produced the stadium-rattling Thunderstruck amongst others. Put Thunderstruck and Shake Your Foundations on back-to-back and you’ll see they’re really cut from the same cloth.

At the end of the day, it’s the music that matters – and to my teenage American ears, the music fucking rocked. That opinion hasn’t changed with age. If you listen now to tracks like Fly On The Wall, Shake Your Foundations, Back In Business and Sink The Pink, it’s inherently ass-kicking AC/DC with that slinky groove-and-grin present throughout. For me, it’s the last of their albums to be a complete collection of quality, well-thought-out songs.

On a track-for-track basis, Fly still stacks up against the subsequent albums. Blow Up Your Video was full of pedestrian filler after the singles Heatseeker and That’s The Way I Wanna Rock ‘N’ Roll. Even the commercially huge Razor’s Edge is, in truth, a fairly lean affair beyond the ever awesome Thunderstruck, Money Talks and Are You Ready singles. Ballbreaker and Stiff Upper Lip followed suit.

That said, in many ways the album seemed to reinvigorate DC. After Fly, the band made considerable efforts to keep up with the times and began consistently utilising established producers of the moment – Rick Rubin and Bruce Fairbairn to name a couple – to oversee album production. Gone were the afterthought live clips: every subsequent single had a big production video attached to it. Fly had walked into the 80s rock party, nicked a whole new generation of rockers, and reignited a stalled career.

Side note: The capture of serial murderer Richard Ramirez, aka The Night Stalker, also threw the band’s name into the national spotlight in 1985. A satanically-influenced psycho with a purported love of AC/DC – police discovered an AC/DC baseball cap at one murder scene, while a childhood buddy confirmed DC were one of his favourite bands –the news coverage around his capture meant that AC/DC were caught up in the Satanic Panic of the 80s.

People magazine said that Ramirez’s mental illness, mixed with his drug use and the fact that he was being “reprogrammed by the heavy metal lyrics of AC/DC and Judas Priest” led to his killing spree. Soon, city councils were trying to ban the group from their venues. (A bewildered Angus Young, taken to task for songs about Highways to Hell, pointed out that, far from being Satanic anthems, DC’s songs were all a bit tongue in cheek. “What happened to people’s sense of humour?” he asked the LA Times.)

As we all know, in rock’n’roll terms there ain’t no such thing as bad press where Beelzebub is involved. The US mainstream media and moral majority waggling a finger turned out to be weirdly perfect timing for a flagging band with a hopeful new album. AC/DC were dangerous again. That’s ‘Murica for you, folks…